I don’t know what’s going on with Amazon these days, but something is really messed up there. Last week some of my books were marked “unavailable” for several hours and then they were back with no explanation as to why it happened. Then yesterday morning my newest book, Big Lake Ninja, had seven 5 star reviews. Every author appreciates reviews, the more the better. So I was disappointed when I happened to check it around 5 PM and all of its reviews had disappeared. An hour later they were back, and then they were gone again. Hopefully they will be back to stay soon, but with Amazon you never know.

In other news, it seems like the ongoing website issues I have been having with the blog seem to be fixed now. For a long time people who subscribed to it were not getting the daily blog, only the previous day’s post. Then suddenly people trying to log on were getting a message saying that the website had been hijacked. We ran all kinds of scans on it and nothing showed up, and finally I had to pay Go Daddy even more money than I already am and they did something to remedy the issue. But when I asked them how to prevent it from happening again, they really weren’t too clear on that. I guess their answer is always, “just throw more money at us.”

Something weird happened while we were having dinner Sunday afternoon. I started feeling very lightheaded and disoriented and had a tingly feeling in my head. I’m glad Terry and our friend Jim Lewis were with me, because there is no way I could have driven home. It was hard enough just standing up and walking out to the car.

I’m not sure what caused it, but it persisted into the evening. By bedtime it had pretty much gone away, but I had a headache and was very tired. Yesterday morning I woke up and felt like I had a hangover, but by the afternoon I was feeling a lot better. Not completely back to my old self, but better than I was. I put a call in to my doctor and am waiting for him to get back to me.

I spent some time working on my next John Lee Quarrels book, Dead Romeos, yesterday but my head was still kind of foggy and I was having trouble concentrating. I managed to get 3,000 words in, which fell short of the 5,000 word goal I had for the day, but it’s a start.

Since I’m still not at 100%, this is about all you’re going to get out of me today. Hopefully tomorrow I’ll be able to do a better blog for you.

But before I go, here’s a chuckle to start your day from the collection of funny signs we see in our travels and that our readers share with us. I’ve never been a fan of veggies in any form, but when they take the fat away, what’s left? Just lettuce? 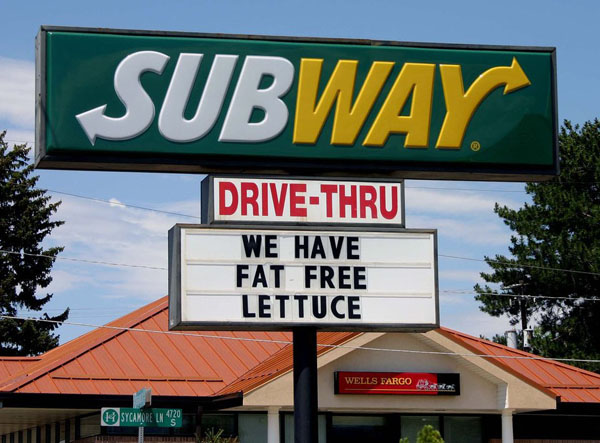 Thought For The Day – We are sometimes taken into troubled waters not to be drowned, but to be cleansed.