Note: I posted this blog one year ago today, but it seems nobody got the message. Or if they did, they forgot. So here we go again.

Happy birthday to my country. If I haven’t said it lately, I love you. I love the personal freedoms we all have because millions of brave men and women laid their lives on the line, and even sacrificed them to protect those freedoms for their fellow citizens. I love you not just for the beauty of your mountains, and your seashores, and your forests but also for your small towns and big cities. I love you for your people, whether they wear three-piece suits and carry briefcases when they get on the subway to go to work, or if they put on bib overalls and heavy boots and climb onto a tractor at the start of their workday. I love you for your universities, your libraries, and your roadside produce stands. Yes, America, I love you.


Now, that being said, America, grow up! Enough with the childish bickering back and forth because one candidate won or another candidate lost, or whatever. Enough with the stupid memes on social media that portray whoever you’re against as the Big Bad Wolf ready to blow the house down. Enough with the division that has broken up friendships and even family relationships. You are 243 years old today. Stop acting like you’re a spoiled four year old child.

When did the two party system become the “My party or else” system? While I love this country, I absolutely hate how polarized we have become. I had a long time friend tell me I was a liberal snowflake because we didn’t agree on something that President Trump did. A few days later another friend of long-standing told me I was a deplorable, not much more than a cross burning KKK member, because I own not one, but two AR-15s. She said it was people like me that are responsible for all of the school shootings happening in this country. Nope, you got the wrong guy. I haven’t shot anybody in over 45 years, and it wasn’t a kid and it wasn’t at a school.

Calling people names because they may not agree with you about politics or anything else, is like schoolyard bullying. What’s next? Telling them they have cooties?

The other day when we were shopping at Michael’s in Daytona Beach, they had window stickers for cars that said My Dog Is A Republican and My Cat Is A Republican. They probably had the same thing saying somebody’s critter was a Democrat, just for equal time. Hey, heads up, your dog licks his butt and doesn’t give a damn about politics. Your cat craps in a box, and he doesn’t give a damn about politics either.

Here’s the thing nobody seems to remember – we are all Americans! Not one of us was born a Republican or Democrat, a conservative or a liberal. And nowhere in any Bible I’ve ever read does it say that when we die there is a Republican heaven or hell, or a Democrat heaven or hell.


Eventually Trump will be out of office and somebody else will replace him. Some people will be thrilled and others will be pissed off, just like right now. In the meantime, how about we all grow up and get back to being Americans?

And finally, to lighten the mood, here is a funny sign just for today. 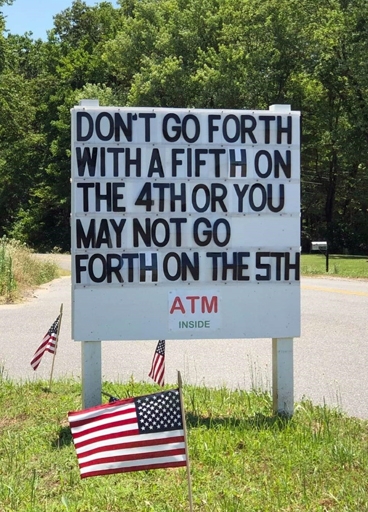 Thought For The Day – Life is short, make sure you spend as much time possible on the Internet arguing with strangers about politics.