While we usually think of southern states when we think of Civil War battles, Missouri was actually a hotly contested state and saw many bloody skirmishes. While not the largest battle fought on Missouri soil, one of the most vicious was certainly the clash in the Missouri River port city of Lexington.


During the first year of the war, factions faithful to the Union had taken control of much of the state. By mid-year, the pro-Southern governor and members of the legislature had been driven into exile and a provisional pro-Union government had been created to rule the state.

Things began to turn around for the Southern sympathizers in early August, 1861, with the Union defeat at the Battle of Wilson’s Creek near Springfield, which set the stage for a rebel offensive into the heart of the Missouri River valley. By the end of the month, 7,000 men of the pro-Southern state guard, led by Major General Sterling Price, were on the march.

Price’s troops were an ill equipped ragtag bunch of farmers and storekeepers. They were armed with whatever they brought with them from home, everything from shotguns to squirrel rifles, even old flintlock muskets. Very few had more modern weapons such as Sharps or Maynard rifles. Not more than a hundred of them wore uniforms.

They were going up against the better equipped, better trained, more disciplined Union Army, but they were buoyed by their victory at Wilson’s Creek and confident of another win.

In the days before highways and railroads crisscrossed the landscape, the Missouri River was a valuable asset for moving men and equipment, and Lexington, strongly pro-Southern, was a key to control of the river. Lexington, besides being an important river port, was also a source of hemp, which was grown locally, baled, and shipped to manufacturers of rope and cloth bags.

With Price advancing toward Lexington, on September 9, the 23rd Illinois Infantry, under Colonel James A. Mulligan, arrived in Lexington to reinforce the small Union command occupying the town. One of the first things the Union Army had done when it occupied Lexington was to seize over $960,000 from Lexington’s banks to deprive the Southern forces of badly needed money.

Colonel Mulligan fortified his 2,700 troops inside the grounds of the Masonic College on the north end of town. By then Price’s army had swelled to nearly 12,000 men, and more recruits were pouring in daily from the surrounding countryside.

Price’s men arrived in town on September 18, and completely surrounded the college. The first shots of the Battle of Lexington were fired. For the next nine hours, the Union soldiers, huddled on the college grounds, endured a continuous bombardment of shot and shell.

The southerners seized the house of Oliver Anderson, which had been pressed into service as a Union hospital. Outraged by this breach of the etiquette of war, Colonel Mulligan ordered the house to be retaken. His men stormed the house in a bloody countercharge that saw hand to hand combat on the house’s first floor. Though they had suffered heavy casualties, the Federal troops could only hold the house for a short time before Price’s men captured it again and drove the Yankees back to their trenches. 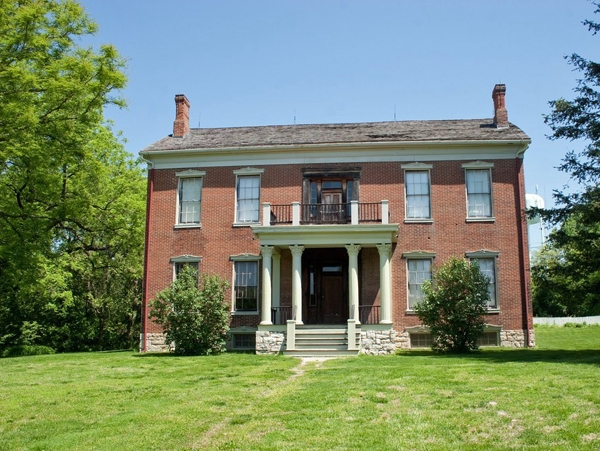 By the second day of the battle, the trapped Union soldiers had run out of water and were suffering from thirst and heat. Though the southerners had them surrounded, they could not advance on the soldiers inside the college because they had to cross a wide span of open ground and were easy targets for the long range rifles and cannon of the Union troops.

On the morning of the third day, a strange sight met the Union soldiers. Price’s men had emptied the riverfront warehouses of hemp bales waiting for shipment and wrestled them to the battlefield. Stacked two bales high, the southerners began rolling the heavy bales toward the Union lines.


The bales proved to be effective protection from the Union fire, because neither bullets nor cannon balls could penetrate the dense hemp bales. By early afternoon the moving breastwork was close enough to the Union lines to allow a charge, and terrible hand to hand fighting broke out as men died impaled on bayonets or were clubbed to death with rifle stocks. Mulligan and most of his officers were wounded, and he realized that the only way to save his men’s lives was to surrender.

The Union troops lost 39 men and suffered another 120 wounded at what became known as the Battle of the Hemp Bales, while Price lost 25 men and had 75 wounded. The victory allowed Price to capture five artillery pieces, 3,000 rifles, and 750 horses, all of which were much needed by his under-equipped army. He also recovered $900,000 of the money the Union had looted from the local bank, and he became a hero throughout the South.

The victory was short lived, however. In response to the defeat at Lexington, General John C. Fremont, the Union commander in Missouri, mounted a massive force to drive Price from the state. Price had little choice but to retreat back to southwest Missouri, and Lexington and the Missouri River Valley once again were under Union control.

Today 100 acres of the old battlefield make up the Battle of Lexington State Historic Site. Included are a visitor’s center with displays on the battle and an excellent free video that tells the story of the Battle of the Hemp Bales.

One Response to “Battle Of The Hemp Bales”