When I was a kid, I was so accident-prone that my father used to say I should probably get a job in a mattress factory. Then he would think about it for a minute and say no, I would more than likely knock a stack of mattresses off on top of me and smother myself. My mother, bless her heart, used to say (hopefully, I think) that I would grow out of it. Well, here I am, well past my 66th birthday, and I’m still not exactly as graceful as a gazelle. Not even close. Anytime I’m left alone for very long, you might hear the word “oops” if you are listening. Actually, you would probably hear some other words, too, but this is a family blog, so we won’t get into that.


I have just had two oops moments in two days. At least I’m consistent, right? The first one was Monday evening, when I somehow lost my balance and tripped in the bathroom, bouncing off the door before landing on the floor. When I was young paratrooper I was taught to tuck and roll. Apparently I’m not a young paratrooper anymore. I did manage to turn enough to land on my right side, and when Miss Terry came to see what I had done this time I was laughing at myself so hard it took a minute or two to tell her. Fortunately, I didn’t break anything, though I do have a sore shoulder and hip, and a badly bruised dignity. I wasn’t in the shower, this wasn’t a slip, it was just a fat guy tripping over his own feet.

My second was an almost oops yesterday afternoon. I ran down to the chiropractor’s for an adjustment in case I had knocked anything more out of whack than it already is. Coming home, I made a stop at the post office and another one at Walgreens to pick up a prescription. As I was driving through the Walgreens parking lot a police car was stopped off to one side and the officer was talking to the dispatcher on his telephone. Not seeing me, he made a U-turn directly in front of me. I slammed on the brakes and the Explorer came to an abrupt stop less than a foot from his driver’s door.

He quickly got out to ask if I was okay, and apologized profusely, telling me it was all his fault and he should have looked before he pulled away. Since I didn’t actually hit his car, there was no damage to either of our vehicles, but he did offer to call a supervisor to take a report if I wanted him to. I didn’t see any reason for that, so we shook hands and went our separate ways. I’m not sure I want T-boning a police car on my driving record, no matter who was at fault.

Back at home, our friend Jim Lewis had gone to Ocean’s Seafood market in New Smyrna Beach and picked up some large red snapper fillets. Miss Terry cooked them, along with some roasted potato wedges and veggies, and we had an outstanding meal. Since Jim bought the fish, and Terry cooked it, I decided my contribution to the dinner would be to have a second helping. It was just as good as the first. And I didn’t even choke on a fishbone. That’s another oops that I avoided. Two in one day. Could my luck be changing?


And in closing, here’s a chuckle to start your day from the collection of funny signs we see in our travels and that our readers share with us. I think somebody needs a new calendar! 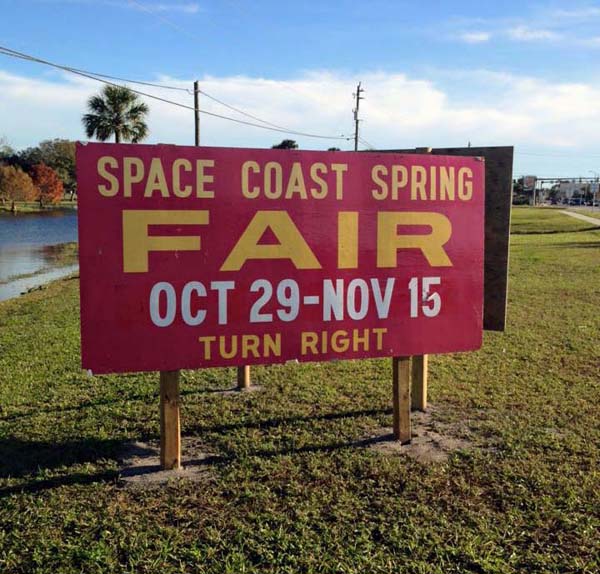 Thought For The Day – Legend says that when you can’t sleep, it’s because you are awake in someone else’s dream. So if everyone could stop dreaming about me, that would be great.

One Response to “Oops And Almost Oops”