Nick's Blog » I’ll Get To Them

I still have several stories to share with you from our trip to Alabama and Georgia a couple of weeks ago but they are going to require quite a bit of time to write and to sort through all the photographs to decide which ones to use. I’ve been busy working on trying to get my new book done and haven’t had the time for that yet. But I promise, I’ll get to them.


I was chugging away in my new book yesterday and thought I might be wrapping it up before the end of the day. But then, like so often happens, one of my characters did something totally unexpected and the story took off in a new direction, completely changing the outcome. I know some authors who work from an outline and stick to it rigidly, but that doesn’t work for me. I’m more of a seat-of-the-pants type of writer, and more often than not I’m as surprised when I get to the last page of one of my books as the readers are. And I love it. I wouldn’t have it any other way! Even with the changes, with any luck I’ll still wrap it up today.

Several people wanted to know why I’m not getting any Social Security and have to pay my Medicare out-of-pocket, which I mentioned in yesterday’s blog. Here’s what’s going on. Though our full retirement age was 66, Terry and I both chose to start drawing Social Security at age 62, because frankly, we needed the money. We were still dealing with the aftermath of her cancer, which took away all of our retirement funds when the insurance company refused to cover her treatment. Even though that was 20 years ago, it took a long time to overcome all of that and get back on our feet. Never, ever, think that just because you have health insurance you will be covered in the event of a catastrophic illness or injury. Trust me, I’m telling you from personal experience, if there’s a way for an insurance company to weasel out of paying, if there’s a tiny loophole out there hidden in all the fine print, they’re going to find it and use it.

The way Social Security is set up, if you earn more money than what’s allowed every year, and you’re between age 62 and the year prior to your reaching full retirement age, they will hold back $1 for every $2 you earn above the limit. The problem is, some people, especially self-employed people, may not know how much they will make in a year. When my books started taking off and the income started getting bigger, it put me over the limit by quite a bit. So much so that I got a letter saying that they would be withholding what I had been paid in Social Security benefits one year, and that money would be applied to the “overpayment”. But then, at the end of that year I had again earned more money than they allowed, so the process repeated itself. And then the same thing happened again. If I would have waited until I was 66 to start collecting benefits, I could have collected my full Social Security and made whatever I wanted to without that hanging over my head. But sometimes we do we have to do. And though it really irks me, because I’m currently paying more into Social Security than I will ever receive, I can’t complain because I have been very fortunate in the huge uptick in our income since I began writing books full time. I turned 66 in October of last year, so hopefully things will eventually get back on track.

In other news, our friend Jim Lewis had picked up some nice cod fillets at Publix and brought them over for Terry to cook for dinner yesterday. Combined with baked potatoes and a side of veggies, they were absolutely delicious. We also managed to get in a couple of games of darts, and Terry defeated us quite handily both times. In looking back, the last time we played she did the same thing. Jimmy says it’s just luck, but I suspect there’s some talent involved, too.

Some friends have asked if we are going to do any traveling this summer while it’s so hot, or if we have any other trips planned at any time in the foreseeable future. There is a crime writers conference in North Carolina in early August that I’m thinking about going to, and if we do that, we might swing over to the coast afterwards and visit Charleston, South Carolina and Savannah, Georgia on our way home. And then in February of next year we are having a big family reunion in Arizona to celebrate Terry’s dad’s 90th birthday. Aside from that, we don’t have any plans that are set in concrete. However, just like when we were fulltime RVers, our plans are always written in Jell-O, and who knows when we might stir it up and take a road trip? Even though we sold our motorhome, we are still very susceptible to hitch itch.


And in closing, here’s a chuckle to start your day from the collection of funny signs we see in our travels and that our readers share with us. 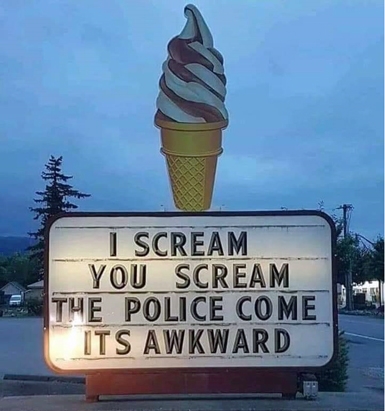 Today is your last chance to enter our Free Drawing for an audiobook of Stillborn Armadillos, the first book in my John Lee Quarrels series. To enter, click on this Free Drawing link or the tab at the top of this page and enter your name (first and last) in the comments section at the bottom of that page (not this one). Only one entry per person per drawing please, and you must enter with your real name. To prevent spam or multiple entries, the names of cartoon or movie characters are not allowed. The winner will be drawn this evening.