No, I haven’t been playing with dynamite or hand grenades, though I have in the past and somehow managed not to blow myself up. But I don’t do that anymore, deciding that I should quit while I was ahead. Or still had a head. No, yesterday Miss Terry and I went to the gun show at the Volusia County Fairgrounds. There was nothing I was really particularly interested in, we just needed a day out by ourselves. And who knows what one might find on a vendor’s table that you can’t live without?


As it turned out, there was nothing I couldn’t live without. I have owned, shot, played with, bought, and sold so many guns over the years that it takes something pretty special to get my attention. And whatever that might be, it wasn’t there.

Listening to some of the conversations of the people around us, I told Miss Terry that while I have been involved with guns since I was a little kid and I enjoy shooting them, there are a whole lot of gun people I don’t want anything to do with.

Back in the summer of 1974, when I got out of the Army, I purchased a new Colt.45 semiautomatic pistol. I remember the guy at the gun shop telling me it was a good thing I bought it then, because the gun grabbers were going to take all of our firearms away any day now. Back then, getting a concealed carry permit was just about impossible and lots of places like national parks didn’t allow you to possess a firearm when you visited. Since then I have owned several hundred guns, I can carry in a national park, and I currently have concealed weapons permits from two states that allow me to carry a handgun in over 30 states due to reciprocal agreements. And nobody’s come to take my guns away yet. I kind of feel like that guy way back in 1974 may have lied to me.

Or maybe not, because it seemed like about one out of three people at the gun show was talking about how the gun grabbers are going to be kicking in our doors any day now. Another one out of three was talking about what bad asses they are (note, if somebody has to tell you how tough he is, he really isn’t), and how they would blow anybody away that gave them a problem. Of course, none of them have ever heard a shot fired in anger, and if someone pointed a gun at them they would probably mess their pants. The testosterone was like a fog in the place.

When we were done at the gun show we stopped at a gun club’s shooting range. Having lived much of my life out West, I’m used to just going out in the boonies and shooting whenever I wanted to. Here in Florida you can’t do that. You have to join a gun club, and it can be very expensive. Some in this area are over $400 a year. Thanks, but no thanks. This range was also very expensive to join, and like so many gun places I’ve been to, they were not at all welcoming. They seem to assume that anybody showing up to ask a question is there to deny them their Constitutional rights. I’ve gotten warmer smiles from my ex-wives’ attorneys. Then again, I guess that makes sense, because those guys sure made a lot of money off of me over the years.

One place that is affordable and very welcoming is the Volusia County Trap and Skeet Club in New Smyrna Beach. We stopped there a while back and were impressed with the facilities and how friendly everybody was, and yesterday we decided to swing by again. I used to shoot trap years ago and I really enjoyed it, and I think it’s something Terry would enjoy, too. While she’s a pretty good shot with a handgun, she hasn’t spent much time with rifles and shotguns, and I wasn’t sure what might work for her. One of the volunteer range safety officers quickly broke out a Remington 1100 semiautomatic 20 gauge and handed her some shells and said to go try it. He wasn’t trying to sell it, just happy to help out a newbie get some ideas of what would work for her. Terry didn’t bust any birds, but she enjoyed shooting it and said there was no kick at all. A lot of serious trap shooters use a 12 gauge shotgun, but a 20 will do the job just fine for our needs. You know, she does have a birthday coming up…


And finally, if you don’t do anything else today, do yourself a favor and download a free copy of my pal Jason Deas three-book Benny James mystery series box set. Jason is a great guy and a good writer too. I think you will enjoy it. And please be sure to leave a review. They really help authors. 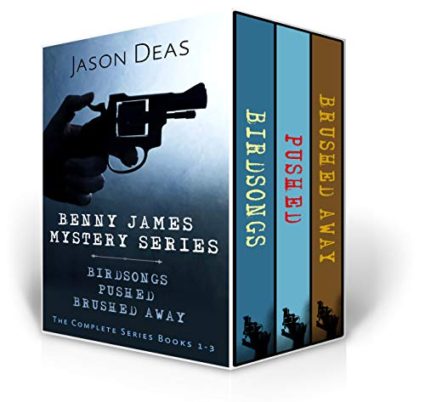 Today is your last chance to enter our Free Drawing for an audiobook of my friend Ken Rossignol’s Pirate Trials: Famous Murderous Pirates. To enter, all you have to do is click on this Free Drawing link or the tab at the top of this page and enter your name in the comments section at the bottom of that page (not this one). Only one entry per person per drawing please, and you must enter with your real name. To prevent spam or multiple entries, the names of cartoon or movie characters are not allowed. The winner will be drawn this evening.

Thought For The Day – I can’t tell if I attract crazy people or if I make them crazy, but I’m definitely seeing a pattern here.

4 Responses to “Things That Go Boom”