Located on the eastern edge of Great Smoky Mountains National Park, Cades Cove, Tennessee is a time capsule from the past, offering the opportunity to glimpse a time when people carved a life out of the very land they lived upon.


Cades Cove was originally known as “Kate’s Cove” after a Cherokee Indian chief’s wife. For hundreds of years the Cherokee hunted in Cades Cove, a broad lush valley surrounded by mountains. This was a sacred hunting ground to the Indians, and archeologists have found no evidence of major Indian settlements. The first Europeans settled in the cove sometime between 1818 and 1821, and by 1830 the population of the area had increased to 271. 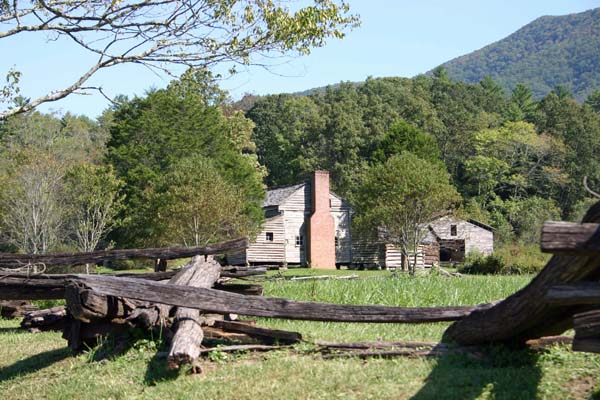 John and Lurany Oliver were the first settlers in Cades Cove. There was no treaty with the Indians allowing settlers in the region, and often this intrusion into Cherokee land resulted in friction. The Olivers made friends with the Indians and the Cherokee helped them survive their harsh first winter in the cove. A year later, the Calhoun Treaty gave Whites the right to settle in the cove.

The Olivers managed to survive and thrive in the wilderness of Cades Cove, and descendants of the Oliver family still lived in Cades Cove when it became part of the Great Smoky Mountains National Park. John Oliver is buried in Cades Cove at the Primitive Baptist church, which he helped found.

The pioneers who lived here were a tough and self-sufficient lot. They didn’t have much money, but they were hard working people who still managed to live comparatively comfortable lives. One such example was Becky Cable.

“Aunt” Becky Cable was a remarkable woman who left her mark on Cades Cove in her long and productive life. After her brother and his wife became seriously ill, she took over operation of their farm and raised their children. For decades, Cades Cove residents welcomed strangers passing through to sleep in their homes, and the cove became a popular stopping place for travelers. Many Cades Cove cabins actually had a special “stranger room” to provide shelter for travelers. Around 1900, the people of Cades Cove began to charge a modest rate for hosting visitors. Becky Cable opened a boarding house on her brother’s farm, the predecessor to the 8,000 inns, bed and breakfasts, and rental cabins in today’s Great Smoky Mountains National Park. Becky Cable died in 1940 in her Cades Cove home at age 94. 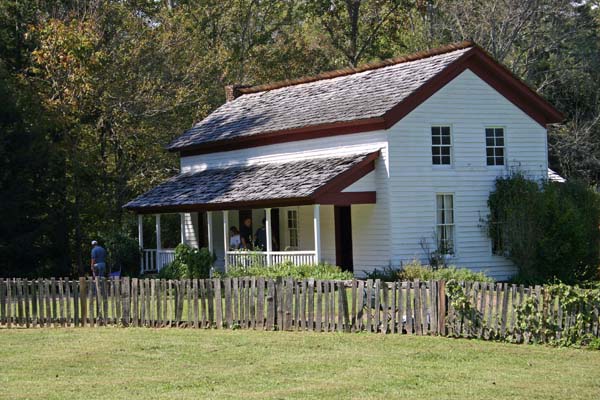 Religion was an important part of pioneer life, and Cades Cove had several congregations. The Cades Cove Baptist Church was established in 1827. Before that, cove residents would attend Sunday services in other communities, like Wears Cove and Millers Cove. Campground revivals in Tuckaleechee Cove (present day Townsend) were an important part of religious worship. The Cades Cove Methodist Church soon followed the Baptist Church. Over time debates over Biblical interpretation, divisions caused by the Civil War, and other disagreements resulted in several splinter groups breaking off from the original congregations. 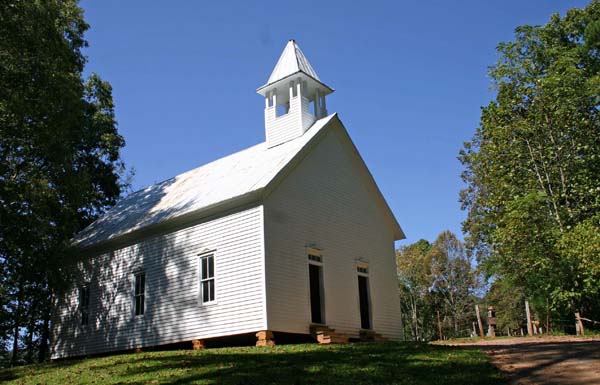 The people of Cades Cove were self-sufficient pioneers, but occasionally they needed things they could not make for themselves. Maryville, 20 miles away over primitive roads, was the trading hub for the area. Going to Maryville was no simple jaunt to the store; the trip by horse and wagon usually took three days – one to get there, a day to trade goods from the cove and purchase supplies, and a third day to travel back home. Over time, a series of general stores opened in Cades Cove, selling supplies ranging from sugar and kerosene, tools, and yard goods. Cove residents, always strapped for cash, often traded eggs and chestnuts for the goods they needed.

Pioneer life was hard in the cove, and most people only lived to their mid 40s or early 50s. People married young, usually in their teens, and though they had large families, infant mortality was high. Doctors were unheard of in the cove, and babies were delivered by midwives, called grannywomen.

These days the old pioneers are all gone from Cades Cove, and the fertile valley is part of Great Smoky Mountains National Park. The Cove has been preserved to look much the way it looked in the 1800’s, and many of the homes, churches, and outbuildings remain as the largest open air museum in the entire Great Smoky Mountain National Park. Many of the original pioneer homesteads, barns, businesses, pastures and farmland remain much as they were when this was a bustling mountain community. 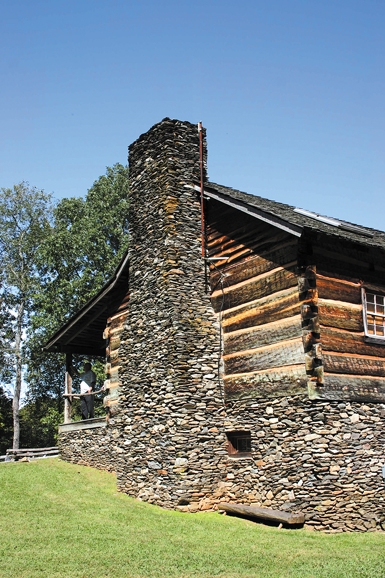 The abundant wildlife that drew the Cherokee here is still an important part of the region, and visitors frequently see deer, wild turkey, coyote, raccoons, skunk, and black bear. On our visit to the cove we saw wild turkey and deer, and we got caught up in a traffic jam as peopled stopped to watch a bear amble though the trees.

An 11-mile, one-way loop road with frequent pullouts circles the cove, offering motorists the opportunity to sightsee at a leisurely pace. Allow at least two to four hours to tour Cades Cove, and allow more time if you walk some of the area’s trails or stop for a picnic. The loop road is closed from sunset to sunrise.

Cades Cove offers the widest variety of historic buildings of any area of Great Smoky Mountains National Park. Scattered along the loop road are three churches, a working grist mill, barns, log houses, and many other faithfully restored eighteenth and nineteenth century structures. An inexpensive self-guided tour booklet available at the entrance to the road provides in-depth information about the cove’s buildings and the people who built them. 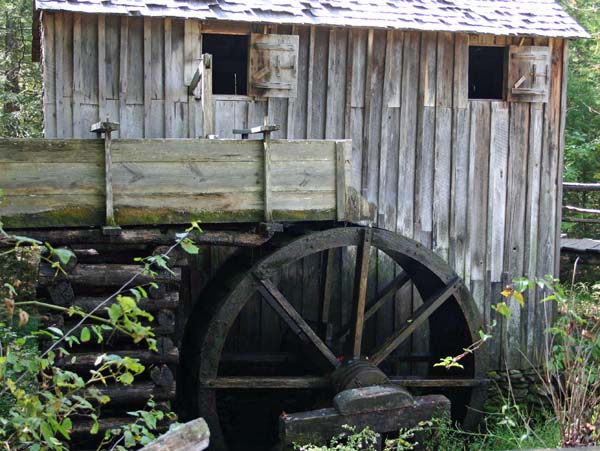 The loop rode can be congested on weekends and travel will be slow. Midweek is the best time to visit, when there are fewer visitors. The pioneer homes, churches, and outbuildings are mostly on the outside of the loop road, while the inside of the loop is pasture land and forest where the settlers grew their crops and harvested nature’s abundance.

Keep a watchful eye open as you navigate the loop rode, it’s easy to spot wildlife all along the loop. On our visit a whitetail deer ran right toward us across a meadow, veering to the side only when it was within a few yards of where we stood. 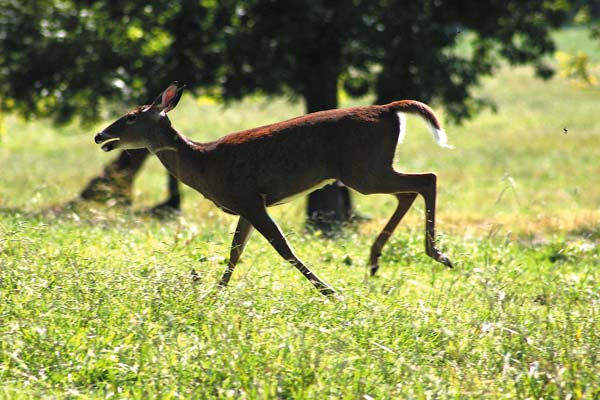 One of the most popular stops on the Cades Cove loop drive is Cable Mill, where the National Park Service has a Visitor Center that is open from mid-April through October. Here visitors can purchase post cards, souvenirs, and books about Cades Cove and Great Smoky Mountains National Park. The Visitor Center has restrooms, emergency assistance, and park rangers are on duty. Many original Cades Cove buildings have been restored and relocated here. 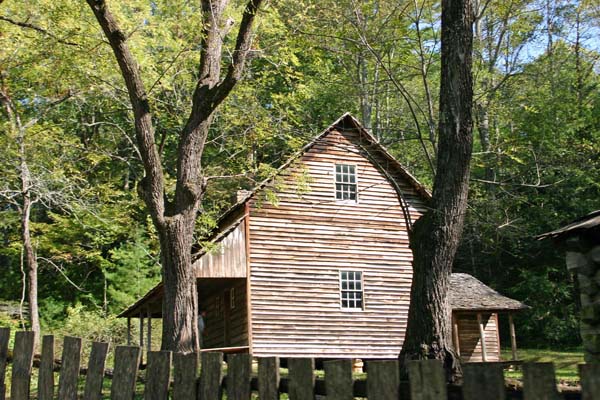 Many homes in the cove were not preserved, and their ruins are still visible if you look for them. You can recognize these abandoned home sites by remainders of their chimneys, rock fences, and landscaping which looks out of place to the surroundings.

A visit to Cades Cove is a great experience any time of year, but especially in the fall when the mountains are painted with color and the air is crisp and clear. On Wednesday and Saturday mornings from May through September, the Cades Cove Loop Road is closed to motor vehicles until 10 a.m., giving bicyclists, walkers, and concession-operated hay ride wagons an opportunity to explore the road in a relaxed atmosphere.

Spend a day exploring Cades Cove, and I guarantee you’ll return to this magical mountain valley.


Be sure to enter our latest Free Drawing. This week’s prize is an audiobook of Badge Bunny, the third book in my John Lee Quarrels mystery series. To enter, click on this Free Drawing link or the tab at the top of this page and enter your name (first and last) in the comments section at the bottom of that page (not this one). Only one entry per person per drawing please, and you must enter with your real name. To prevent spam or multiple entries, the names of cartoon or movie characters are not allowed. The winner will be drawn Sunday evening. 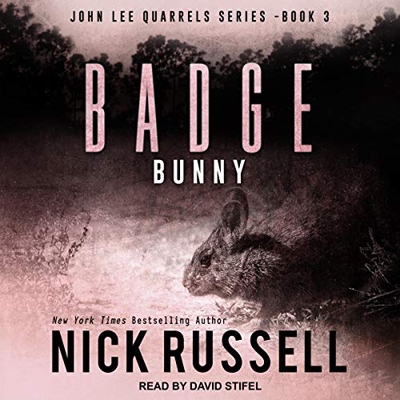 Thought For The Day – Givers have to learn to set limits, because takers have none.