Theirs was a love that could never be. A passion that had to be hidden from the cultural mores of the time. But even death could not deny them their devotion to each other. The proof lives on in a simple tombstone in Tampa’s Oaklawn Cemetery.

Virginia native William Ashley arrived in Tampa in 1837 and took a position as clerk at the Army trading post at Fort Brooke. He quickly immersed himself in the society of the growing settlement and was elected Clerk of the City in 1856, serving under Mayor John Jackson. Ashley Drive in downtown Tampa was named after him.

Ashley became one of Tampa’s most prominent citizens, participating in many of the town’s important civic and social affairs. He built a grand house, where he entertained all of the movers and shakers of the day.

By all accounts, Ashley, a bachelor, was quite a catch, and there is no doubt that the belles of Tampa society vied for his attention. But he politely avoided any commitments, to the distress of more than one lovely lady searching for a suitable husband.

You see, William Ashley was already in love.

Unfortunately it was a love that would never be allowed in the South during that period because William Ashley was white, and the woman who owned his heart was black. Not just black, but a slave

Little is known of Nancy Ashley’s early life. In U.S. Census slave inventories taken before and during the Civil War, Nancy is listed in Ashley’s household as a slave. Nancy was Ashley’s only slave, as far as Census records show, and like all slaves of her time, she took her master’s last name. However, their relation went much deeper than that of master and slave.

After Emancipation freed all slaves in America, Nancy remained in William Ashley’s house, but Census records list her occupation as “cook.” That in itself was not that uncommon. Not every slave owner was viewed as a demon, and many slaves chose to remain with the families they had served, rather than be cast loose into a society not yet ready to assimilate them.

During William and Nancy’s lives, in fact, into the middle of the 20th century, marriage between people of different races was illegal in many states, including Florida. And for a man in William Ashley’s position, it would have been both socially and financially disastrous. Surely some of William Ashley’s closest associates must have known of, or at least suspected their relationship, but it was never spoken of, and in the presence of others they carefully maintained the facade of servant and master.

Yet their love for each other was stronger than any obstacle the world they lived in could put in their path. William never married, and Nancy remained in his home all of their days.

After a long illness William Ashley died in 1871, at the age of 68. He bequeathed all of his worldly goods to his devoted companion, except for $99, which he left with his best friend, John Jackson, with instructions that after Nancy’s death, she be buried beside him, under a headstone with an inscription he had penned himself.

Nancy Ashley lived just a year longer than William, and many believe she died of a broken heart. Honoring his friend’s wishes, John Jackson, himself a prominent Tampa citizen had a tombstone erected with the epitaph “Here lies William Ashley and Nancy Ashley, Master and Servant. Faithful to each other in that relation in life, in death they are not separated. Stranger, consider and be wiser, in the grave all human distinction of race or caste mingle together in one common dust. To commemorate their fidelity to each other, this stone was erected by their Executor, John Jackson (1873).” 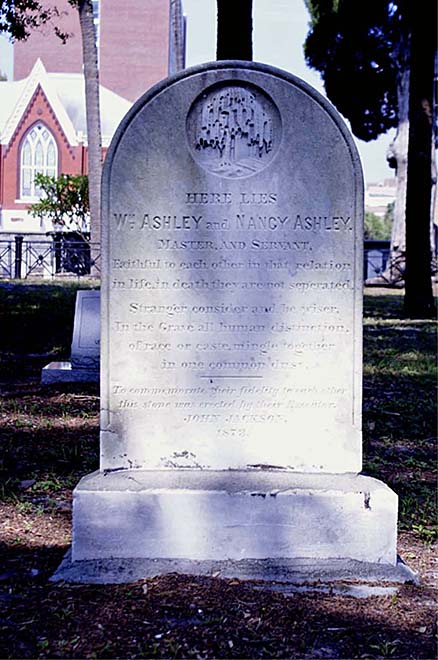 And there they remain today, together in death as they were in life, William and Nancy Ashley, two souls forever united.

Be sure to enter our latest Free Drawing. This week’s prize is an audiobook of my friend Ken Rossignol’s Pirate Trials: Famous Murderous Pirates. To enter, all you have to do is click on this Free Drawing link or the tab at the top of this page and enter your name in the comments section at the bottom of that page (not this one). Only one entry per person per drawing please, and you must enter with your real name. To prevent spam or multiple entries, the names of cartoon or movie characters are not allowed. The winner will be drawn Sunday evening.

Thought For The Day – Take risks. You are a lot better off being scared than being bored.

3 Responses to “A Tale Of Forbidden Love”