Sometimes I tease Miss Terry and tell her that the reason I have such terrible handwriting is because I spent so much time playing doctor as a curious youngster that they made me an honary member of the American Medical Association. But lately I’m beginning to feel like I might as well go to medical school with all the time I’ve been spending in doctor’s offices, emergency rooms, and hospitals.


We brought my cousin Beverly here from Tucson because she needed medical care that she wasn’t getting back there. She has a litany of medical issues ranging from severe rheumatoid arthritis to stage 3 kidney disease, and ever since we got her here we have been getting her set up with new doctors, going to initial appointments, and getting some of her problems taken care of. And, of course, Terry and I also have had some medical appointments of our own thrown in there too, just to keep things interesting.

Two weeks ago today, I took a friend to the ER at AdventHealth hospital in New Smyrna Beach because he was suffering severe abdominal pain. It was determined he was having issues with his gallbladder and they admitted him and kept him for a few days, then sent him home, saying that they needed the gallbladder to “cool down” before they did surgery. He was home three or four days and I had to take him back to the ER because the problems had gotten worse and the pain was intolerable. They re-admitted him, kept him overnight, and sent him home. He was home a couple of days and we went back for a third time. He’s still there, and hopefully they will actually do something instead of playing this revolving door routine.

I had heard from several people that the hospital in New Smyrna Beach is not a good place to be if you have health issues, and it’s become very apparent to me that they were right. The staff all seem friendly enough, but nothing ever gets done. For example, they scheduled a CAT scan the first day I took him to the ER and first said it would be in an hour or two, then later said it would be after he was in his room upstairs. It was actually a couple of days before they got around to doing it.

When they admitted him the first time around, it was over 24 hours before they allowed him any water or food. I kept asking why and they said they were waiting for tests to be done but had no idea when that would be. Finally, they gave him a little bit of water and ordered a food tray for him, which then sat at the nurses’ station for eight hours. I kept asking when they were going to feed him and finally the nurse said that the microwave on their floor was not working. I offered to buy them a new microwave if they would just feed the poor guy. Finally somebody took the tray up to another floor, warmed it up, and brought it to him. Again. after sitting on the counter for at least eight hours.

Also, there is no hot water in the bathrooms on any floor on that wing of the hospital. What? If there’s no hot water, how do they adequately wash their hands? And can you imagine being a patient in the hospital and having to take a cold shower? I told Terry I don’t care whatever happens to me, take me to one of the hospitals in Port Orange, Daytona Beach, or Titusville. Or even to a veterinarian. I’d even settle for a Boy Scout with a First Aid merit badge. Anyplace but AdventHealth in New Smyrna Beach.


One of Beverly’s problems is an excess of fluid surrounding her brain. This causes all kinds of problems, including the balance issues that have resulted in three serious falls in the months before we went to Tucson to get her, headaches, vision problems, and other issues. We were up at 4 AM yesterday morning to have her at Halifax Hospital in Daytona Beach by 6 AM for surgery to insert a shunt into her skull, which is then routed through her body to her abdomen to drain off the excess fluid. I know that sounds pretty gruesome, but aside from getting up so early in the morning, the worst part was the two hours that a team of nurses and specialists spent trying to access a vein so they could start an IV. Beverly’s veins are very hardened and covered with scar tissue from years of medical treatments and infusions for her arthritis, and they just could not get it. They were trying so hard, even bringing in an ultrasound to try to locate a vein they could get into, and it just wasn’t happening. At one point both Beverly and one of the nurses were crying. They finally decided to put her under and then deal with getting into a vein.

Her surgery was scheduled for 8 AM but it was actually 9:30 before they ever took her in for it because of the delay. She was out of surgery in a little over 90 minutes, then in recovery for a while before they moved her to a regular room. Terry and I left somewhere around 5:30 PM, and at that point she was awake and alert, and said she was not in too much discomfort. Here she is modeling the latest fashion in ladies’ headwear. Do you think it will catch on? 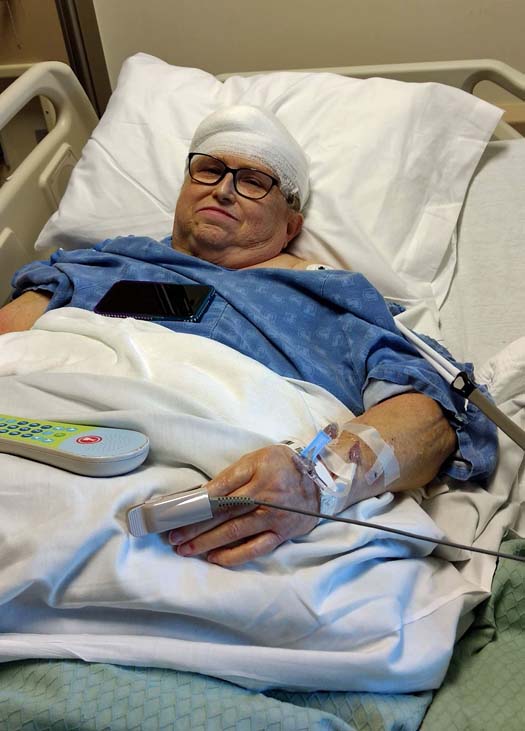 They tell us that if everything goes according to schedule, we should be able to bring her home this afternoon.

And I have to say that the difference between AdventHealth and Halifax is comparable to sleeping in your car or staying in an upscale hotel. Everything about Halifax impressed us, from the newer, more modern facilities that even have hot water, to the staff and doctors. It’s 50 minutes away from our house as opposed to 15, but well worth the drive.

Thought For The Day – People hate the truth. Luckily, the truth doesn’t care.