Navy ships are about as common a sight as Starbucks coffee shops in Bremerton, Washington, thanks to the Puget Sound Naval Shipyard. On one of our visits there were three or four old aircraft carriers and a few other vessels painted Navy gray. But one ship, the USS Turner Joy, has a special place in American history. Some have said that this ship and her sister destroyer, the USS Maddox, started the Vietnam War.


The USS Turner Joy (DD-951), a Forrest Sherman class destroyer, was built in Seattle and launched on May 5, 1958. The 418 foot long destroyer was armed with three 5-inch guns, machine guns, and two torpedo launchers that carried six Mark 46 torpedoes each. Her crew consisted of 17 officers and 275 enlisted men. 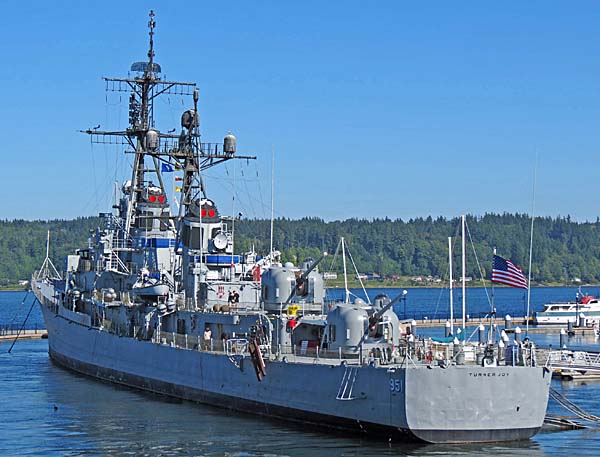 Until she was decommissioned on November 22, 1982, she served with distinction, earning a total of nine battle stars. Her duties included numerous combat tours off the coast of Vietnam, air-sea rescue duty near the Marianas Islands, as a radar picket ship, and as security for President Eisenhower’s visit to Asian nations. But the Turner Joy is most remembered for her participation in the Gulf of Tonkin Incident, which escalated our involvement in the Vietnam War.

In August, 1964, the ship was in her third deployment in the Gulf of Tonkin off the coast of Vietnam, making what were called “watch dog” patrols. On August 2, the USS Maddox, patrolling nearby, was attacked by three North Vietnamese motor torpedo boats from the 135th Torpedo Squadron. With the aid of fighters from the carrier USS Ticonderoga, the Maddox destroyed two of the enemy vessels and drove the third one away. The Turner Joy sped to the scene and remained with the Maddox as they continued patrolling.

Two days later, on August 4, the Turner Joy reported several images appearing on her radar that were believed to be enemy torpedo boats approaching at high speed. Both destroyers began firing at the suspected targets, and fighters from the Ticonderoga responded as well. Though the Turner Joy reported taking evasive action to avoid two torpedo wakes, no enemy boats were physically sighted and many believe that the blips on her radar were false images caused by the bad weather the ships were operating in. Ghost radar images are well known in the area.

Whether or not the second attack actually happened or was just a reaction by nervous crewmen on the Turner Joy, the incident led to Congress passing the Tonkin Gulf Resolution, which paved the way for America’s direct involvement in the Vietnam War. The Turner Joy was an active participant in the war, making several deployments into the war zone to interdict enemy shipping in Operation Sea Dragon and provide support to ground troops.

The ship and her crew paid a price for their role. In October, 1964, the Turner Joy fired 700 rounds at shore targets near Chu Lai, destroying 57 enemy structures before a shell hung up in one of her five inch guns. While crewmembers were trying to clear the muzzle the shell exploded, killing three sailors and injuring three others.

In April, 1967, the ship was attacking enemy boats beached near Cap Mui Ron when fire from a shore battery scored a direct hit on her fantail. The shell penetrated to the supply office below. One crewman was injured from shrapnel, and an air burst damaged the ship’s radar system. The damage was not enough to put her out of commission and the Turner Joy remained on post until relieved by another ship.

The Turner Joy completed her last combat deployment off the coast of Vietnam in September, 1968. After refitting, she made several peacetime deployments until 1976 when her years of faithful service took their toll and she was retired and finally decommissioned in 1982.


While some Forrest Sherman class destroyers were refitted as guided missile ships and others were scrapped, the Turner Joy would have a different fate. Donated to the Bremerton Historic Ships Association on April 10, 1991, the proud old destroyer now serves as a museum ship on Bremerton’s waterfront. She has been restored to her appearance during her active years during and after the Vietnam War, and today visitors can tour the old warship and get a feel for what sea duty was like during that troubled time in our history.

The Turner Joy is located on the Bremerton Boardwalk, an easy walk from the Seattle Ferry Terminal and the Harborside Convention Center. Streets are narrow in downtown Bremerton, and not suited for large RVs, so you should park your rig at one of the area campgrounds and drive your tow vehicle or dinghy when you visit.

The Turner Joy is open for tours daily from 10 a.m. to 5 p.m. during the spring, fall, and summer months, with shorter hours during the winter. There is also a Haunted Ship tour the last week of October. Plan on about 90 minutes to tour the entire ship. Because a tour of the ship involves climbing up and down ladders and navigating through raised hatchways, access below decks would be difficult for visitors with handicaps. She is handicapped accessible on and in part of her main deck. Wheelchairs are available upon request.

It’s Thursday, so it’s time for a new Free Drawing. This week’s prize is a Kindle Fire 7 Tablet with Alexa, a 7″ display, and 8 GB of memory. To enter, click on this Free Drawing link or the tab at the top of this page and enter your name (first and last) in the comments section at the bottom of that page (not this one). Only one entry per person per drawing please, and you must enter with your real name. To prevent spam or multiple entries, the names of cartoon or movie characters are not allowed. The winner will be drawn Sunday evening. 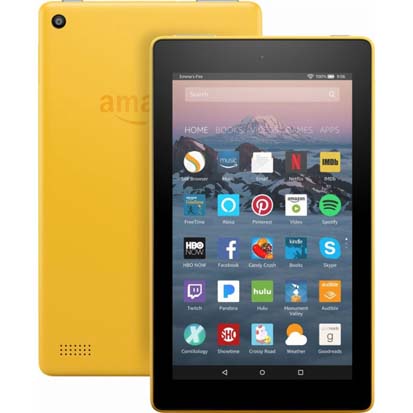 Thought For The Day – I need a new friend. The last one escaped.