Kansas City, Missouri’s historic Union Station is a treasure that the citizens of the Paris of the Plains cherish for its place in history as well as its place today as the city’s centerpiece for cultural and entertainment activities. 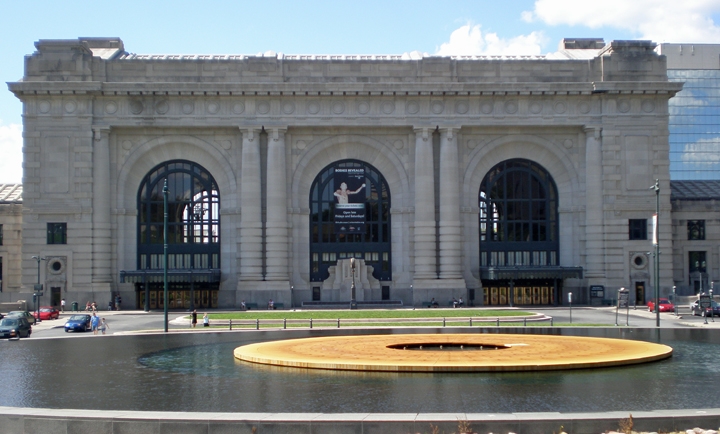 The old railroad depot has seen it all; farm kids coming to the big city for adventure and in search of a future, farmers blown out of the Dust Bowl, soldiers and sailors going off to war and returning home again, entertainers and gangsters, and an endless line of passengers arriving from someplace worse or departing for someplace better.


The city fathers were already exploring sites for a railroad station to replace their aging facility when a major flood in 1903 destroyed the aging Union Depot. Architect Jarvis Hunt was commissioned to design the new station, and construction began in 1911, at a cost of $6 million dollars.

When Union Station held its Grand Opening on October 30, 1914, the beautiful structure was the third largest train station in the country, with 850,000 square feet and over 900 rooms. The main waiting room could hold 10,000 people. City leaders boasted that it would last at least 200 years. The first train to arrive at Union Station was the Missouri-Kansas-Texas Flyer, which pulled in just after midnight on November 1. 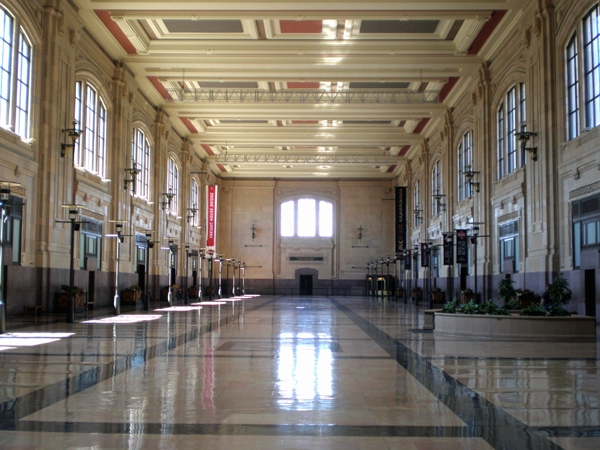 Jarvis Hunt’s design for the station included facilities to provide for every need a traveler could have. Union Station boasted ticket offices and a marvelously ornate huge main lobby, along with shops, a cigar store, newsstands, a drug store, restaurants, Kansas City’s largest barbershop, a post office, even emergency medical facilities and a small hospital. The entire complex was illuminated, heated, and cooled by its own power plant.

Union Station quickly became the city’s centerpiece for travelers and residents alike. “Meet me under the clock” was a popular saying between businessmen, lovers, and anyone else who wanted to arrange a meeting place under the depot’s focal point, the large clock that hung from the ceiling between the lobby and waiting room.

Union Station was a work of art as much as a working railroad depot. The interior’s marble walls, in a warm rose-brown color, were topped with beautifully ornate ceiling panels lit by beautiful chandeliers.
Rail traffic peaked during World War I, with 79,368 trains passing through Union Station, including an incredible 271 trains in one day! The city prospered along with the rail station. 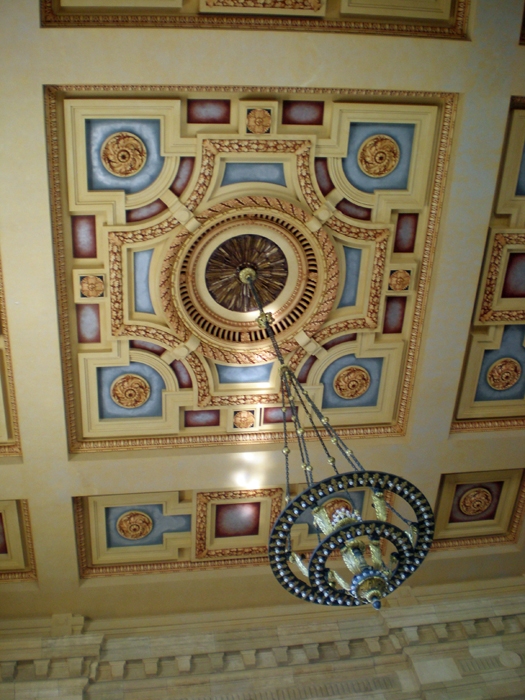 Things were always busy at Union Station, but they became downright frantic on June 17, 1933. On that day, a squad of police officers and FBI agents were escorting mobster Frank Nash to the Federal Penitentiary at Leavenworth, from which he had escaped almost three years earlier.

As the lawmen and their prisoner entered an automobile at the station, they were ambushed by three men armed with Thompson submachine guns. The gunmen were later identified as Charles “Pretty Boy” Floyd, Vernon Miller, and Adam Richetti, all well known gangsters. When the gun smoke cleared away, four lawmen were dead, as well as Frank Nash, whom the ambush was supposed to free. 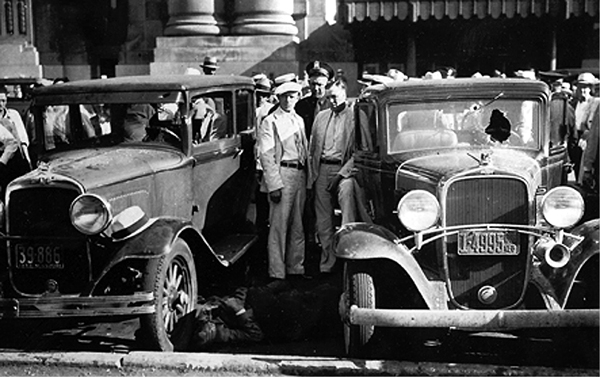 In the 1950s, rail travel began to decline as airlines came to the forefront, and over time Union Station had outlived its usefulness and began to fall into disrepair. Union Station closed in the 1980s and sat empty and neglected. Several times over the years it was scheduled for demolition, but every time preservationists were able to save it from the wrecking ball.

In 1996 a bi-state tax initiative was approved to fund restoration of the historic depot, and construction began in 1997 with a massive cleaning, inside and out. By the time that project was over, more than 10 million pounds of debris was removed. The renovation was completed in 1999.


Today Union Station is once again bustling with activity. It is a popular destination for local folks to stop for lunch in one of several restaurants, to mail a letter from the post office, or to browse the shops inside the depot. Tourists from around the globe also come here to visit the historic railway depot and to admire its beautiful architecture.

Union Station is also home to an interactive science center called Science City, and a performance hall featuring giant-screen movies and live theater, as well as the KC Rail Experience, a permanent exhibit honoring the exciting history of our nation’s railroads.

Today visitors come to attend events on the station’s stages, to experience the Gottlieb Planetarium, to enjoy a huge model train layout in the lobby, or to see the fine old rail cars on display outside the station. Here they can shop for unique gifts, watch sporting events on one of the many huge screens, or yes, even catch a train. Union Station is still a busy Amtrak stop. 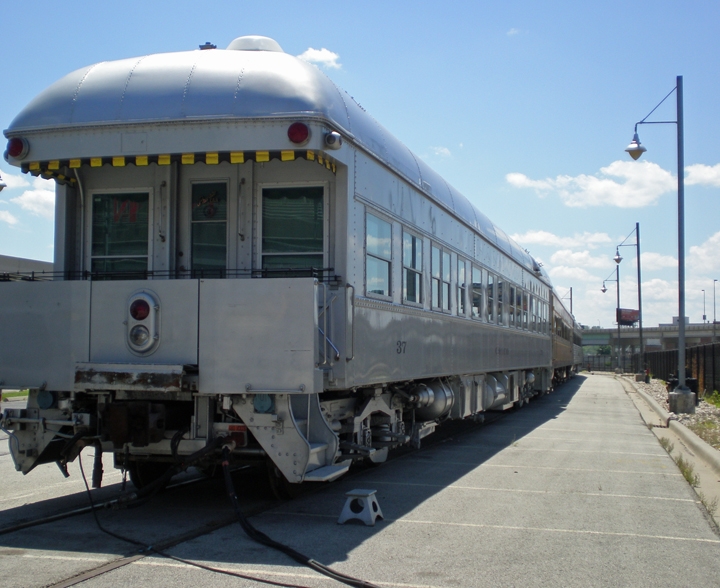 Railroad fans will enjoy the overhead walkway, from which they can get a bird’s eye view of passengers loading onto rail cars, or to see freight trains rolling through town. During our visit we saw several long coal trains heading east. 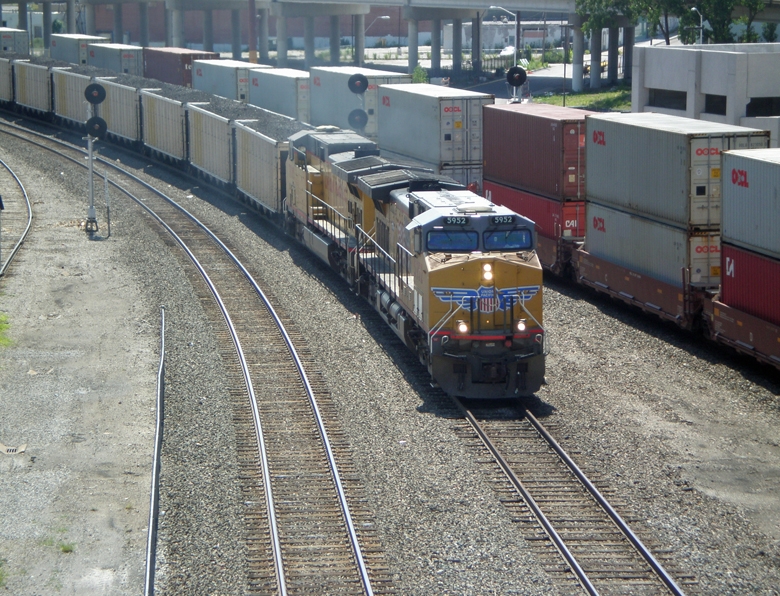 The Union Station building is open from 6 a.m. to midnight daily. Attractions inside the station, such as the KC Rail Experience, Science City, and special exhibits, operate on their own schedules.

Union Station has ample parking for automobiles, but it is located in downtown Kansas City, and access and parking for RVs would be very difficult. You should park your rig at an RV park outside the metropolitan area and drive your dinghy or tow car to the depot.

Thought For The Day – I want to be 16 again and ruin my life differently. I have new ideas.