Note: This story is from my book Overlooked Arizona.

I have a tremendous amount of respect for firefighters, but it is a job I could never do. The very idea of being in a fire terrifies me. Maybe this is just a natural human reaction, or maybe it’s because I had a cousin who was horribly burned when she was a child. For whatever reason, firefighting is one job I never considered, and never would. But I do appreciate the brave men and women who do it.


We toured the Hall of Flame Museum of Firefighting in Phoenix, and to say we were impressed would be a gross understatement. Located near the Phoenix Zoo and Phoenix Municipal Stadium, the museum displays over 130 restored wheeled pieces of firefighting equipment dating from 1725 to 1969. 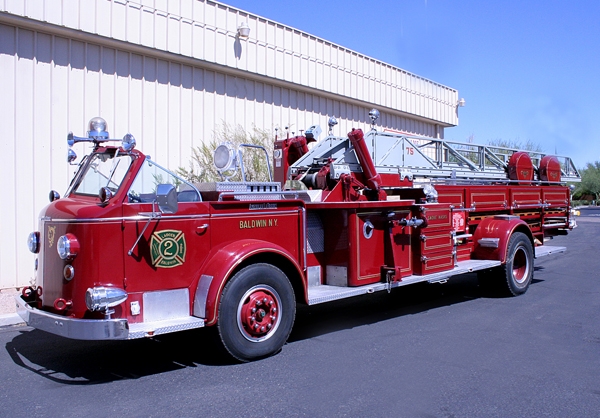 We saw everything from hand pulled pumpers that required as many as 50 firemen to work the wooden handles that pumped water onto fires, to elaborately decorated “parade” carriages that were used both to fight fires and to promote the fire department at community events, such as a 1924 American La France fire engine that saw service in San Bernardino, California. Every item on display is in immaculate condition.

The oldest unit on display is a 1730 Newsham hand pumper made in England. Supplied by water from a bucket brigade, the Newsham could pump about 20 gallons per minute, which is about the output of a pair of typical modern day garden hoses. 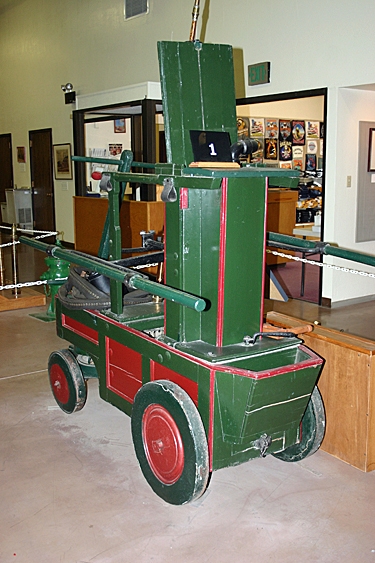 Most English estates had their own fire brigades, which also fought fires in the villages, and one of the older pieces on display is an 1838 Merryweather hand pumper that was built for the Earl of Harrington’s estate in Devonshire. 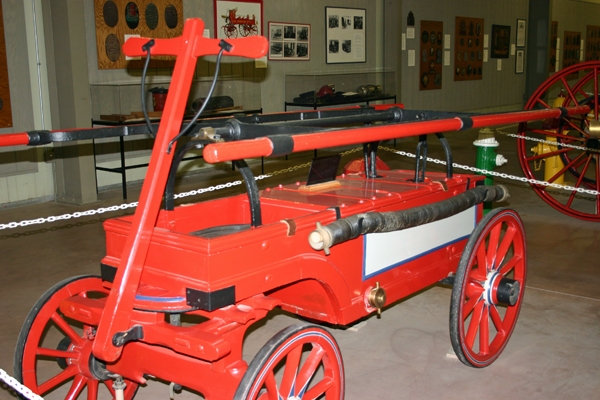 In the mid-1800s, American volunteer fire companies took great pride in their equipment, and many purchased elaborate “parade carriages” to represent their company in parades and musters. The museum’s beautiful 1870 Buckley & Merritt hand drawn parade carriage is typical of that class of unit. It was built on special order for the firemen of the Hotchkiss Hose Company in Derby, Connecticut. 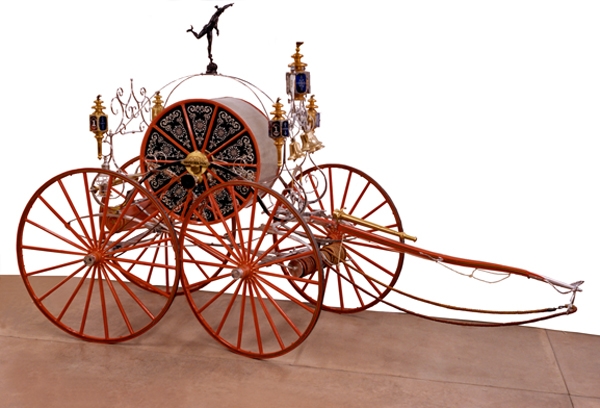 By the 1890s, steam powered fire pumpers had replaced hand pumpers, and were capable of putting a lot more water on a fire in a shorter period of time than their predecessors. The museum has several nice steam powered units on display, including an 1890 Shand Mason, which was used in Rugby, England. It was rated at 450 gallons per minute. A crew of firemen sat on wooded ledges above the hoses on the side of the pumper, which was horse drawn.

Besides heavy equipment, the Hall of Flame Museum has an impressive display of thousands of items, including firefighter’s helmets and other artifacts, communication equipment from over the years, and hundreds of uniform shoulder patches from fire departments around the world.


Several mannequins are dressed in firefighter gear from decades past and modern time, to demonstrate the advances in fire science. 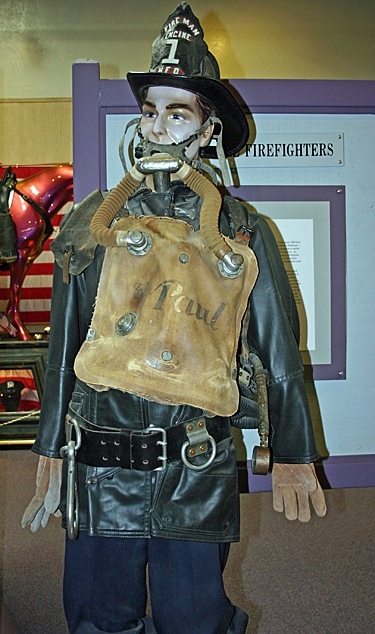 One touching display is the 9/11 Memorial Pony that Santa Fe, New Mexico artist Rod Barker created to honor the firefighters and policemen who died in the collapse of the World Trade Center. The sculpture is a saddled riderless horse with a pair of boots turned backwards in the stirrups to signify those who lost their lives. 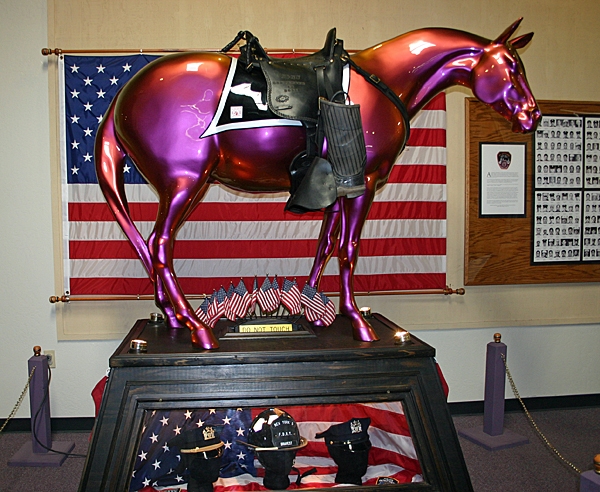 Motorized fire engines in the museum’s collection include a 1950 Autocar that served the community of Ardmore, Pennsylvania for years, and dozens of other impressive pumpers and ladder trucks. 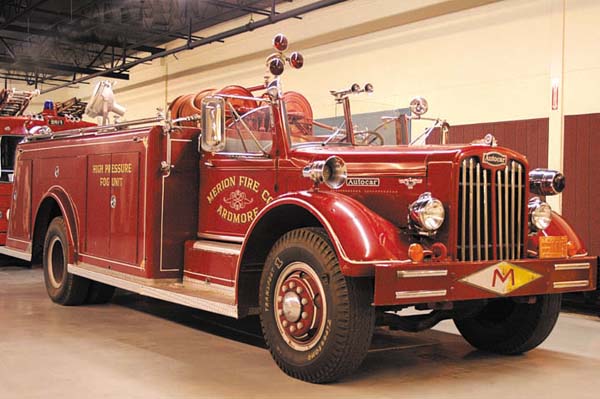 We got a chuckle out of the tiny 1909 Brush Model D Chief’s Buggy, an underpowered one cylinder car used by the Fire Chief of Owensville, Indiana. The chief was humiliated when a boy on a bicycle beat him to the scene of a fire and demanded a new vehicle! 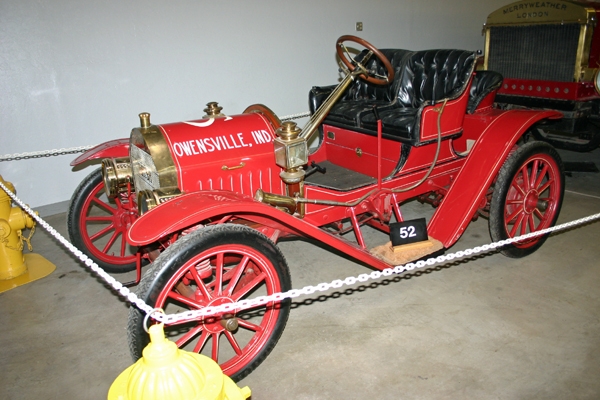 The museum also has a hands-on area, where children can dress in firefighters’ equipment and can tour a Safe House and learn how to protect themselves and their home from fire.

We spent the entire afternoon at the museum, enthralled by all of the displays. The exhibit area covers 35,000 square feet, divided into six galleries. There is also a research library with over 6,000 items. The museum has a small gift shop, with firefighting souvenirs available for sale, and the friendly staff is happy to answer any questions you may have.

The museum’s parking lot would accommodate a large RV with a bit of maneuvering, if it wasn’t too busy, and the staff said they will open a gate on an extra driveway to make it easier to get in and out with a large vehicle. Personally, I’d prefer to leave my rig at one of the many RV parks in the Phoenix and Mesa area, and drive my tow vehicle.
For more information about the Hall of Flame Museum of Firefighting, call (602) 275-3473, or visit their website at www.hallofflame.org. 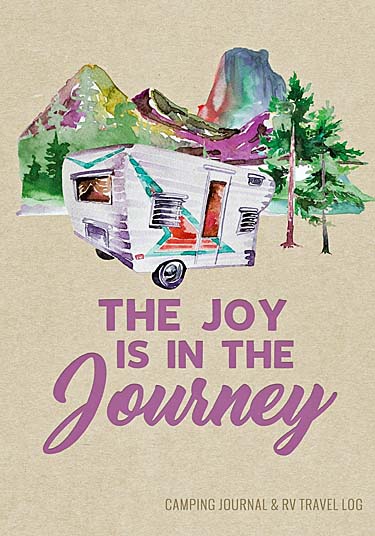 Thought For The Day – Stop digging in the past. There is no treasure there to be discovered.