In the small town of Salem, Illinois, located at the junction of U.S. Highway 50 and Interstate 57, we learned about one of America’s greatest political figures from a century ago.

Born in Salem on March 19, 1860, William Jennings Bryan went on to become an attorney, newspaper editor, congressman, and influential public speaker. He was known as “The Great Commoner” and “The Silver-Tongued Orator” and ran for president of the United States in a then-unprecedented three campaigns.


Bryan spent the first years of his life living in Salem, where he attended Salem public schools. Bryan’s first ambition was to become a minister, but he eventually decided to follow in his father’s footsteps and become a lawyer. He left Salem to study law at the age of 15 and never lived there permanently again, though he often visited his hometown during his busy career.

After leaving Salem, Bryan lived in Jacksonville, Illinois, then moved to Nebraska, becoming editor-in-chief of the Omaha World newspaper. He published a weekly sixteen page newspaper called the Commoner, with a circulation of 285,000 for 23 years. He also wrote fifteen books, edited two collections of orations, and produced dozens of pamphlets. In 1922, his first radio address is estimated to have had an audience of sixty million listeners. His controversial views gained him both many supporters and many critics.

Bryan entered politics and was elected to Congress as the U.S. Representative from Nebraska, in which capacity he served from 1891 to 1895. While in Congress, Bryan supported many important pieces of legislation, including Prohibition (which made the buying and selling of alcohol illegal), women’s suffrage, and an amendment to the Constitution preventing schools from teaching evolution (the theory that man developed, over millions of years, from apes). This last topic would later lead to William Jennings Bryan’s most important public appearance. But Bryan had loftier goals.

Before attending the 1896 Chicago Democratic Party convention, Bryan visited Salem, where he told a friend that he felt that he could receive the Democratic party’s nomination if he could obtain the opportunity to speak to the delegates. His prediction proved most accurate.

Bryan delivered a speech accusing the nation’s wealthy business and political leaders of supporting the gold standard for paper money, at the expense of the average worker. “You shall not press down upon the brow of labor this crown of thorns, you shall not crucify mankind upon a cross of gold,” he said.

The “Cross of Gold” speech received more applause than had been given any other speaker at the convention. Even those defending the gold standard applauded Bryan. His words made Bryan famous nationwide and won him the Democratic party’s nomination, just as he had predicted. But the Chicago speech probably was the high point of Bryan’s political career. Although he won the presidential nomination that year, again in 1900, and a third time in 1908, Bryan never succeeded in being elected President of the United States.

Bryan served as Secretary of State under Woodrow Wilson, but he resigned in 1915 as World War I approached because he opposed Wilson’s foreign policies, which he believed would draw America into a war against Germany. Like his earlier prediction about the 1896 Democratic convention, this too proved accurate.

William Jennings Bryan held deep religious beliefs, and those beliefs influenced everything he did. He crusaded against Darwin’s theory of evolution, that mankind evolved from apes, being taught in public schools. In 1924, the state of Tennessee passed the Butler bill, which made it unlawful for any teacher in a public school to teach any theory that denied the story of the Divine Creation of man as taught in the Bible or teach instead man descended from a lower order of animals.

The new law was tested in court when Dayton, Tennessee school teacher John T. Scopes was charged with teaching the theory of evolution in a high school biology class. Famed attorney Clarence Darrow represented Scopes, while William Jennings Bryan prosecuted the case, which was tried in July, 1925. The issues of the case were controversial and complicated; the academic freedom of teachers vs. that of students, free speech vs. parental rights, governmental authority vs. individual rights, separation of church and state, and the roles of religion and science.

The trial was the media sensation of its time, covered in print and on the radio worldwide. Bryan’s dramatic arguments won him a conviction, and John Scopes was fined $100. William Jennings Bryan was a good man and liked Scopes as a person. He even offered to pay Scopes’ fine if he needed the money. The Tennessee Supreme Court later reversed Scopes’ conviction on a legal technicality. The trial was the topic of the dramatically inflated stage play and movie Inherit the Wind.


On July 26, 1925, five days after the close of the Scopes Monkey Trial, William Jennings Bryan died quietly in his sleep. News of his death triggered an outpouring of grief from the “common” Americans who felt they had lost their greatest champion. A special train carried him to his final resting place in Arlington National Cemetery. Thousands lined the tracks to bid a tearful farewell to the beloved orator.

His boyhood home at 408 S. Broadway in Salem has been preserved and is a museum filled with memorabilia of Bryan, his politics, and the turn-of-the-century era in which he lived. The home is located next door to the building that once housed the Bryan Bennett Library, which he helped found. 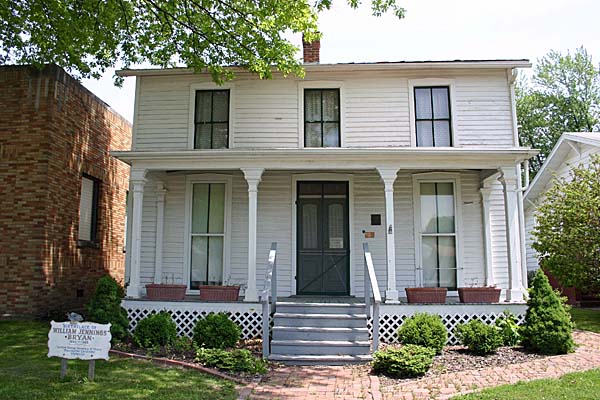 A statue of William Jennings Bryan stands in a park on Broadway (State Route 37) a few bocks north of his boyhood home. The statue was created by Gutzon Borglum, the famed sculptor of Mount Rushmore. It originally stood in Washington, D.C., where it was dedicated by President Theodore Roosevelt on May 3, 1934. In 1961, it was moved to its present location in Salem. 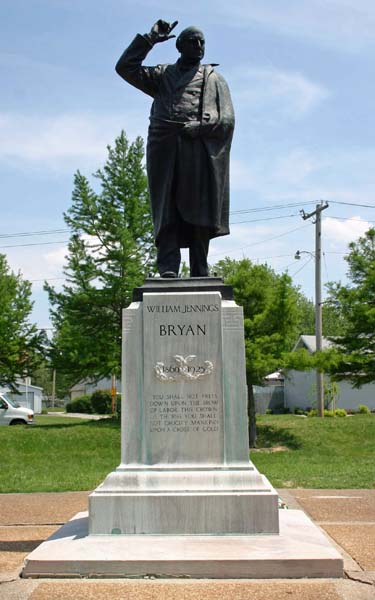 Thought For The Day – Sometimes the questions are complicated, but the answers are simple.