Nick's Blog » Why Is That Eskimo In My Yard?

Welcome to Florida, where you can experience spring, summer, fall, and winter all in the same week. Sometimes even in the same day! The temperatures have been in the mid to upper 80s for quite a while now, which is too warm for this time of year. Then they suddenly took a nosedive, and we had frost last night, with more predicted again tonight. With the windchill, some parts of Central Florida were in the low 30s and a few places even in the 20s. That’s enough of that nonsense! But the good news it’s supposed to start warming up again by the weekend.


Several people have asked me when the printed edition of Big Lake Wedding would be out, and I thought it would be by now. Unfortunately, the folks at Amazon had other ideas. I submitted the manuscript and cover for the printed edition and it never went live. Yesterday I contacted Amazon, and they said the file was corrupted and to try again. I uploaded it a second time and got an error message. The message didn’t say what the error was, just that there was an error in the cover files. It can be very hard to talk to the folks at the publishing part of Amazon, and a series of emails back and forth didn’t accomplish anything.

About the same time, I realized that they had never changed the updated print covers from the first four books in the Big Lake series to the new ones that my cover artist, Elizabeth Mackey, created for me a while back. In doing some poking around, I found that they had the same error message. Someone who has dealt with Amazon more than I have suggested I just upload the cover files again, and this time they went through with no problem, even though I didn’t change anything with them. Go figure.

I tried resubmitting the files for the Big Lake Wedding cover and got the same error message, so I had Elizabeth tweak it a little bit. I will re-upload it again this morning and see what happens. Elizabeth has made a lot of covers for me and for other authors I know, and there was never a problem with Create Space, which was the print division of Amazon before it was all rolled into Kindle Direct Publishing (KDP). Now a lot of authors are having issues like this. I guess they should have listened to that old axiom “if it ain’t broke, don’t fix it.”

In other book news, yesterday I took part in a non-credit seminar on self-publishing for a community college adult education program. I am always surprised at how many “artists” there are out there who have been working on the same book for two or three years and want to argue with a successful author and tell him how he is doing it all wrong and selling out for the money. There seems to be at least one in every group I speak to. I told the clown this morning that I’m not an artist and have never claimed to be one. I’m a whore, I do it for the money.


Long time Gypsy Journal subscribers and blog readers Ron and Susan Wilson, who attended a couple of our Gypsy Journal rallies back in the day, contacted me to say that they were in the area and invited us to dinner. Never one to miss the opportunity to connect with old friends, or to turn down a free meal, I was quick to accept. We got together at the Sea Shack in New Smyrna Beach yesterday afternoon and had a nice visit. Ron and Susan are an interesting couple with a lot of great stories to tell about their RV travels and all the things they have seen and done, including geocaching and visiting all 50 state capitals. Here’s a picture of our dinner group with Beverly on the left, then Miss Terry, myself, Sue, and Ron. 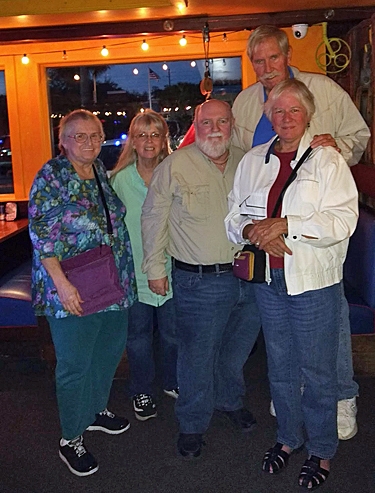 They also told us to be sure to watch Jeopardy next Monday, March 11, because their daughter is going to be one of the contestants. Susan said she will be easy to spot, she’s the girl with a bright pink hair. I will definitely be tuning in to watch that!

Thanks for dinner and for making time for us Ron and Sue, we really enjoyed ourselves.

Thought For The Day – What counts in making a happy marriage is not so much how compatible you are, but how you deal with incompatibility.

6 Responses to “Why Is That Eskimo In My Yard?”