Nick's Blog » Gators And Birds And Rockets, Too!

In yesterday’s blog I said that my cousin Beverly had never seen an alligator in the wild. She’s only lived in two other states in her life, Ohio and Arizona, neither of which are prime gator habitat. But this is Florida, baby, and any body of water bigger than a birdbath probably has an alligator or two in it!


Yesterday we took her to the Merritt Island National Wildlife Refuge, our go to place when we want to introduce visitors from out of state to some of our local critters. It was a beautiful day, with temperatures in the mid-80s, so we knew that we wouldn’t see as many alligators as we have other times. Most of them would probably be in the water trying to keep cool. But we’ve never been there yet when we’ve gotten totally skunked.

And sure enough, within a quarter-mile or so of turning onto the Black Point Wildlife Drive we spotted this little guy. As gators go, he wasn’t all that impressive, but I still would not want to find him hanging out in my yard. 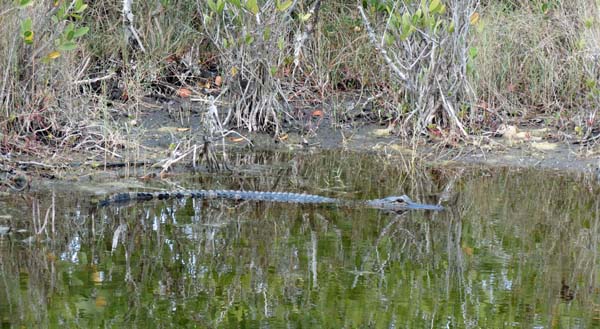 It wasn’t long before we found another smaller gator, also in the water. I told Beverly we would probably see some that were a lot bigger than that before we were done. 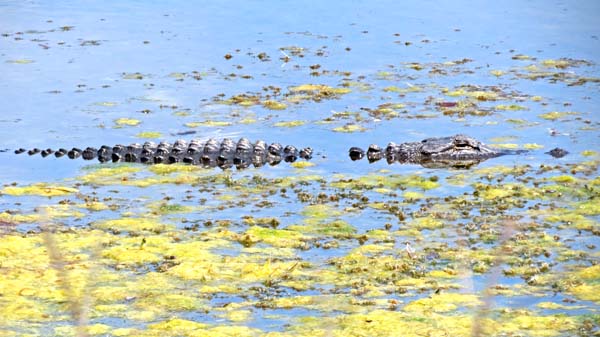 And we did! Now that’s a respectable alligator! 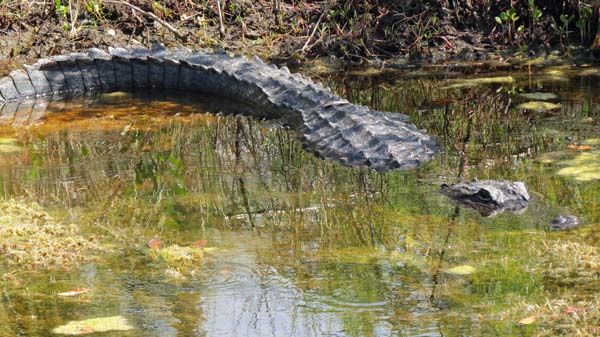 This is another big one, but kind of camera shy and not willing to show its face. 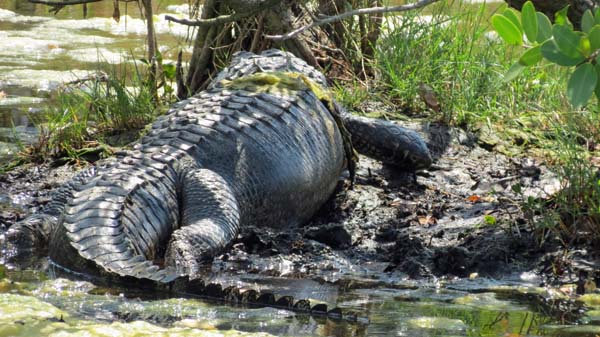 Now this fellow, on the other hand, didn’t hesitate to give us the evil eye. I’ve got to admit, there’s kind of a thrill in seeing an animal in the wild that will kill you if you get too close. Not that we were going to do anything stupid like that! We stayed inside the Explorer where we belonged. 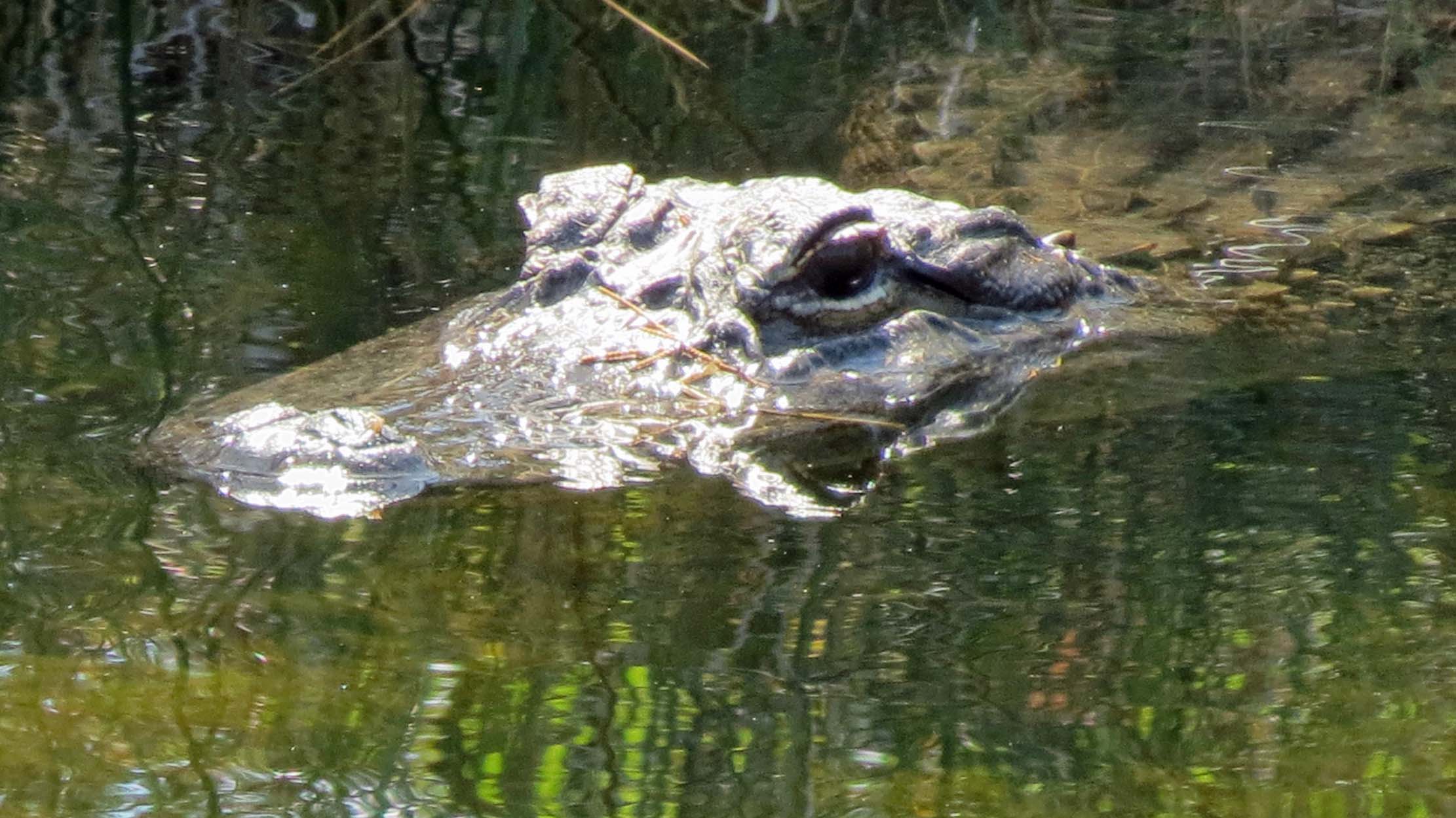 Here’s another big one. I wonder if this is the alligator equivalent of a mug shot? 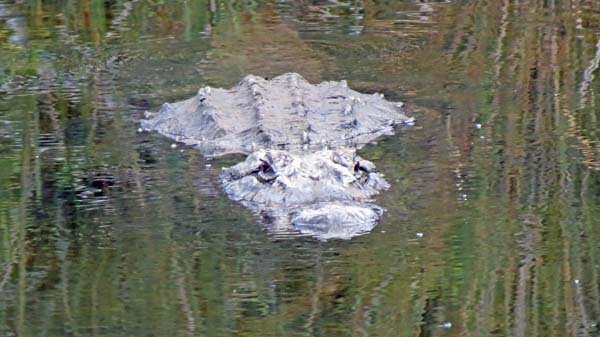 The Wildlife Refuge is home to all kinds of animals, not just alligators. There are plenty of snakes, along with foxes, bobcats, turtles, and armadillos. And birds. Lots and lots of birds.

This handsome fellow had no problem posing for a picture. 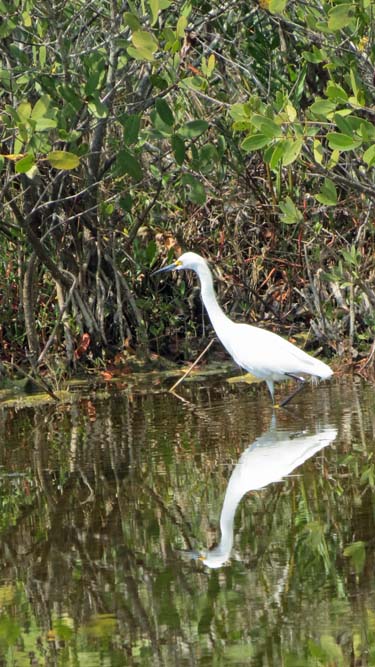 I guess if it’s Friday night at the Wildlife Refuge, one has to do a bit of preening to get ready for the evening’s activities. 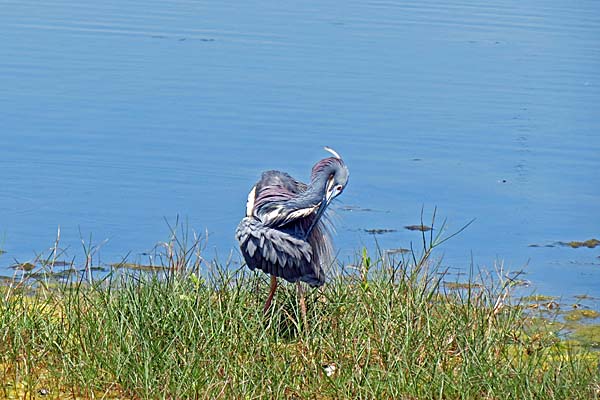 We have seen a lot of Brown Pelicans here but these American White Pelicans are harder to spot. Among the largest birds in North America, they have a 9-foot wingspan and are similar to their cousins, Brown Pelicans, in shape, but are much larger. They are usually found inland feeding in shallow lakes and do not dive from the air to catch fish like Brown Pelicans do. 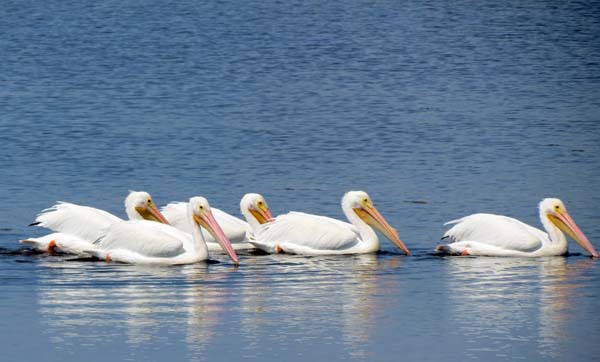 We knew there was a rocket launch scheduled for yesterday afternoon and someone told me it would be about 4 o’clock. When we left the Wildlife Refuge we drove through Titusville looking for a good place to pull over and watch the action. Then we discovered that the launch window didn’t even open until almost 7 PM, and we didn’t feel like hanging around for close to three more hours to watch it.

As we were heading out of town we stopped at the new location for Kayaks By Bo, where we bought our Old Town Predator kayaks in December of 2017. They were right downtown but have moved to a very nice building right on the water. This is a great family run business and they have always treated us very well. Tom, the father, told me they are going to be installing a kayak launch ramp to make it easy for customers to take a test paddle right there before purchasing a boat. When we were kayak shopping they took us to the water and let us paddle several different models until we found the ones that were just right for us.

Tom also told me they are going to start having bioluminescence paddling tours in the upcoming weeks. That’s very high on our bucket list and I told him that we definitely want to take one. From the videos I’ve seen of them, it’s almost a magical experience.


Back at home, it turned out that it was good that we didn’t wait for the rocket launch because there were a long series of delays and it looked like it would be scrubbed. But finally, sometime around 9 PM, they got it off the ground. The rocket was carrying an Air Force GPS satellite and Terry and I went out in our yard in time to see it heading for outer space. I’ve never really been into rockets and things like that, and I’ve never watched even one of the Star Wars or Star Trek type movies and TV shows, but it is always a thrill to see a rocket lifting off.

Be sure to enter our new Free Drawing. This week’s prize is an audiobook of Chesapeake 1880 by my friend Ken Rossignol, a tale of life in the Chesapeake Bay region as the industrial revolution changed the world forever. To enter, all you have to do is click on this Free Drawing link or the tab at the top of this page and enter your name (first and last) in the comments section at the bottom of that page (not this one). Only one entry per person per drawing please, and you must enter with your real name. To prevent spam or multiple entries, the names of cartoon or movie characters are not allowed. The winner will be drawn Sunday evening. 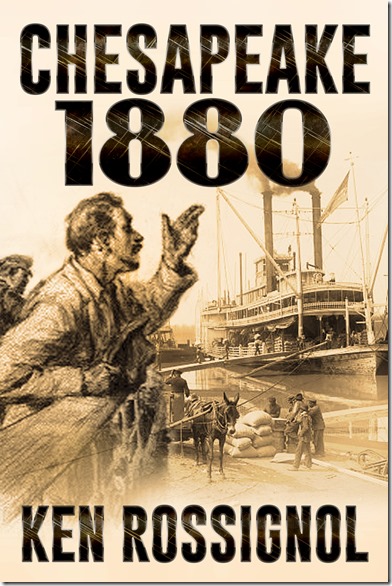 Thought For The Day – When telephones had wires, people were free.

2 Responses to “Gators And Birds And Rockets, Too!”