I have often heard the saying that a stranger is just a friend you’ve never met before. I’m not sure if that’s true or not because according to Miss Terry, I’ve never met a stranger. I strike up conversations with people standing in line at the grocery store, sitting in restaurants, or walking down the street. I’ve always figured I’m such a charming little cherub that it would be unfair of me not to let the rest of the world get to know just how wonderful I am. Don’t you agree?


And what good are friends if you can’t exploit them now and then, right? I mean, if someone’s my friend, they probably want to make me happy, don’t they? And who am I to deny them that?

A good example is the time when we were parked at the Escapees RV Club’s North Ranch Campground near Congress, Arizona. It was a laid-back Sunday afternoon and I happened to look across the street and saw a woman washing the windows on her motorhome. What gentleman is going to sit on his rear end and watch that happen?

Not me. Instead, I gave her an alternative. I went outside and told her to put that darn squeegee down right that minute and go inside and make me cheesecake. We had a good laugh about it before Terry made me come inside and stop bothering the adults. But an hour or so later there was a knock at our door and there was my new friend, bringing me freshly made cheesecake.

Another time, we had spent the day touring some of the historical sites around Richmond, Virginia, and on the way back to our campground we stopped at a Red Lobster for dinner. There were a few people standing around outside with pagers, waiting for a table, and after I checked in and got our pager I noticed an older couple getting out of a car with a birthday cake. I told them that was very thoughtful of them to bring me a cake, and it was just one more example of that fine Southern hospitality that the folks in Virginia are known for.

As it turned out, they were meeting their son and his family to celebrate his birthday, and we all had a big laugh about it. But just like the lady with the cheesecake, about the time we were finishing our meal the waitress brought me over a huge piece of birthday cake and told me it was complements of our new friends.


Of course, it doesn’t always work out that way. Just the other day we were at Dustin’s Barbecue here in Edgewater when someone came in with a birthday cake. Hoping that I could re-create history, I looked at it with imploring eyes and a drooling mouth. I got the usual laughs, but no birthday cake this time around. But at least the lady gave me a candle. It didn’t taste nearly as good as a birthday cake, and it took forever to scrape the wax off of my teeth, but anything’s better than nothing, right? 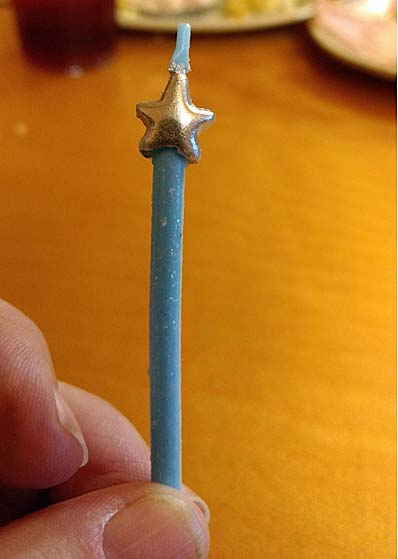 Now, don’t get me wrong, I don’t expect some stranger to feed me every time I talk to them. Oftentimes I will settle for a friendly smile, a kind word, or a hug. A few years ago we were at Old Sturbridge Village in Massachusetts, and after several hours of soaking up living history, we were getting ready to leave. A family had gathered in the parking area to greet some more folks who were getting out of a big van.
Among them was an octogenarian gentleman who everybody greeted as grandpa, giving him hugs and telling him who they were, because he obviously couldn’t remember who everybody was. So, it was a hug and a, “I’m Tommy, your great-grandson” or another hug and “Hi Grandpa, I’m Susan’s daughter, Emily.”

I figured what the heck, why not? I went up and hugged the old man, too. He asked me who I was and apologized because he could not remember my name or face. I told him I was just a guy standing around who needed a hug. The old guy seemed to be tickled by that, but he didn’t offer me a butter rum lifesaver or anything. Oh well, you win some, you lose some.

One of our RV adventures took us to Mackinac Island, Michigan, a beautiful resort town where cars and trucks are not allowed, and transportation is done by walking, horse drawn carriage, or bicycles. It’s a popular tourist spot and the crowds can cause problems if you’re not careful. Miss Terry and I were strolling along the main street window shopping, and paused with a crowd of people to watch a young man inside one of the island’s many fudge shops working the fudge on a marble table to cool it. After a minute or two, I knew I either had to move on or blow my diet for the next six months. So, with longing eyes still locked on the fudge, I took my lady’s hand and led her on down the sidewalk. We had reached the next store or the one after that when I glanced at Terry to say something and realized I was holding the wrong woman’s hand!

Apparently I had just grabbed the closest hand, and it belonged to another tourist. She, thinking it was her husband, never realized it was a different handsome devil leading her astray. We both looked at each other in shock, while her husband, following close behind us, was laughing so hard he was barely able to stand up. I don’t know which of our faces was the reddest, the lady’s or mine with embarrassment, or his with laughter. Finally, with tears rolling down his checks, he managed to jerk a thumb over his shoulder in the direction we had come from, and said, “I think you left someone behind. Yours is still back there watching them make fudge.”

And that’s just one example of why I need adult supervision at all times. I’m just too darn friendly.

It’s Thursday, so it’s time for a new Free Drawing. This week’s prize is an audiobook of Stillborn Armadillos, the first book in my John Lee Quarrels series. To enter, click on this Free Drawing link or the tab at the top of this page and enter your name (first and last) in the comments section at the bottom of that page (not this one). Only one entry per person per drawing please, and you must enter with your real name. To prevent spam or multiple entries, the names of cartoon or movie characters are not allowed. The winner will be drawn Sunday evening.

Thought For The Day – My wife thinks I’m crazy, but I’m not the one who married me!

One Response to “Making Friends”