I have been called a lot of things in my life, some of them good and some of them bad. But nobody has ever accused me of being remotely gifted when it comes to technical things.


People keep saying “Just Google it” when I’m trying to figure how to do something. But to do that I have to be able to move that little mousey thing on my desk around, type in something in a search engine, if I can even find a search engine, and then my fat little fingers are going to hit the wrong keys and instead of finding something on pontoon boats, for example, I may end up reading the latest news from Phnom Penh, Cambodia.

No, I don’t Google, I Greg. Why Google when I have Greg White on the payroll? He’s a walking, talking encyclopedia, and a lot easier to get hold of than Google. Of course, once he finds out he’s on the payroll and hasn’t been getting a check for the last six or seven years he might be harder to get in contact with.

And all of that was just a lead-in to the fact that I discovered something last night that most six-year-old kids probably already know. We have had Spectrum TV and Internet service ever since we bought our house in October of 2016. We have a TV in the living room and in the bedroom, and I make no apologies for it. I enjoy watching TV in the evening, especially true crime shows, and once in a while I even get an idea for a book from them. In all that time, I had no idea that our remote controls lit up!

If we were in bed watching TV before we fell asleep and I wanted to change the channel, first I had to turn on the light so I could see the buttons on the remote control and know what I was pushing. Just by accident yesterday evening I happened to bump the bottom center button on one of our TV remotes and the darn thing lit up! Who knew it could do that? Oh yeah, probably anybody who ever read the word “Light” under the button, but aside from them, who knew? Yes, I really am that dumb.

In other technological news (yes, if it has a cord and uses electricity, it technical in my book), last week I shared with you that we bought an adjustable bed for my cousin Beverly, and we were so impressed with it that we bought one for our bedroom, too. It’s very cool, and with just a touch of a button we can raise the head of the bed this high if we want to. 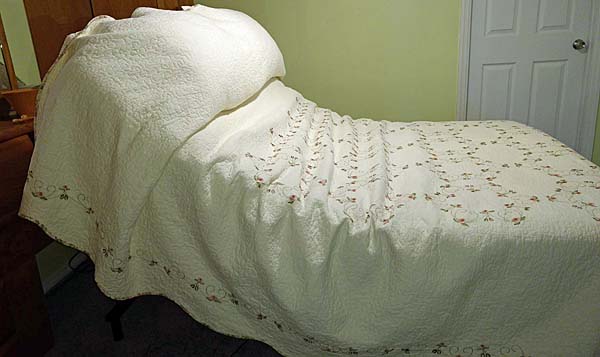 And with another push of a button we can raise the foot this high. Or we can raise both head and foot in any combination. 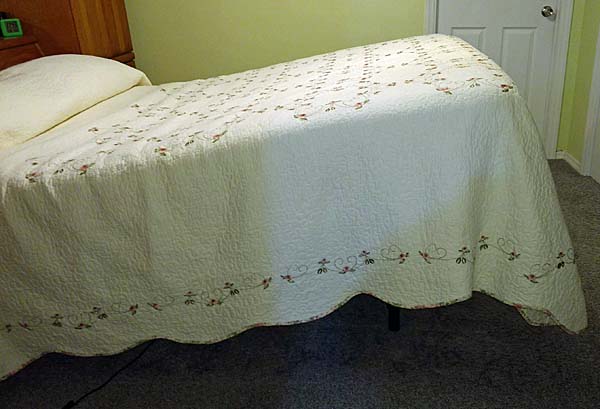 But, just like the TV, the remote control is turning out to be the bane of my existence. When we ordered the bed it was a close-out, one of the last ones Fox Mattress had with the wired remote, and the price was pretty good. And while I really like the bed, I hate the remote control. It has a curled cord like on an old telephone that is very stiff and is not long enough. Add to that the fact that the cord connects just about dead center under the bed, and the result is that whenever I use the remote to raise or lower part of the bed, the minute I let go of it the cord retracts quickly and it winds up on the floor under the bed. Then I have to get up and dig the darn thing out from under the bed.

I called Trina, the nice young lady that worked with us at Fox, to ask if they made some kind of an extension for the cord, and she said no. But for not much more money she offered to replace the bed with a new one with the wireless remote. And it even comes with vibration! Remember those old motel room Magic Fingers? How cool is that? And no quarters needed. That sounded like a heck of a deal to me, so this Saturday they will bring out the new bed and swap them out. I wonder if the new bed’s remote control also lights up in the dark? I guess I’d better check that out.


Yesterday I dropped Miss Terry and Beverly off at Beverly’s new rheumatologist for her first appointment, and made a quick run to Daytona Beach Chrysler-Dodge-Jeep, where we bought Terry’s Chrysler Pacifica. It came with an extended warranty that includes free tire rotation and oil changes, and it was time to have that done. I figured it was a good way for me to kill time while the ladies were at the doctor’s office.

It took them about an hour to do the oil change and tire rotation, which was okay with me. But when I saw this sign in the waiting room I had to wonder what kind of place I was dealing with. 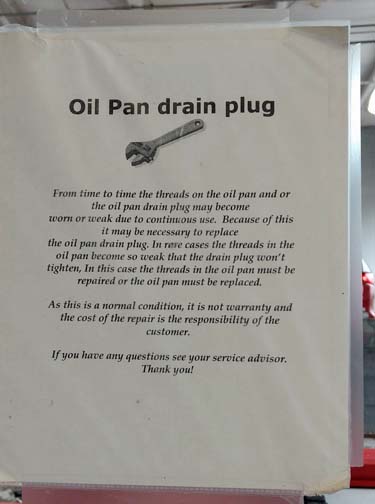 I bought my first car 51 years ago and I have had a lot of vehicles over the years. Back when I was young and poor, I even did my own oil changes. And while I have heard of people stripping the threads on an oil drain plug, I have never experienced it. And I have never heard of a drain plug becoming “worn out” and leaking before. Have you?

My first thought was that they must have some pretty heavy-handed mechanics working there and it’s a way to try to cover their butt if they cross thread something and cause a leak. Maybe I’m wrong, but I darn sure checked for leaks under the minivan when I got home!

Thought For The Day – Without nipples, boobies would be pointless.