Between catching up on a ton of email that accumulated while we were on the road to Arizona and back, working on a new John Lee Quarrels book, getting my cousin Beverly settled in and arranging for the things she needs, and setting up doctor appointments for her and for us, it feels like we have been going nonstop ever since we got back to Florida a week ago today.


My writing got pushed to the back burner while we were making our trip west, but since our return I have managed to get close to 9,000 more words written in Sweet Tea And Jesus. But I’ve still got a long, long way to go on it. How do you write a book? One word and one sentence and one paragraph and one chapter at a time.

I also arranged for my latest release, Big Lake Wedding, to be formatted for print. I should get that back any day now, and then, once the print cover is formatted, I will upload it and get things going there. I would say within the next week it will be available in print, and of course the e-book version has been out for about a month now.

Yesterday Beverly had her first appointment with her new primary care provider. After dropping her and Terry off at the doctor’s office I went to the local touchless carwash to try to get 4,500 miles of road grime off of Terry’s Chrysler Pacifica. It got the worst of it off, but it was not exactly a good job and there are still a lot of streaks and places it missed. I’ll have to finish that job myself, I guess.

When I was done at the carwash I went to Coastal Integrative Healthcare and had my chiropractor, Melony Thomas, give me an adjustment. That lady can work wonders! I walked in feeling like six kinds of crap and walked out feeling like just one kind of crap. That’s a big improvement, and while I don’t expect her to fix the damage done 45 years ago, at least under her care I can function.

Back at the doctor’s office I still had to wait for about an hour for Beverly to be done. So I settled in to read one of Ben Rehder’s excellent Blanco County mystery books. Ben’s excellent combination of comedy and mystery makes for a great read, and anybody who enjoys my Big Lake books is sure to enjoy the Blanco County series. You can read the first one, Buck Fever, for free on Amazon. Check it out, I know you will like it.

In spite of the fact that Ben is a hell of a fine writer, I was feeling droopy and at some point I dozed off and woke myself up with a loud snore. Opening my eyes, halfway startled, I was relieved to see that there was no one else in the waiting room. Good, I got away with that one. Or so I thought, until the lady at the reception desk asked, “Are you okay, sir?”


A few days ago we stopped at Fox Mattress in Holly Hill, which is a suburb of Daytona Beach, and ordered Beverly an adjustable bed because there was no room to bring the Craftmatic adjustable bed she had been using from Arizona. It is scheduled to be delivered on Saturday, but while were there, Trina, the nice sales associate, mentioned that they had a closeout on queen-size adjustable bed platforms. She also mentioned that for somebody with a bad back like me, it might be something to consider. While I was at the chiropractor’s I had asked about it, and Melony said it would be well worth the money for me. So, when we left the doctor’s office we drove to Holly Hill and stopped at Fox to ask if they could deliver a queen-size to us on the same day. Trina said it was no problem, so I went ahead and ordered it.

When we left Fox Mattress we stopped at Badcock and More and picked up the recliner we had ordered for Beverly. From there we had dinner at Hibachi Grill & Supreme Buffet and didn’t take Beverly long to figure out why this is one of our favorite Chinese buffets in the entire country. They always have plenty of fresh hot items to choose from and the prices are very good.

Back at home, we brought the new recliner in and assembled it. Seeing our three recliners together, mine on the left, Terry’s in the middle, and Beverly’s on the right, you would think a bunch of old couch potatoes live here. Or would that be recliner potatoes? Is there even such a thing? 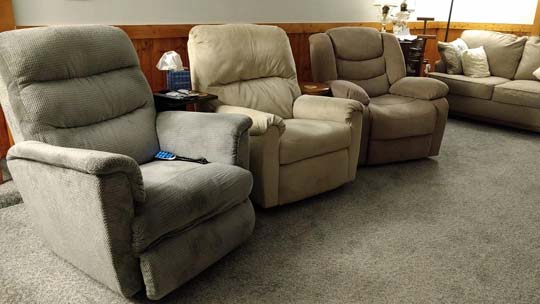 I was pleased to see that the mail brought the new personalized license plate I had ordered for my Mustang. When I ordered it back in early January, they said it would take from six weeks to three months to arrive, and it was just about six weeks to the day. 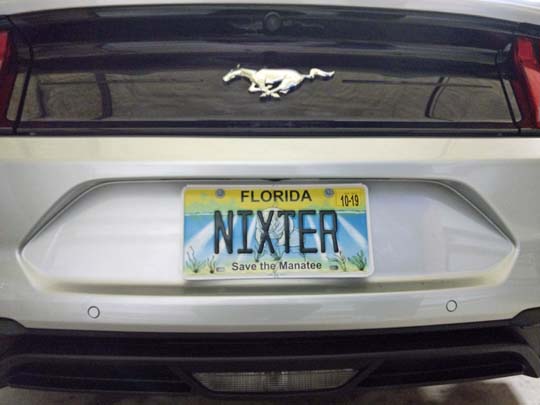 We have more appointments scheduled throughout the rest of this week, and we need to do something about our telephone service. I plan to switch to Consumer Cellular, which uses AT&T towers, since the Verizon service sucks here. Based upon the pricing they quoted me, along with the AARP discount, we will be paying less than half of what we have been paying with Verizon for so many years.

Thought For The Day – A perfect marriage is just two imperfect people who refuse to give up on each other.