Nick's Blog » You Can’t Be Too Careful

We needed a day out, so yesterday we drove down to Titusville and spent some time goofing off. There was a police patch and badge collector show at the Elks Lodge that I wanted to check out. Even though it was a cold, windy day, there was no rain in the forecast, so we took the Mustang. I bought it in early December and when we left the house yesterday morning it still only had 260 miles on the odometer. I figured it was time to put a few more on it.


There were a lot of interesting badges and patches on display at the show, and I got to meet a couple of guys that I have talked to online on some of the Facebook badge collector groups. I also managed to find three nice badges to add to my collection. The one on the left is from Hoquiam, Washington, where I lived when I started my first newspaper a lifetime ago, the one in the center is an Arizona Highway Patrol badge, and the one on the right is from Hudson, Ohio, which is a small town just north of Akron.

Our neighbor Chris Fisher is an auctioneer and he had told me about a big auction that was going on in Titusville yesterday, so when we left the Elks Lodge we went by to check it out. They had everything from tools and firearms to antiques and vehicles. Check out this wildly painted Chevrolet El Camino. I bet the paint job cost as much if not more than the vehicle itself is worth. 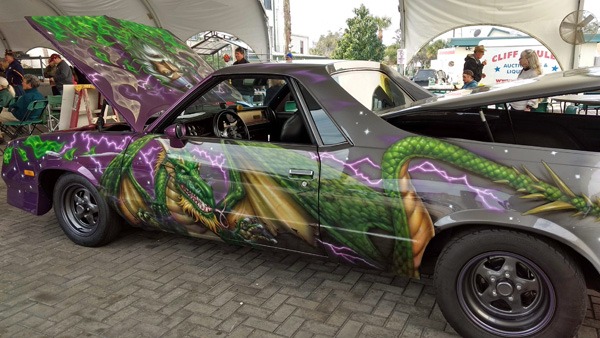 The auction was outside and it was too cold for us to stand around for very long, so we left and stopped at Wildwood Antique Mall, another one of our favorite places. We didn’t find anything that demanded we take it home with us, but it’s always fun to browse there.

Driving back home, I made a very dumb mistake that could have ended tragically. We were on US Highway 1 northbound and I had moved into the left lane to pass some slow-moving vehicles. Right behind me was somebody in a big hurry who was riding my bumper and flashing his headlights to signal me to get out of the way. It really irritates me when people do this. They seem to think they are the only people that matter in the world, and how dare you slow them down for even a second? I looked in my mirrors and didn’t see anything in the right lane, so I put on my turn signal and moved into it to allow Mr. Important to get wherever he was going in such a hurry. But in doing so, I missed a motorcycle who was in my blind spot and I pulled directly in front of him. He had to jam on the brakes to keep from hitting me, and I floored the Mustang to get out of his way. Fortunately, we avoided a collision, but I felt absolutely terrible about it. You just can’t be too careful. Oh, and the fool that was in such a hurry? He got right in front of me and turned onto a side street less than a block away. But no matter what he did, the fault was entirely my own and I am very grateful nobody got injured or worse by my carelessness.


A couple of miles from our house there is a little restaurant called Camelot Country that we have said we should stop in and check out, but never seemed to get around to doing. We decided yesterday would be a good day for that. It’s not very big, and it’s not fancy, but the service was fast and friendly, the food was good down home comfort fare, and the prices were more than reasonable. We will definitely be going back. 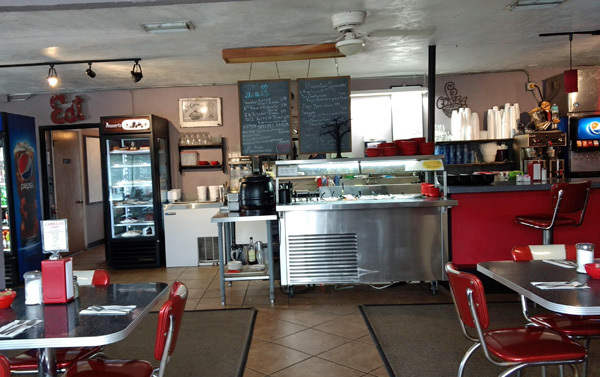 Back at home, I spent a couple of hours answering emails and things like that, then we spent the rest of the evening watching television and relaxing. It seemed like a pretty good way to spend a chilly Saturday evening.

Several people e-mailed comments about yesterday’s blog, The Death Of A Good Man, telling me they enjoy true history stories like that and asking if I will post some more occasionally. Definitely so, because I enjoy them, too. One of the people who wrote me included a link to a story about the murder of Special Agent Klein with a bit of very strange information that I didn’t know. As I said in the story, when Special Agent Klein and his partner tracked down the bad guy, George Barrett, they found him in West College Corner, Indiana, which is just across the state line from Ohio. Actually, the shooting took place right on the state line. In fact, Barrett was standing in Ohio when he fired the shots that killed Special Agent Klein, who was about 20 feet away from him, but was in Indiana. So though the fatal bullets were fired in one state, their target was in another state. I wonder how often something like that happens?

Today is your last chance to enter our Free Drawing for an audio book of undone, the first book in my buddy Jason Deas’ new Burt Bigsley mystery series. To enter, all you have to do is click on this Free Drawing link or the tab at the top of this page and enter your name (first and last) in the comments section at the bottom of that page (not this one). Only one entry per person per drawing please, and you must enter with your real name. To prevent spam or multiple entries, the names of cartoon or movie characters are not allowed. The winner will be drawn this evening.

Thought For The Day – I think my car needs an alignment. It always pulls towards Dunkin’ Donuts.

One Response to “You Can’t Be Too Careful”