Nick's Blog » The Death Of A Good Man

At Evergreen Cemetery in Southgate, Kentucky, we came across the grave of an American hero who made the ultimate sacrifice in service to our country. 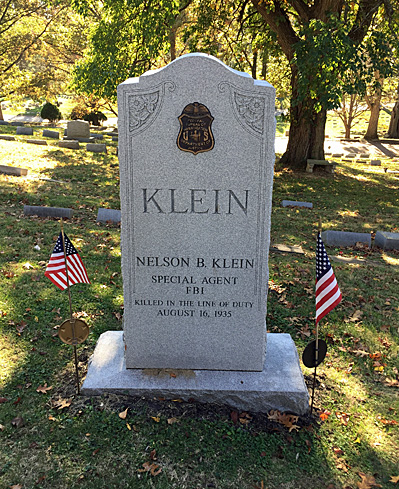 Always wanting to improve himself, after the war Klein took correspondence courses in everything from English and psychology to drafting and commercial law. All of this aided him in his law enforcement career that followed. Starting out as a private investigator, he joined the Bureau of Investigation, the precursor to the Federal Bureau of Investigation, in 1926. This was the height of the roaring 20s, and prohibition was the law of the land.


Klein quickly made a name for himself chasing gangsters like John Dillinger and Baby Face Nelson, and participating in front page investigations like the Alice Berry Stoll kidnapping in Louisville. By 1935, he had risen through the ranks and served as the number two man in three different field offices, including Cincinnati.

By all accounts, Nelson Klein was a good man, respected by his colleagues and the people who knew him on a personal level. His integrity and work ethic were admired by all who knew him.

George W. Barrett, on the other hand, was a career criminal with no conscience whatsoever. Though he came from a good Kentucky family, he seemed to have been born evil. As a juvenile, he tried to shoot a police officer who arrested him for moonshining. Barrett pulled a gun, but the policeman was faster and shot him instead. Though it was a flesh wound, in hindsight it might have been better for the rest of the world if the cop’s bullet was fatal.

Out of jail, the young man became known as a bully and criminal. By his own account he killed five or six men before heading to Cincinnati, Ohio in 1917 when things got too hot for him at home. While working as a streetcar conductor to provide a look of legitimacy, he had a thriving side business dealing in stolen diamonds. He began referring to himself as the “Diamond King.”

Returning to Kentucky, Barrett quickly got into more trouble, first losing an eye in a shootout with his brother-in-law. Barely recovered from that incident, he murdered his own 73 year old mother and his sister. He was indicted for their murders but witnesses suddenly disappeared or suffered from memory loss due to his harassment and intimidation. Soon after, the district attorney who brought the murder charges against him was assassinated.

Barrett’s next criminal endeavor was stealing cars and transporting them across state lines to be resold. This brought him to the attention of the Federal Bureau of Investigation, and on August 16, 1935, Barrett and Special Agent Nelson Klein had their fateful confrontation.

Klein and his partner, Special Agent Donald McGovern, were investigating the stolen car ring and tracked Barrett down at West College Corner, Indiana, just across the Indiana-Ohio state line. Identifying themselves as FBI agents, they attempted to arrest the career criminal but Barrett had no intention of going down easy. He immediately pulled a revolver and began firing, striking Special Agent Klein six times. As the brave lawman fell, mortally wounded, he managed to shoot back, wounding Barrett in both legs.

After being treated for his wounds, Barrett was lodged in jail awaiting trial. Found guilty of the murder of a government agent, he was sentenced to death. He was the first person to receive the death penalty under a new law making it a capital offense to kill a special agent of the FBI. Justice was swift in those days, and on March 24, 1936, less than nine months after killing Special Agent Klein, he was hung for his crimes. A fitting end for a very bad man who took the life of a good man and dedicated public servant.

To add a touch of irony to the story, Nelson Klein’s son, Nelson B. Klein, Jr., followed in his father’s footsteps and became an FBI agent. Tragically, he lost his life in a single car accident near Savannah, Georgia when his department issued vehicle left the roadway and overturned several times. At the time of the crash, Special Agent Klein was on his way to a law enforcement conference in Statesboro, Georgia, where he was scheduled to represent the FBI.

You can learn more about Special Agent Klein and Barrett in the book The G-man and the Diamond King, written by former FBI agent Bill Plunkett and available on Amazon.


Be sure to sign up for our latest Free Drawing. This week’s prize is an audio book of undone, the first book in my buddy Jason Deas’ new Burt Bigsley mystery series. To enter, all you have to do is click on this Free Drawing link or the tab at the top of this page and enter your name (first and last) in the comments section at the bottom of that page (not this one). Only one entry per person per drawing please, and you must enter with your real name. To prevent spam or multiple entries, the names of cartoon or movie characters are not allowed. The winner will be drawn Sunday evening.

Thought For The Day – Sometimes the first step to forgiveness is realizing that the other person is a complete idiot.