Today is a very special day for myself and Miss Terry. It’s our 21st wedding anniversary, and we still feel (and often act) like newlyweds. This was not the first marriage for either of us, and believe me, it was not something that either one of us was looking for, or even expected to happen. In fact, when it did happen it took us both by surprise. But isn’t that the way it sometimes goes? We often find the best things in life when we least expect them. 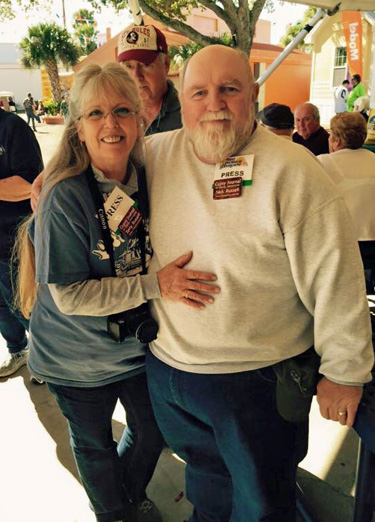 We had known each other for years and I was always impressed with both her beauty and her intelligence, not to mention the fact that she was a very nice person. But the world is full of beautiful, intelligent people that are not very nice once you get to know them. Not with Terry, she truly is beautiful, inside and out.

Terry always wore a ring so I assumed she was married. I was in a bad marriage and when it ended I swore I was never going to make that mistake again. Famous last words. Soon after I became single we both realized that there was a chemistry between us and an attraction that was growing. Terry also told me that she had been single for fourteen years and the reason she wore the ring was to put off anybody who showed any interest, because she had her own marriage horror stories and she wasn’t making that mistake again!

On our first date, we went to the movies and then to a 24-hour restaurant where we sat and talked until daylight. Two weeks later, our second date was at our town’s Fall Festival. At the time, I was on the board of directors of the women’s shelter and the town council was supposed to help our fundraiser by taking turns in a dunking booth. It was about 60 degrees at 7500 feet elevation and they all suddenly decided that falling into the cold water wasn’t dignified and backed out. So I put on a pair of swimming trunks and climbed inside.

Being the publisher of a small town newspaper means you are going to make a lot of friends, and a lot of enemies. One of those friends ran the local radio station and was doing a live remote broadcast from the festival. He invited anybody who wanted to have some fun to come down and try to dunk me. And for the next three hours a long line of people were lined up throwing balls and dunking the fat guy. The price of three balls to throw kept going up and they still kept coming. The dunking booth was a canvas bag inside a wire frame, and me being so short, I had to climb the frame to get back onto the seat. By the time I was done, I was blue from the cold and had bloody toes from crawling up that darned bag frame! But we had earned $3,000 for the shelter, so it was well worth it. Terry said I looked so much like a little Smurf that she felt sorry for me, and took me home and kept me. Except for when she was in the hospital during her cancer treatment, we have never spent a night apart since then.

It wasn’t always easy because we both have strong independent personalities, and when we got together we were both in our mid-40s and pretty set in our ways. We had to learn to compromise, to communicate, and most importantly, to learn to trust again. But it was worth it in so many ways. We’re not only married, we truly are best friends and are never happier than just being together. The first thing we say when we open our eyes in the morning is “I love you,” and it’s the last thing we say to each other before we fall asleep at night. It’s been a wonderful 21 years, and I’m looking forward to many, many more together.

I’m a very fortunate man to be able to live this fantastic life that I have, to make a living doing something most people can only dream of, and to be able to share it with my best friend in the world. Happy anniversary, Terry. I love you and I would do it all over again in a heartbeat.

Thought For The Day – A successful marriage requires falling in love many times, and always with the same person.

31 Responses to “Our Love Story”