More than once I have heard someone say that the reason rich people have so much money is because they’re so cheap that they never want to spend it. I’m not sure if that’s true or not, but I will say that some of the most “frugal” people I have known were also people who could afford anything they wanted or needed. That can be a good thing, or a bad thing. Spending money just for the sheer sake of spending it just seems dumb to me, but just as dumb are people who try to cut corners and do things on the cheap when they really shouldn’t.


A good example of this is a fellow I talked with quite a bit the other day. He emailed me saying that he was dry camping at an Elks lodge in southern California, and just before he arrived his 2013 Newmar Dutch Star motorhome had started smoking a lot and his oil light and check engine light came on.

Once he got parked he went back to check things out and the car he tows behind him was completely covered in oil, as was the back of the coach. He said he checked his dipstick and it was dry. He also said that the oil felt gritty and there were little bits of something in it. He added that when he had done a full walk-around checking everything before he left Yuma, Arizona that morning there was no trace of leakage and the oil was full. After cleaning the car off enough that he could see through the windshield, he drove someplace and bought oil and brought it back. It took almost five gallons to bring the dipstick back to the full line. Keeping in mind that the Cummins ISC diesel engine has a 22 quart capacity, his engine was almost bone dry! He lost all of his oil in a 130 mile trip.

He asked for my advice and I suggested he call Redlands RV in Redlands, California, about 100 miles from his location, and make arrangements with them to bring it in. Then I suggested he should call his roadside service company (CoachNet) and have it towed there instead of trying to drive it. His response was that shops charge  over $150 an hour and he wasn’t going to pay that kind of money if he could avoid it. Then he asked me if I knew of any mobile RV techs in the area where he’s at. I told him that you call an RV tech when your water heater stops working or your air-conditioning is not doing its job, not when you have an engine problem.

I got an email from him again later that day saying that he had found a mobile tech that hung out at the Elks lodge and asked him to take a look at his problem. That worthy individual walked outside and quickly diagnosed the problem as a leaking oil filter and tightened it up, only charging him $10. He sure was glad he hadn’t taken my advice and spent a fortune on what turned out to be an inconsequential problem.

Guess who I heard from yesterday? He said he left the Elks Lodge and got about 50 miles down the road when his check engine light and alarm buzzer started going off, and by the time he could get to the shoulder of the road the engine had stopped working. Everything was again covered in oil. He was towed to a shop in some small town, where the mechanic checked it out and told him the engine was seized.


There are very few times in my life when I really, really want to say “I told you so,” but this was one of them. Folks, here is a tip for you from your old Uncle Nicky – don’t try to find a $10 solution for a problem on a $175,000 coach. You’re going to regret it every time. Guys like that are the reason I have this shirt. 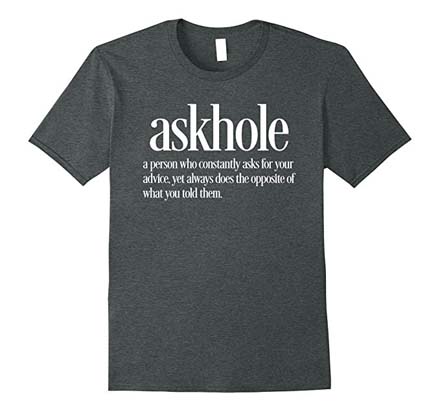 Thought For The Day – I would like to thank my arms for always being by my side, my legs for always supporting me, and my fingers, because I can always count on them.