These days, Eastland, Texas is a quiet little town located just off Interstate 20, between Fort Worth and Abilene. But at one time Eastland was a bustling place, as the county seat and the center of trade for the local oil booms that took place across the region.


In the 1920s, Eastland boasted a population of over 25,000, with five banks, several hotels, and shops selling the finest wares. Who could blame the good citizens of Eastland if they might occasionally look down their noses at the less refined rough and tumble roustabouts who spent their time in some of the smaller oil patch towns in the area? But before the decade was out, Eastland would take a walk on the dark side itself.

The neighboring town of Cisco, just a few miles to the west, was busy on December 23, 1927, as people went about their daily routines or made last minute preparations for Christmas, only two days away.

Just about noon, a local ne’er-do-well named Marshall Ratliff, who had served time for armed robbery, walked down the sidewalk wearing a Santa Claus costume and entered the First National Bank. At the same time three accomplices, Louis Davis, Robert Hill, and Henry Helms entered the bank by a rear door that opened onto a busy alley. Both Helms and Hill were also ex-cons, with records for armed robbery.

While his accomplices drew guns and announced a robbery, “Santa Claus” grabbed the money from the bank tellers’ drawers and forced one bank employee into the vault. The robbery was ill-planned right from the start, and things quickly went downhill when a woman entered the bank with her daughter to make a deposit. Realizing that a robbery was in progress she fled back outside, ignoring the bandits’ orders to halt, and reported the crime to Chief of Police G. E. (Bit) Bedford.

As the chief and his deputies rushed toward the bank, word spread quickly through the little town. Citizens armed themselves with rifles, pistols, and shotguns and descended on the scene of the crime.

Realizing that their plan had been exposed, the robbers fled out the back door of the bank and into the alley, directly into the gun sights of Chief Bedford and his hastily assembled posse. At 6’4” tall, and 220 pounds, Bit Bedford was a formidable man, and as a lawman, he was absolutely fearless. He had arrested bootleggers and murderers in his time and faced down armed mobs without flinching. So it was without hesitation that he fearlessly advanced down the alley at the outlaws, firing a shotgun as he went. When his shotgun jammed, the brave lawman threw it aside and reached for his revolver, but a round from one of the robbers’ guns slammed into him and knocked him off his feet. Seconds later, police officer George Carmichael was shot in the head and fell.

By the time the brief but bloody shootout was over, Ratliff and Davis were both wounded, as was Alex Spears, the bank president, and several hostages the robbers used as a shield.


Escaping into their car under a fusillade of bullets, the outlaws only made it a short distance before commandeering an automobile driven by a local family. But they were thwarted when the fourteen year old son, who was behind the wheel, took the Oldsmobile’s keys with him when ordered out of the car. Frustrated, the bandits crawled back into their original car, managing to leave their wounded comrade Davis and the $12,500 loot from their robbery behind in the Oldsmobile.

Running a gauntlet of angry bullets fired at them from both sides as they passed, one tire shot out on their car, and Hill now wounded, they somehow managed to get away from town and disappeared into the sagebrush north of Cisco.

The manhunt that followed was one of the biggest in Texas history, but the three remaining members of the gang managed to elude capture for several days, stealing cars and kidnapping one driver as they went. In a skirmish with deputies, Helms was also wounded and Ratliff was captured. Helms and Hill escaped but were captured a few days later.

In all, the robbery and shootouts that followed claimed the lives of Police Chief Bedford and Officer Carmichael, as well as robber Louis Davis. At least six civilians were wounded, along with the other three bandits.

When brought to trial for their crimes, Hill entered a guilty plea to armed robbery and was sentenced to 99 years in prison. Over the next several years, he escaped custody three times, and was recaptured each time. Eventually he seemed to see the error of his ways, becoming a model prisoner, and was paroled in the mid-1940s. He changed his name, moved to a small town in west Texas, and by all accounts became a productive citizen.

Witnesses at the scene identified Helms as the one who actually shot the two policemen, and he was convicted of their murders. He was executed on September 6, 1929, after an unsuccessful attempt to escape the electric chair with an insanity plea.

The last member of the gang, Marshall Ratliff, was sentenced to 99 years in prison for the bank robbery, and was also given the death sentence for taking part in the shootout that took the lives of Bedford and Carmichael.

Faking an insanity case, Ratliff was returned to Eastland County in late 1929 and held in the Eastland jail while his competency was determined. So convincing was he that jailers Tom Jones and Pack Kilbourn believed that he really was insane and fed him and bathed him every day.

Taking advantage of their belief that he was not dangerous, Ratliff played along until November 18, when the jailers let their guard down for one second. Springing to the attack, he grabbed Pack Kilbourn’s .38 revolver and shot Jones three times before Kilbourn jumped on him and knocked him to his knees. In the brutal fight that followed, both men were battered and bloodied, but Kilbourn was eventually able to wrest the gun from the madman’s hands and club him into submission with it.

Tensions were already high in Eastland County over the criminal’s ploy to escape justice with his insanity plea. When word of the escape attempt and Tom Jones’ injuries spread, a mob began to form outside of the old brick jail. All day long, reports from the hospital brought news of Tom Jones’ condition. First he rallied, and then he began to fail.

Everybody knew something was going to happen, and soon the streets of Eastland were packed with hard eyed oil field workers, ranch hands, and families who came to see the excitement. All that day, and into the night, the crowd continued to grow. Estimates were that over 1,000 people filled the streets around the jail.

By noon on the 19th, it was obvious that Tom Jones was not gong to live much longer, and the mood of the mob grew uglier. The County Sheriff was out of town, delivering a prisoner to the state prison in Huntsville, and the jailer knew that he was on his own. As darkness fell, the mob rushed the jail, sweeping Pack Kilbourn aside as he tried to stop them. They stormed upstairs, dragged Ratliff from his cell, and took him a block away, where a rope dangled from a utility pole.

Placing the noose around his neck, the outlaw was dragged off his feet, only to come crashing back to earth when the rope broke. Several men ran to a nearby hardware store and secured another rope, and Ratliff was again pulled into the air, kicking and screaming. His protests were cut off as the rope dug into his neck, and soon he was dead.

The crowd eventually dispersed, leaving the body of the outlaw dangling as a warning to others who might consider a life of crime. Hours later, Tom Jones died of his injuries, leaving behind a wife and six children.

Nobody was ever indicted in the hanging of Marshal Ratliff, known as the Santa Claus bank robber. His lynching was the last to take place in Texas and there are few alive today who remember that violent time in Eastland’s history. Today the old jail building, located at 210 W. White Street, is used by the Sheriff’s Department for storage, and visitors can tour a small museum on the first floor, by appointment. 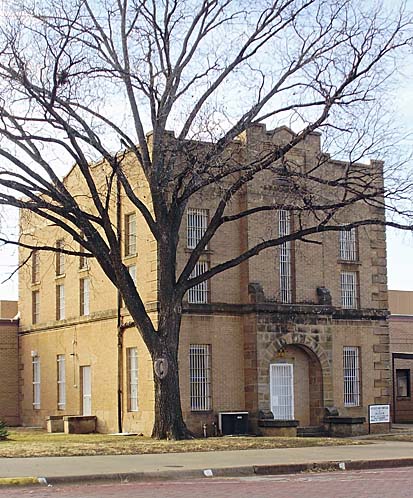 A block west, at the corner of Mulberry and White Streets, a granite tablet tells the story of the Cicso bank robbery and the events that followed, the only telltale reminder of why Eastland, Texas became known as the town that hung Santa Claus. 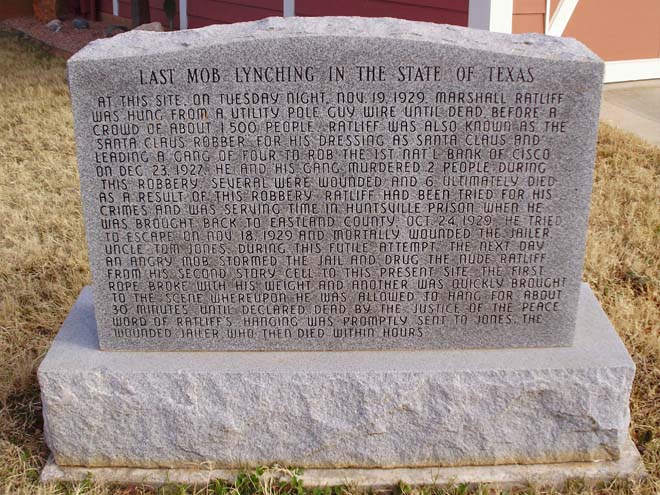 Thought For The Day – If you don’t want a sarcastic answer, don’t ask a stupid question.