Kids of my generation had real heroes. Not the pampered, steroid-bulked athletes with multi-million dollar a year contracts, or rock stars whose greatest achievement seems to be ingesting as many illegal substances as the human body can stand in the shortest amount of time. Our heroes were good guys in white hats who squared off with villains and stared them down with raw nerve and a steely eye.


As a boy, I can remember Saturday morning television as the highlight of my week. Sitting cross legged on the floor I learned about right and wrong and witnessed justice in action in thirty-minute segments. Sure, there were a few cartoons, but even Mighty Mouse wasn’t above dishing out a lesson or two to the bad guys. But mostly I loved those good old black and white (that’s all there were back then) half-hour series of yesterday’s television heroes like Roy Rogers, the Lone Ranger, Sergeant Preston of the Yukon, and Sky King.

What boy of my generation can forget that strong voice belting out “Out of the clear blue of the western sky comes Sky King!” as the image of a Cessna 310 in flight flew across the television screen and rolled off in a turn to the left?

Schuyler (Sky) King was an Arizona rancher and former World War II naval aviator who rode a palomino horse named Yellow Fury and flew a couple of airplanes, the Songbird and Flying Arrow, while running the Flying Crown Ranch with his beautiful niece Penny. Now come on, ‘fess up guys. How many of you had a crush on Penny? I was too young to even like girls back then, but Penny… she was a woman! A beautiful young woman who rode horses and flew around in airplanes helping catch the bad guys! I may not have known about lust back then, but I sure was in love! 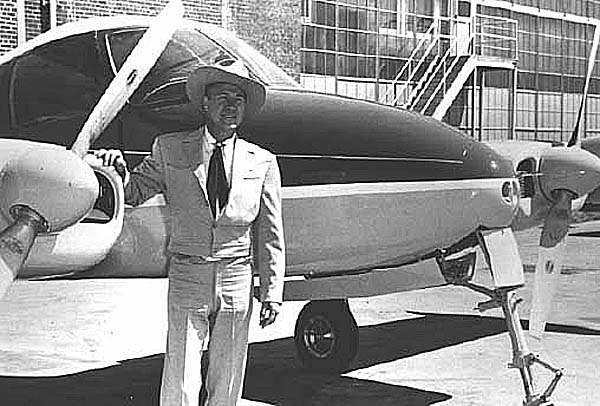 Sky King and Penny (and in the earlier shows, nephew Clipper) had one adventure after another as they chased down bad guys and saved the world (or at least the ranch) from one dastardly plot after another. 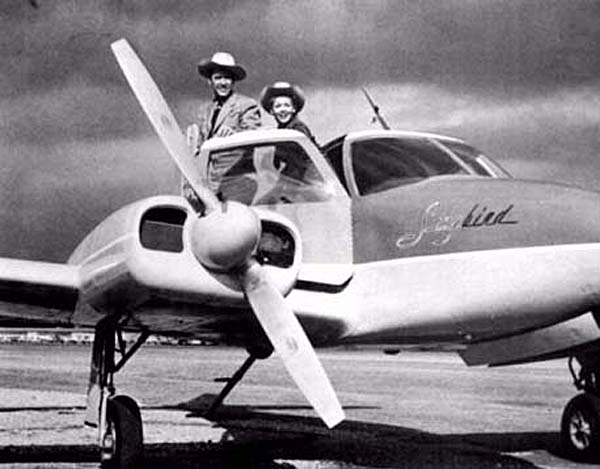 Somehow the airplane (or airplanes, since more than one was used during the television show’s run) was always involved, either in watching what was going on from above or getting somewhere just in the nick of time to foil the latest evil scheme. Things were not always quiet on the ground either. Ranch foreman Jim Bell helped catch a bad guy or two, and in one memorable episode his wife Martha, who was the ranch’s cook, clobbered a gunman with a skillet!

Sky King was a popular radio show starting on ABC as a 15-minute series in 1947, and quickly becoming a half-hour show, alternating weekdays with Jack Armstrong through 1950, then moving to the Mutual Broadcasting System, where it continued until 1954. Future TV newsman Mike Wallace was among those who announced for it and touted Peter Pan Peanut Butter to listeners. The Sky King radio character was played by many actors, including Jack Lester, Roy Engel, Earl Nightingale, and John Reed King.

Sky King came to television in 1951 on NBC, and moved to ABC in 1952, where it finished in 1953. But with 130 episodes filmed, there were enough for frequent re-runs and more recently, boxed videotapes.

Kirby Grant, who played Sky King on television, was born Kirby Grant Hoon Jr. on November 24, 1911, in Butte, Montana. Interested in music and acting from an early age, he was considered a prodigy, and his skill as a violinist and a soloist won him a scholarship to the American Conservatory of Music in Chicago.

While in Chicago, Grant formed a band that performed at local restaurants and night spots. He encountered his first bad guy in Depression-era Chicago, when he and his band were playing in a nightclub. When their time was up, one of a group of men said they were enjoying the group’s music and asked if the band would play a little longer. The band was happy to comply, and afterward, the fellow who had made the request placed a $100 bill in the pocket of each musician. Grant later learned the man’s name was Al Capone.

Upon completing his formal education, Grant began performing on radio, stage, and movies. He did recordings for established stars, including Bing Crosby. Crosby was not good at reading music, so Paramount Studios hired Grant to learn the songs, record them with the studio orchestra, and then teach the songs to “the Crooner.”

The next four years brought appearances in non-westerns such as Mexican Spitfire, Dr. Kildare’s Victory, and Blondie Goes Latin, among others. Grant played a singer in Hello, Frisco, Hello. The only western Grant appeared in during this period was in Johnny Mack Brown’s The Stranger From Pecos (1943). He also had an uncredited appearance as a pilot in Bombardier (1943), a World War II movie starring Pat O’Brien, Randolph Scott, and Richard Martin.

Kirby Grant’s flying career began in a 1929 Waco. During the early 1940s war effort, Grant made repeated attempts to serve his country as an aviator, but his color blindness destroyed those hopes. He ended up in the infantry until 1945. Upon his military discharge, he was placed under contract to Universal Studios. During his career he made at least 50 pictures between Universal, Columbia, and Allied Artists.

He  co-starred with a white dog named Chinook in a Royal Canadian Mounted Police series loosely based on the books of James Oliver Curwood.  The series ended in 1954 with Yukon Vengeance, which ended Grant’s movie career, but television was waiting.

Grant’s agent approached him with the role of Sky King and set up a screen test. Several weeks later he was notified that he had been selected for the part and went to the studio to meet his TV niece, Penny (Gloria Winters) and nephew Clipper (Ron Hagerthy.) They were to live on the Flying Crown Ranch near the fictitious town of Grover, Arizona and fly around in the Songbird. Grant had earlier purchased a 1946 Cessna T-50 Bobcat, which became the first Songbird.


After only eighteen episodes of the series, the project was canceled due to a parting of the ways between sponsor Derby Foods and its advertising agency. Kirby Grant left Universal to join Wilding Studios in Chicago as a writer-director. In early 1955, he was approached by Nabisco, the company wanted to pick up the Sky King series if he would agree to return to the starring role. He agreed, and in the next six months a year’s worth of episodes was produced. 72 episodes were filmed through 1959. They were always filled with excitement and danger, and the flying scenes made the series a hit. It was definitely one of the must-see programs for youngsters on the Saturday morning television lineup.

Grant did as much of the flying as he could get away with in the series, but it seemed the location sets were always visited by insurance representatives. Kirby Grant was a licensed pilot, and it was tough for him to let anyone else do the work. Many of the scenes were filmed around Apple Valley, California. The interior scenes were shot in Los Angeles. The only mishap that occurred during the filming of the series occurred when Grant stopped the Cessna 310B a few feet past the camera and buried the nose gear in a soft spot.

The history of the aircraft used in the television series has a bit of mystery attached. In 1956, Grant sold the original Songbird to a rancher friend for a dollar because it had dry rot in its main spar and his friend wanted a restoration project. Grant replaced it with a new Songbird purchased for $72,000. It was a 1956 Cessna 310B. The last aircraft used was a 1960 Cessna 310D. This plane was only used for promos and not in the actual television show.

The first Songbird apparently never did get restored, and ended up in a barn in Clinton, Missouri. One day the FAA contacted the owner and asked if he still owned the airplane. He told them that he did, and that it was currently in pieces. They informed him that someone was flying around the country to air shows in a Cessna T-50 with the same tail number and claiming that the plane was the original Songbird. That person reportedly soon had his license revoked by the FAA.

The second Songbird, a Cessna 310-B, had a more bizarre story. The file on the aircraft suddenly stopped in 1970. There are reports that it was stolen in 1970 and used to smuggle drugs across the Mexican border, and that its pilot was killed when the aircraft crashed while sneaking into the United States with a load of marijuana. As late as 1981, the El Paso Intelligence Center (EPIC) listed the aircraft as a drug runner and had it on its hot sheet.

Bizarre story? It gets better. George Norvall of General Aviation News, who had written a series of articles on famous airplanes, claims that the plane crashed in 1957, killing the pilot six weeks after filming the stock shots and opening sequence with the new Songbird, and that the wreckage was still locked in a garage in Los Angeles. The widow of the pilot who was flying the plane at the time it had crashed kept the plane all of these years.

Whatever happened to the Songbird, Kirby Grant’s fate is known. When the series ended he moved to Florida, where he spent much of his time in fundraising efforts for cerebral palsy, heart disease research and prevention, and other programs as his way of saying thank you to the public who made him successful. In 1978, Kirby Grant suffered a massive heart attack, resulting in a triple bypass and a new valve, but soon he was on the mend.

Following his heart attack, the FAA suspended his pilot’s license. Grant worked with Sea World and the Florida Festival in its public relations department and was the Daytona Air Fair’s Grand Marshal. Kirby also was an announcer with the Great American Air Shows. He tried his hand at real estate development, and there was talk in the 1970’s of reviving Sky King and plans on opening a Sky King theme park. The project never happened. Grant was always cordial and friendly, sometimes surprising his fans at film conventions by proving to have a fine singing voice.

On October 30, 1985, Kirby Grant was driving to Cape Canaveral, Florida to watch a launch of the Space Shuttle Challenger. He was to be honored by the shuttle astronauts for his achievements in encouraging aviation and space flight.

Grant, 74, was traveling east on State Route 50 near Titusville, about 8 a.m. He attempted to pass a slow moving car ahead of him when that car also pulled to the left to pass a vehicle in front of it. Grant swung to the right, overcorrected, and slammed into a ditch filled with at least three feet of water. The former actor was thrown from his car and seriously injured. Passing motorists stopped to render assistance, but it would do no good. Kirby Grant Hoon, Jr., television’s beloved Sky King, was dead. He is buried in the Missoula Cemetery in Missoula, Montana. His simple headstone makes no mention of his long acting career, inscribed instead with just his name, the years of his birth and death, and a single musical note, perhaps to symbolize his return to his roots, not only in Montana, but as the musician he started out to be. 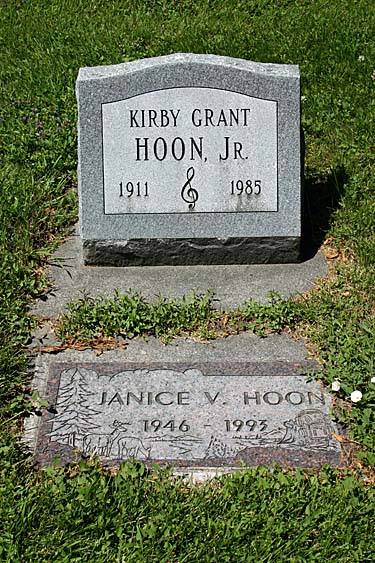 Kirby Grant may be gone, but the legacy of Sky King lives on. He touched the lives of those who watched his show, sparked an interest in flight in a generation of young Americans, and taught us that good guys always prevail, sometimes with the help of a good airplane and a pretty blond girl at their side.

Thought For The Day – An expectation is a resentment waiting to happen.