Some come alone, others bring their families, and some arrive in small groups. They come for many reasons. For some it is a place to remember. For others it is a place to heal. For everybody who comes here, it is a place to pay respect to those who made the ultimate sacrifice to their country.


The Kentucky Vietnam Veterans Memorial is one of the most moving tributes to fallen heroes that we have ever seen. Located on a small hill with a view of the Kentucky River and State Capitol building, the memorial was conceived to be a place of contemplation and quiet meditation, a place to reflect upon the nature of the Vietnam War and those who served in it.

The memorial was designed as a large sundial. On the face of the granite dial are the names of the 1,069 Kentucky servicemen killed during the war or listed as missing in action or prisoners of war at the time of the memorial’s dedication. Each hour line of the sundial represents a year of American involvement during the war. The length of the shadow of the sundial’s 25-foot stainless steel pointer (called a gnomon) varies with the season of the year, with the longest shadows at the winter solstice on December 21, and the shortest at the summer solstice, on June 21. 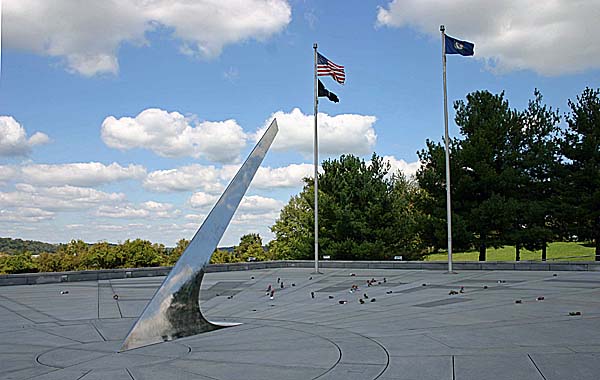 As the sun moves across the sky, the shadow of the tip of the gnomon points to and covers the name of the dead on the anniversary of their death, ensuring that each fallen Kentuckian is honored with a personal Memorial Day every year. The shadow never crosses the names of the missing in action, representing America’s resolve never to forget, and the hope that their fate may someday become known.

The arrangement of the names was intended to demonstrate a visual pattern of Kentucky casualties during the Vietnam War. The first two deaths occurred in 1962 and the last Kentuckian was killed during the American evacuation in 1975. The year of heaviest losses was 1968, which falls between noon and 1 p.m. Eastern Standard Time. Veterans Day is commemorated with an inscription located on the plaza, where the gnomon’s shadow falls on November 11, at 11:11 a.m. Eastern Standard Time, the date and time which marked the Armistice in 1918, officially ending the First World War. A passage from the Bible’s Book of Ecclesiastes is inscribed on the granite dial: “A Time To Be Born, And A Time To Die…..”

Each year Memorial Day and Veterans Day ceremonies are held at the memorial, as is the annual Rolling Thunder motorcycle rally of veterans in the “Run For The Wall.” Whether you come to the Kentucky Vietnam Veterans Memorial alone, or as part of a ceremony to honor our veterans, I guarantee that you will feel the power of this special place.


The memorial is located on Coffee Tree Road, just off State Route 676 on the south side of Frankfort. GPS coordinates at the memorial are: N 38o 10.634 W 084o 51.861. The parking lot will accommodate passenger cars and trucks, and a small Class C could get in and out with little problem if it is not very busy, but if you travel in a larger RV, it is best to park elsewhere and drive your dinghy or tow vehicle.

Thought For The Day – The stupid neither forgive nor forget; the naïve forgive and forget; the wise forgive but do not forget. – Thomas Szasz