Nick's Blog » Out With The Old, In With The New

I had a secretary once who used to tell me I was an old stick in the mud because I wasn’t always quick to embrace new ideas and changes. Not that I wouldn’t consider them, but I’ve always felt that if something works, why mess with it?


The baseball cap I wear on a regular basis is a good example. It depicts an Army UH-1 Huey helicopter, an aircraft I became very familiar with during my time in the military serving with the 1st Cavalry Division. Even though the name said Cavalry, we were an Airmobile division and traveled in helicopters instead of on horses.

This is the second of these hats that I have had, and as you can see, after about five years of almost daily wear it is worn out. 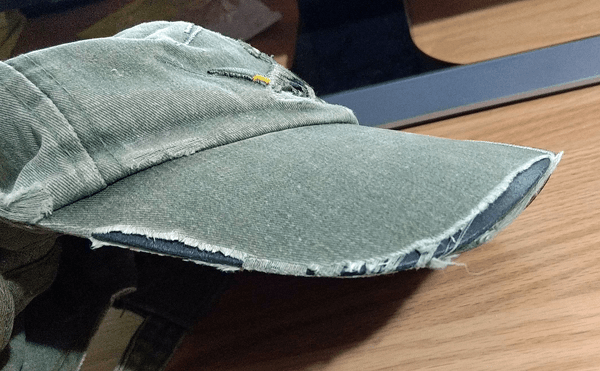 Fortunately for me, when I find something I like that isn’t available at my local stores I sometimes stock up. So I had an identical hat waiting and all I had to do is transfer my jump wings from the old hat to the new. 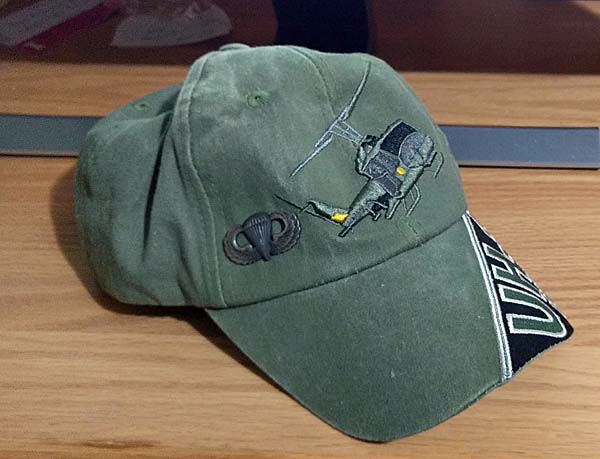 Terry told me that I should order a replacement hat for the day when the new one wears out. At my age, I think there’s a pretty good chance I’ll be ready for the trash heap before the hat is, but what the heck, it never hurts to have a spare. But when I logged onto Amazon to buy another one, I was shocked to see that they were $48 each. Terry said it didn’t matter, if I wanted one, to order it. No, I don’t want one that bad.

Then I tried Sporty’s Pilot Shop, where I found the same hat for only $24. Okay, it’s a well-made hat, and like I said, the last one lasted five years, so I was going to order a backup hat. But Terry encouraged me to buy three of them. So now, with four brand-new hats, assuming each lasts as long as my previous ones did, I think I’ll be gone before I get to the bottom of the stack. But that’s okay; between a nice old pickup truck, a brand-new pontoon boat, a couple of kayaks, a gun or two, and at least one or two very nice hats left over, Miss Terry will have a heck of a dowry if she ever wants to replace me.

Okay, enough of that, let’s talk lizards. I know people who won’t come to Florida because they are afraid of bugs. I know people who stay away from our adopted state because they’re afraid of alligators, or snakes, or sharks. Yeah, we have them all. But except for the mosquitoes, most of our adopted state’s critters will leave you alone if you leave them alone. But nobody ever tells you about the lizards. The damn things are everywhere!

We have them in the little flower bed at the front of our house, we have them on our driveway, they crawl up the outside walls, and as you can see from this picture, they get on our car tires. Here a lizard, there a lizard, everywhere a lizard. 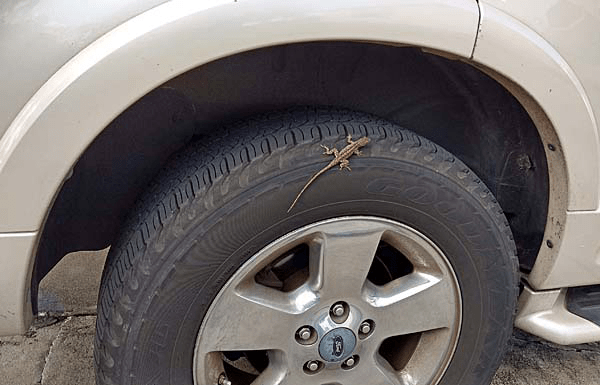 Maybe they think I like them because I wrote a book called The Gecko In The Corner. For the record, I don’t. I’m okay with them outside, because that’s where wild critters belong. But all too often one sneaks inside. I know they are small. I know they’re harmless. But it still doesn’t keep me from screaming like a little girl when I see one in the house.

Terry keeps telling me it’s a good thing to have them in the house because they eat mosquitoes and other bugs. First of all, if that was true we wouldn’t have so many mosquitoes around here. And second, I’m not all that wild about a trade-off that says instead of having a tiny little mosquito or fly in my house, I have a six inch long lizard. That is just not acceptable. And if they are going to live in my house, the least they could do is chip in a little bit to help with the mortgage payment and electricity bill. Fair is fair, right?

Congratulations Paul Sansaver, winner of our drawing for an RV camping journal donated by Barbara House. We had 94 entries this time around. Stay tuned, a new contest starts soon.

3 Responses to “Out With The Old, In With The New”