Our little town of Edgewater and neighboring New Smyrna Beach on Florida’s Atlantic Coast are friendly communities with a lot of small town charm and atmosphere to them. And except for a very few “problem citizens” almost everyone we have met have been wonderful people. However, if local folklore is to be believed, it wasn’t always that way. Many people claim that back in the “good old days” New Smyrna Beach was a haven for gangsters who came down here to escape the cold winter months up north.


I guess it stands to reason that even if you are in the Mafia you could appreciate a break from the long, dreary winters of New York and Chicago and places like that and enjoy relaxing in the sun in a laid back little beachside community.

Two residences in New Smyrna Beach supposedly have ties to mobsters, and though there is no hard proof that either story is true, a lot of people who have been around here for a lot longer than we have swear by them.

This house, on Atlantic Avenue with an outstanding view of the beach, stands next to a huge condominium built much later. It is often referred to as the Mafia house. Built in 1969 by a man named John Maeder, who supposedly had ties to the Sicilian Mafia, some have described the house as a fortress, with armor-plated doors and bulletproof glass in the windows. There were reports that there were gun turrets on the home’s roof, and that it included an underground shooting range. One person, who said he was in the house once to do repairs for Meader, told people that the uppermost room held two tripod-mounted .30 machineguns, one aimed toward the beach and the other inland. 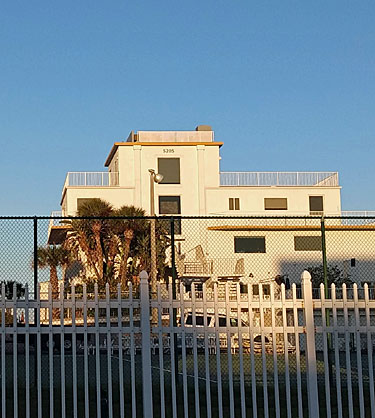 Not much is known about Maeder, but he was said to be a man who kept to himself and valued his privacy, erecting a chain-link fence around the property and plastering No Trespassing signs everywhere. He didn’t live in the house long; in April, 1970, his body was found next to an overturned tractor and the official story was that he was killed when the machine toppled down a slope on his property. But while the police investigation said there was no foul play and his death was ruled an accident, nobody can explain the pistol found next to Maeder’s body or the three spent shell casings located nearby.

The other New Smyrna Beach home with reputed Mafia ties is located on picturesque South Riverside Drive. The stately brick home was rumored to have once belonged to Chicago gangster Al Capone, and that one of his mistresses lived there. People who supposedly know claimed the house was used to store bootleg whiskey and had a secret passageway to Gabordy Canal, which runs alongside the property, making it easy for Capone and his henchmen to come and go unnoticed, and to smuggle contraband in and out.


Built in 1926, the house, which is located in an upscale neighborhood of handsome homes, stands out for its beautiful architecture and the sculptures in the yard. It has a 720 square foot basement, something seldom seen in Florida homes. If the stories of bootleg booze are true, there would be plenty of room to store it down there. 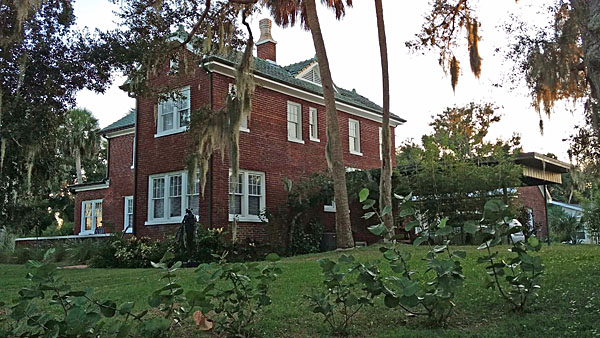 Supposedly, back during the Prohibition days Capone and his cronies would gather at the house to play cards and hang out, away from the limelight and the curious eyes of reporters and the police. Some also believe that gangsters on the lam hid out there until the heat cooled off and they could show their faces again.

There is no proof that John Maeder, who built the Mafia house, had any ties to organized crime or any criminal activity. And while Al Capone did have a mansion in Miami Beach, where he died in 1947 after being released from federal prison, there is no evidence that he actually did own the house in New Smyrna Beach. Real estate records do not show his name anywhere associated with the property, but that’s not to say he didn’t put it in his mistress’ name. Nobody knows for sure. So is either story true, or are these just small-town myths? Don’t ask me, I’m new here. But they do make for some interesting speculation, don’t they?

Congratulations Terri Lou Boucher, winner of our drawing for an Amazon Kindle e-book reader. We had 266 entries this time around. Stay tuned, a new contest starts soon.

Thought For The Day – Mr. Rogers did not adequately prepare me for the people in my neighborhood.

One Response to “Our Mobster Neighbors”