A while back I wrote a blog post about a visit to my doctor and them giving me a chart with a food pyramid on it. I said then that the problem with that was that everything I like is on the wrong side of the pyramid, and the stuff I don’t like is what they recommend. What kind of fun is that?


You might not believe it for a guy as fat as I am, but I’m actually a very picky eater. You might think that makes me hard to cook for but is actually very easy; I eat fried dead meat. But I’m also just as happy to have grilled dead meat, baked dead meat, or roasted dead meat. Basically, if it’s meat and it’s dead, I will eat it.

And don’t worry about vegetables and side dishes and things like that. You’re wasting my time and yours. Outside of a very few exceptions, I don’t eat vegetables. Nope, don’t want them, not going to eat them. Part of that is because I’m finicky and part of it is because I’m terribly allergic to onions, which are vegetables. The way I see it, it’s kind of a family feud thing. If your cousin hurts me, I don’t like you, either. It’s one of those guilt by association things.

I will make an exception for things like potatoes, since you can make French fries from them, and Miss Terry makes me eat at least a serving of corn or peas with most meals. Okay, I can handle that, but let’s not get all crazy and start throwing broccoli or Brussels sprouts or anything like that in my direction.

And I’m not one for exotic food. Sushi? Never going to happen. Fried rice is about as exotic as I get.

Over the years we’ve seen some oddball things on restaurant menus and store shelves, and I wonder if anybody ever actually tries them. For example, when we were at Jungle Jim’s, a huge grocery store in the Cincinnati area that stocks foods from all over the world, we saw Spotted Dick sponge pudding. Seriously, who would eat that stuff? 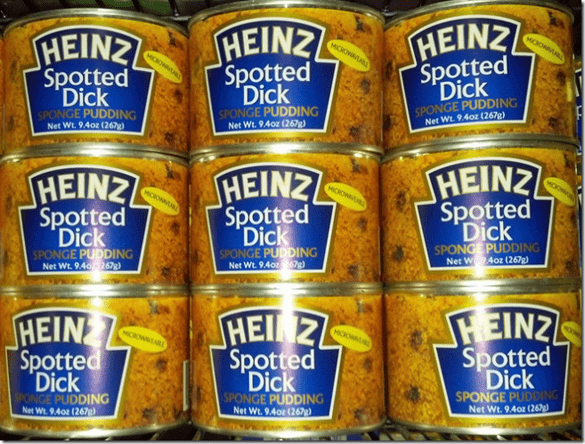 The other night a friend of mine sent me a picture of a store shelf displaying cans of pork brains with milk gravy. When I said that thing above about if it’s meat and it’s dead I will eat it, I have to draw the line somewhere, and that seems like a good place to do it. 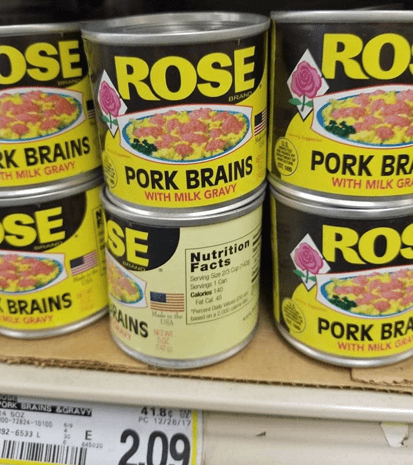 Obviously, this all presents challenges for Miss Terry, because she’s the world’s greatest cook and she loves trying new things. That’s fine, baby, just don’t try them out on me. Right now, Terry is adjusting to something called the Fodmap diet, which her doctor recommended to see if it would help her with her IBS. She is not nearly as picky as I am when it comes to food, but so far, she’s not a big fan. Not because of the foods it recommends, but rather because of all the good stuff she loves that it says she should not be eating. Why is it that everything we love is either fattening, illegal, or immoral?


Moving away from food for a moment (which is about as far away as I ever want to get from food), while it may be hard to believe it here in Florida where temperatures are in the upper 80s, winter is coming. My daughter Tiffany had snow at her place in Show Low, Arizona yesterday. Bundle up, kid, I think you’ll see a lot more of it before Spring.

Congratulations Steven Tiefel, winner of our drawing for an audiobook of Big Lake Blizzard, the fourth book in my Big Lake mystery series. We had 74 entries this time around. Stay tuned, a new contest starts soon.

Thought For The Day – I played hide and seek today. I was winning, too, until the cops let the K9 off its leash!

One Response to “No, Thanks. I’m Good”