Note: This story is from my book Highway History And Back Road Mystery II, available on Amazon.

In the charming little town of Point Pleasant, West Virginia, located on the bank of the wide Ohio River, we discovered the story of pioneer heroine Ann Bailey, whose life and adventures have become a part of the folklore of the region.


Born Anne Hennis in Liverpool, England, around 1742, Anne was orphaned as a teenager and came to America to live with an uncle’s family that had settled near Staunton, in the wild Shenandoah Valley of Virginia. She married a settler named Richard Trotter in 1765 and the couple had one son, whom they named William.

Richard Trotter was killed at the Battle of Point Pleasant on October 10, 1774, when militia troops commanded by Lord Dunmore were ambushed by Indians lead by the Shawnee war chief Cornstalk.

Her husband’s death had a profound effect on Anne and changed her life forever. She soon left her son with friends and set out to avenge Richard Trotter’s death. Anne became a skilled frontier scout and hunter, as capable as any frontiersman of the time. Armed with a hatchet, knife, and long rifle, she dressed in men’s buckskins and roamed from settlement to settlement, carrying messages, urging men to join the militia to fight the British and their Indian allies, and helping seek out roaming Indian war parties. Anne was well liked and respected by everyone who knew her and was welcomed in the cabins of settlers everywhere she went.

In 1785, Anne married John Bailey, who was a scout and Indian fighter. They moved to Clendenin’s Settlement (present day Charleston, West Virginia) in the Great Kanawha Valley, where Anne won her place in history during the siege of a frontier stockade called Fort Lee. Under attack by a large force of Indians, and with their supply of ammunition running low, things looked grim for the fort’s defenders and the settlers who had taken refuge inside.

Mounting a sturdy black horse, Anne made a mad dash through the Indians surrounding the fort, unmindful of the arrows and musket balls that flew past her. She rode 100 miles across wild territory to Fort Savannah (present day Lewisburg, West Virginia) and secured a supply of gunpowder, then rode back through the Indians again to deliver it to Fort Lee. Anne’s feat was commemorated in Charles Robb’s epic 1861 poem titled “Anne Bailey’s Ride.”

Anne was known forever after as the Heroine of the Kanawha Valley. As a reward for her courageous actions, the settlers at Fort Lee gave Anne the horse she had ridden in her wild adventure. She named the steed Liverpool, after her hometown back in England, and rode him for many years.

She was a bit of an oddity on the frontier and became known as Mad Anne Bailey for her exploits. There are many stories about Anne Bailey, many of them exaggerated, and some of which she no doubt spread herself, since she was known as a popular storyteller. One tale has her being chased by an Indian war party. When she came to a dense thicket, Anne jumped down from her horse and hid inside of a hollow log to escape. The warriors grabbed Liverpool’s reins, then tried to find Ann’s hiding place without success. Eventually tiring, they sat down to rest on the same log that Anne was hiding inside of.

She waited quietly until the Indians had moved on, and then followed their trail on foot. Under cover of darkness, while the Indians slept, Anne crept into their camp, untied Liverpool and led him away. When she was safely out of rifle range, she mounted her horse, woke the Indians with a wild shout of defiance, and then rode away.

Not all of Anne’s achievements involved warfare. She is credited with bringing both the first pair of geese and the first copper whiskey still into the Kanawha Valley. With the end of the Revolutionary War and with the Indians finally subdued, life on the frontier became somewhat safer, though it was never easy. The Bailey’s settled down near present-day Charleston, where they lived until John Bailey’s death, in 1802.


Twice widowed, Anne then made her home with her son William and his family at Point Pleasant but spent much of her time traveling throughout the region as a messenger, trader, and storyteller. For several years Anne was employed as a mail carrier and express messenger, carrying letters between Point Pleasant, Lewisburg, and Staunton. In 1817, William sold his farm and moved across the river to Gallia County, Ohio, and Anne went along. After a lifetime of danger and adventure, the brave frontierswoman, who was fearless in the face of Indian attacks and British troops, died peacefully in her sleep, on November 22, 1825.

Anne was originally buried in Ohio, but in 1901 her remains were moved to Tu-Endie-Wei Park in Point Pleasant, West Virginia. The park includes a monument to the militiamen who died at the Battle of Point Pleasant in 1774. Anne’s headstone, on which her name is misspelled, has a plaque telling of some of her exploits on the frontier. 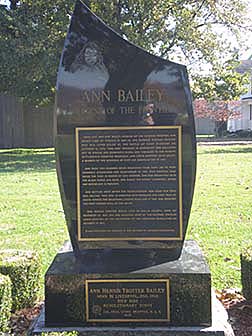 Anne Bailey has been gone for almost 200 years, but her memory lives on still today. Several locations in West Virginia bear Anne Bailey’s name, including a school, a park, and a lookout tower in Watoga State Park.

Congratulations Dave Rodgers, winner of our drawing for an audiobook of Hands of Onyx, book 2 in the Sav’ine series by Stacy Bender. We had 19 entries this time around. Stay tuned, a new contest starts soon.

Thought For The Day – Common sense can cure ignorance, but there is no cure for stupidity!

One Response to ““Mad” Anne Bailey”