Miss Terry had a doctor’s appointment early Monday afternoon and we thought we would pop into the library in New Smyrna Beach on the way and vote early. As it turned out, about half of Volusia County had the same idea. The place was packed and a double line snaked up and down the hallway. We knew there was no way we would be out of there before her appointment, so we decided to go back yesterday.


This time around it wasn’t too bad, about a 45-minute wait. Because the wording on the ballots can be very confusing, we got sample ballots in the mail and spent time researching the various amendments and marking them on the sample ballots ahead of time to make it quicker and easier when we did get to the voting booth.

I’m really pleased to see so many citizens getting out and voting this year. No matter what your party affiliation is, or if you’re an independent like we are, get out and vote. And if you don’t, you have no right to complain about the results of the election, no matter how it goes. Here is Miss Terry proudly posing with her I Voted sticker. 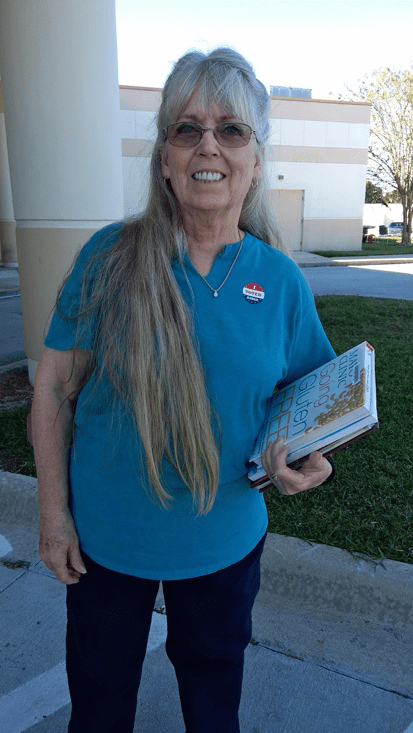 Afterwards we did some browsing at a local antique mall, which is always fun for us. Except for a used copy of Tom Brokaw’s book The Greatest Generation Speaks, I didn’t find anything I liked enough to bring home with me. Terry was kind of captivated by this broom with its elaborately shaped stick. This being Halloween, I wasn’t sure if she was going to put it in the car for the trip home or just fly it and get a feel for how was. As it turned out, she didn’t do either and it’s still there. 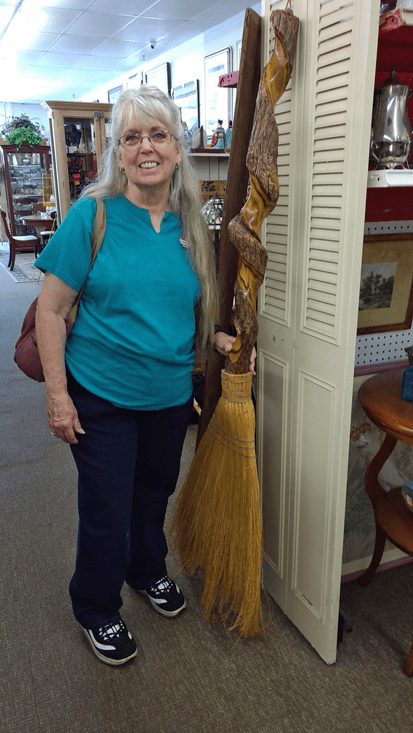 I have a question for my readers. Has anyone here had a spinal pain block injection or a nerve ablation for back pain? If so, what were the results? Would you do it again?

As most of you know, a while back I decided to try medical marijuana for the intense back pain I’ve been living with for years, which has gotten much more severe in the last several months. At first it worked great and lasted for about six weeks. I felt like a new man and could move around without pain, didn’t need a cane to get around, was off the opioid pain meds, and could sleep through the night in bed instead of sleeping fitfully, sitting up in recliner.
But when I ran out of that particular extract, the folks at the local dispensary sold me something that they said was exactly the same. It wasn’t, and I wrote about that in a blog post titled Fun And Not So Fun. Not being able to tolerate their products, I needed to find Plan B.

Later Monday afternoon we had an appointment with our marijuana “primary care doctor” and he agreed with us that the dispensary in Edgewater leaves a lot to be desired. He wrote me specific orders for what he said would help me at a different dispensary Surterra Wellness Center in Port Orange. This included some oil that goes under the tongue sublingually, and patches that you place on the skin for up to 12 hours. So far I haven’t seen any relief from them, but hopefully they will kick in and do me some good. But since two doctors have told me I’m not a good candidate for back surgery, I’m looking at other options.

Of course, losing about 100 pounds would help, too. It’s been a long time since I’ve been able to walk on the treadmill because of the pain, but the last few days I’m back at it and doing about a mile a day. Don’t you wish fat came off as easily as it went on? I know I sure do!


And finally, with 33 books out, I’ve been an author long enough that I don’t get bent out of shape by a bad review. They happen. Not everybody’s going to like something just because I wrote it, and that’s okay, too. But sometimes when I read a review I shake my head and think “Really?” I got a 3 star review (not that 3 stars is all that bad) for Strawberry Slugbug that said “unbelievable that all the serial killers come to that town.” Do they not understand that this is fiction? Do they watch police dramas on TV and think real cops get in that many shootouts? Or that doctors on medical dramas save lives miraculously at the last minute whenever the Grim Reaper shows up in the ER looking for souls to collect?

Thought For The Day – If your identical twin got plastic surgery, it would be hard not to feel a little insulted.

8 Responses to “Ballots And Broomsticks”