They say timing is everything, and I think they’re right. Think about how different your life would be today if you had turned right instead of left twenty years ago. Or taken a moment or two to chat with your neighbor across the hedge before you got in your car to go to work. What calamity did you avoid by that simple action? Or what opportunity did you miss out on?


I remember once a brother-in-law had a brand-new Oldsmobile convertible that he drove by the house to show me. We chatted for 15 minutes or so while I admired the car and then he left. A block away, an elderly lady ran a stop sign and T-boned him, totaling his brand-new car. What if he would have hung around another minute or two before he left? Would she have been through that intersection when he got there, avoiding the accident entirely? Sometimes I think about things like that.

Emails like that aren’t the only ones that I get, of course. Sometimes I get ones that surprise me by the questions that people ask that leave me wondering just where they’re coming from. For example, a woman emailed me yesterday saying that her and her husband want to take their kids and go fulltiming, but since two of her children were with her first husband, with whom she holds joint custody, they are having problems getting his permission to do so. She asked me if I knew what would happen if they just packed up and left. Yeah, I know what’s going to happen. You’re probably going to get charged with custodial interference, at the very least. Maybe even kidnapping, and jail time is likely. I would think long and hard before I did something like that.

One of the funniest emails I received recently was from a couple who said they were at a campground in Pennsylvania when the man parked across from them came over and demanded that they move to another site because he had a friend coming and he wanted them to park there. The fellow said he would have been okay with that if the man would have been at least friendly, but instead he told him he had exactly 15 minutes to clear out of that site because his friend was on his way. Given that, he decided that no, he wasn’t going to move unless park management ordered him to do so. A while later an RV pulled up in front of the site and the neighbor comes out to talk to the driver, glaring at the person who wouldn’t move. Eventually the RV moved on and parked somewhere else.

The person writing me said that later that evening he was walking his dog when he passed by the site where the other person had gone to park. The man was out in the yard so he stopped and said hello, and apologized for not moving, saying that looking back on it, he had been stubborn when there was really no need for it. The other person told him, “Oh, no. I saw you with your dog and I was walking out to thank you for being so damn stubborn. I have to put up with Bob at work but I sure don’t want to have to look at his ugly face across the campsite every morning on the weekend!”


And finally, here’s another chuckle to start your day from the collection of funny signs we see in our travels and that our readers share with us. 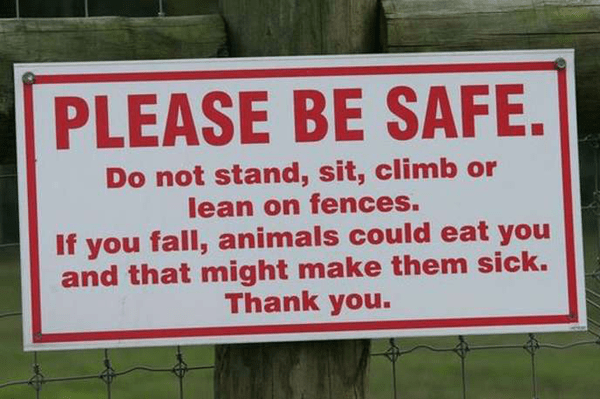 Thought For The Day – People are all concerned about the important issues of the day and I’m sitting here wondering how many burps are in a case of beer.