We have all heard the stories about how the children of celebrities often cannot seem to adapt to life, all too often falling victim to alcohol or drug abuse while living in (and trying to live up to) the shadow of their famous parents. Unfortunately, this is not a new phenomenon, as the tragic story of Frederick William Stowe illustrates.


Born in 1840, the second son of minister and college professor Calvin Stowe and his wife, the famous author Harriet Beecher Stowe of Uncle Tom’s Cabin fame, Frederick was a troubled child who grew to be a troubled teenager. When he was 16 years old his parents sent him to a treatment facility in Elmira, New York, hoping to cure his alcoholism.

When he left the treatment facility he spent some time touring Europe, then returned to the United States and enrolled at Harvard Medical School. A mediocre student at best, Frederick spent more time drinking and partying than he did in a classroom, sometimes on the verge of expulsion.

In 1861 he left Harvard to enroll in the Union Army, assigned to Company A of the 1st Massachusetts Volunteer Infantry, with the rank of sergeant. He fought at the First Battle of Bull Run on July 21, 1861. It was the first major battle of the Civil War and resulted in a Confederate victory. In January, 1862, he was commissioned a lieutenant and assigned to the 1st Massachusetts Heavy Artillery. 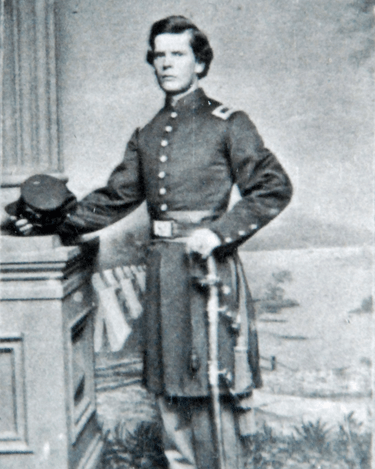 The unit was stationed close to Washington DC, and Harriet Beecher Stowe, afraid her son would give in to the temptations of city life, used her connections instead to get him an assignment as a captain on the staff of a longtime family friend, General Adolph von Steinwehr. She hoped this would keep him out of combat and also away from the lure of alcohol. That didn’t work out well because in July 1, 1863, it seemed like the entire Union Army moved to Gettysburg, Pennsylvania for the epic clash with rebel forces that took place there. During a Confederate artillery barrage on Cemetery Hill, Stowe was hit by shrapnel and suffered a head wound. He was treated at a field hospital at Gettysburg, and then released from the Army.

Even in those days, opiates were a danger to medical patients, who often became dependent on them. But back then most physicians didn’t recognize that and distributed them freely to help their patients deal with pain. It didn’t take Frederick long to become addicted.

Back at the family home in Hartford, Connecticut after the war, he resumed drinking and soon it was having a major impact on the Stowe family life. His mother had acquired a citrus plantation in Florida after the war, and hoping to dry him out, while at the same time giving him an opportunity to prove himself, she sent her son there to oversee the operation. The experiment was a failure, and in 1867 Frederick was back in another treatment program for his alcoholism. Unfortunately, like other attempts in the past, this one was a failure as well.

Determined to separate himself from his family to avoid causing them any more scandal, in the summer of 1870, Frederick boarded a ship bound for California. What happened to him after that is a mystery that remains unsolved. His mother got one or two short letters from him in which he indicated he might sign on as a crewman on a ship and go to sea, but then he was never heard from again.


What happened to Frederick William Stowe? Did he indeed become a common sailor and maybe perished somehow and was buried at sea? Did he finally find peace on some beautiful South Sea Island where his family name was unknown and settled into domestic bliss with an island girl? Or, did he resume drinking and die alone in some San Francisco alley or a dilapidated boarding house? In those days, the waterfront in any port city was a dangerous place to be, populated by thieves, ruffians, and murderers. Could Frederick have fallen victim to someone like that? Could he have taken his own life out of despair?

Though his mother funded several investigations to try to discover the truth about what happened to her son, there were no answers, and there are still none today. The son of the famous abolitionist author died somewhere in obscurity, but nobody knows when or where.

Today is your last chance to enter this week’s Free Drawing for a one year subscription to www.OvernightRVParking.com. This is a great resource for RVers, listing well over 13,000 free places where you can park overnight. It’s a $24.95 value and it could be yours free if you’re our lucky winner. To enter, all you have to do is click on this Free Drawing link or the tab at the top of this page and enter your name in the comments section at the bottom of that page (not this one). Only one entry per person per drawing please, and you must enter with your real name. To prevent spam or multiple entries, the names of cartoon or movie characters are not allowed. The winner will be drawn this evening.

Thought For The Day – I looked up my family tree and found three dogs using it.

One Response to “The Tragic Life of Frederick Stowe”