History is written by the victors, and unfortunately, we Americans have not always been the nicest people in the world. Evidence of that is in the movies and television shows of my childhood, which portrayed Indians, whom we now call Native Americans, as ruthless savages who spent their time raiding settlers’ isolated cabins and ambushing hapless wagon trains, until the “good guys” in the form of the U.S. Cavalry rode to the rescue in the nick of time, with bugles playing and sabers flashing.


In truth, these native peoples were defending their homeland from an invading horde who descended upon them, broke every treaty made with them, and in quick time destroyed their world and their culture.

The Indian tribes that resisted the influx of these newcomers with violence met with overpowering opposition from the United States Army, whose superior firepower beat them into submission. Those who tried to compromise, by way of treaties and moving onto government appointed reservations, quickly learned that the promises made by Washington to provide for their needs on those reservations were broken before the ink was even dry on the treaties they signed.

Not content to force the Indians off their traditional lands and onto substandard reservations, the next step was to destroy their traditional way of life by introducing them to the White man’s ways and forcing them to assimilate into our culture. One of the primary ways to do so was to establish Indian schools, where Native American children were brought to “civilize” them.

More than 100,000 Indian children attended some 500 boarding schools that were established to accomplish this mission. The children were forbidden to wear their hair long, to dress in their traditional clothing, practice their religious beliefs, or even to speak their native languages. They were even forced to accept Anglo names to further separate them from their identities as Indians.

The first, and probably the most infamous of these, was the Carlisle Indian School in the Pennsylvania community of the same name. Today a cemetery at the former school holds the graves of Indian children who were torn from their homes and families and brought to Carlisle, where many died of diseases unknown to their former lives, and to which they had no immunity. 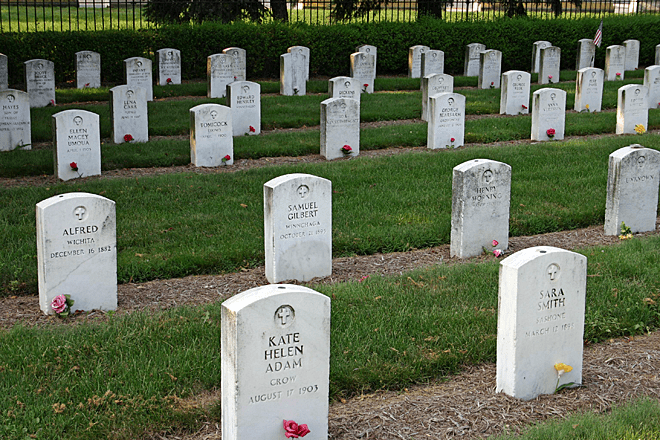 Perhaps not as disruptive to the Indians’ traditional lifestyle were the missions established on the frontier to help the Indians assimilate into White culture. At least here the Indian children were close to home and family.

One such school is known today as the Iowa and Sac & Fox Mission State Historic Site, near Highland, Kansas. The school here was established by the Presbyterian Church in 1837 to educate Iowa and Sac and Fox Indian children. Originally Great Lakes tribes, these native peoples were forced to emigrate to reservations in Kansas in the 1800s, adapting their traditional Woodlands cultures to the rolling prairie landscape. 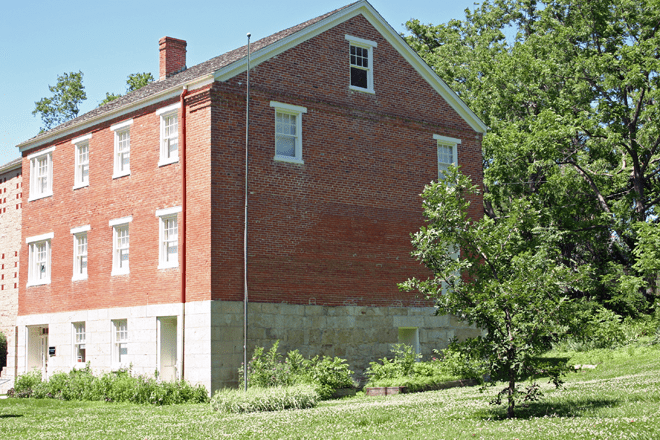 Like so much that happened in our dealings with the Indians, though the decision to build the mission was made by the Presbyterian Church at the urging of the United States government, most of the construction costs were funded by appropriating tribal annuity monies that were supposed to be paid to help them survive on the reservations until they could establish farms and become self-sufficient.

At least life was easier on Indian children educated at the mission than it was for their counterparts who were forced into the boarding schools far from their families. The mission was adjacent to the reservation, and lessons were taught in English and the Iowa language. Lessons included spelling, arithmetic, and geography, but emphasis was placed on the industrial and domestic arts, and farming. By 1856, the mission had 44 students. Half were Iowas, and the rest were from the Sac, Fox, Blackfoot, Sioux, and Pawnee tribes. Many of the students were orphans.

The Presbyterians realized the advantage of teaching Indian children to read and write in their own languages and felt that a gradual introduction to English was more effective than the forced total immersion to Anglo ways used in many of the boarding schools.

This was one of many Indian missions scattered across the West, and the missionaries’ motives varied. Many honestly believed that their work was in the best interests of the Indians. Unfortunately, others shared the popular opinion that the Indians were an inferior race that needed to either change or disappear.


Emigrant and freight traffic passed the mission on the St. Joseph branch of the Oregon-California Trail, and for a time the Indians were able to profit from this traffic. They built a log bridge across Wolf Creek, near the mission, and charged a toll, usually twenty-five or fifty cents a wagon.

But, as happened with the Indian children sent to the boarding schools, exposure to the White man meant exposure to his diseases. Cholera and smallpox broke out among the Indians, claiming many tribal members. The Indians who survived these epidemics shunned contact with white emigrants and the missionaries, fearing that more disease would follow.

Even though the Indians’ original treaty, agreed to in 1836, promised them their reservation lands “so long as the grass on the prairie shall grow,” that was not to be. In 1854 a new treaty was negotiated, causing a reduction of Indian lands, and settlers moved into the region, pushing the Indians further west. This left the mission too far removed from the reservation to serve the Indians, and the decision was made to close it in 1863. For the next three years the mission functioned as the Indian Orphanage Institute, before it closed completely in 1866.

Over time, part of the original mission building was dismantled, and in 1937 the Northeast Kansas Historical Society organized to preserve the remaining portion of the building, which had been used as a residence until about 1905. It became the property of the state in 1941, and since 1963 the Kansas Historical Society has administered the property as a state historic site.

The Iowa and Sac & Fox Mission State Historic Site is located at 1737 Elgin Road, one mile north of U.S. 36, and three miles east of Highland, Kansas. The buildings are no longer open to visitors, but the grounds open daily from dawn to dusk. There is no admission fee. Parking may be limited for larger RVs. For more information, call (785) 272-8681.

Thought For The Day – Sorry, I’m in a hurry. Let’s talk while we walk. You go that way.