Sometimes we go out in search of one story, and stumble upon another one we never expected to find. So it was with the story of Old Rip, which we discovered in Eastland, Texas.

It all began back in 1897, when the good people of Eastland were laying the foundation for a brand new courthouse. It was decided to place a time capsule in the cornerstone, to be recovered at some distant date. A Bible, the current edition of the newspaper, some trinkets, and a bottle of whiskey were placed inside the time capsule. At the last minute, a local man dropped in a horned toad that he had captured. Today animal rights activists would have stepped in to save the creature from being entombed in such a way, but this was a different time, and the cornerstone was sealed with the unfortunate toad inside.


Time passed, as it always does, and 31 years later, in February, 1928, the courthouse was in disrepair and scheduled for destruction. In those days, there weren’t many diversions in a small community like Eastland, so most of the town’s citizens turned out to see the time capsule opened.

According to witness accounts of the time, somebody pulled out the flat, shriveled carcass of the horned toad and set it aside. But all attention was quickly focused back on it when somebody exclaimed “It’s alive!”

As unbelievable as it sounds, they said the horned toad started to twitch and twitter as the sunlight hit it, and then it began to hop about. Skeptics said it was impossible, but the people who were there swore it was true, and quickly dubbed the miraculous animal Old Rip, after literary figure Rip Van Winkle, who sat down to take a nap one day, and woke up twenty years later.

Old Rip became a national sensation, and an instant celebrity. Newspaper reporters and curiosity seekers rushed to Eastland to see this amazing animal. He was taken on a tour of the nation, and even went to Washington, D.C. to meet President Calvin Coolidge.

Apparently, life as a celebrity was much harder on Old Rip than the years he spent buried alive in solitude, and on January 19, 1929, he died. When you have a famous horned toad like Old Rip, you don’t just throw him in the trash, or bury him in the back yard. Eastland’s citizens were not willing to just forget their newfound mascot, so they had him embalmed and placed him in a velvet-lined box, which was displayed in the courthouse lobby for all to see.

You might think that this would be the end of the story but you can’t keep a good toad down, and Old Rip’s adventures weren’t over yet. In 1962, John Connally was campaigning for Governor of Texas, and on a stop in Eastland, he posed for reporters holding the body of Old Rip. Well, he did until a leg broke off in his hand and the rest of the famous horned toad hit the marble floor of the courthouse lobby. Apparently, the gaffe didn’t hurt Connally’s political ambitions, because he went on to win the election.

And still, the story of Old Rip wasn’t over! In 1973, persons unknown kidnapped him from the courthouse lobby and a small ransom was demanded for his return. Not willing to give in to criminals and terrorists, County officials ignored the ransom demand, and a few days later an anonymous tip said that Old Rip could be found in his display box at the county fairgrounds. He was returned to a showcase in the courthouse lobby, where he rests today.

Now, is this just another Texas tall tale? I don’t know, but a statue of Old Rip sits in a small plaza on Main Street, a couple of blocks west of the courthouse, along with a sign telling the story of the most famous horned toad ever. 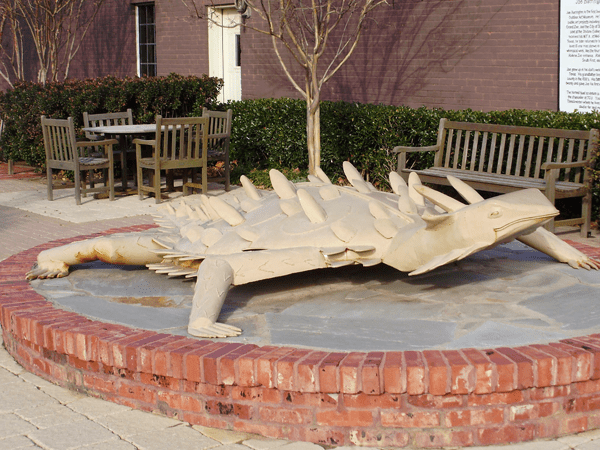 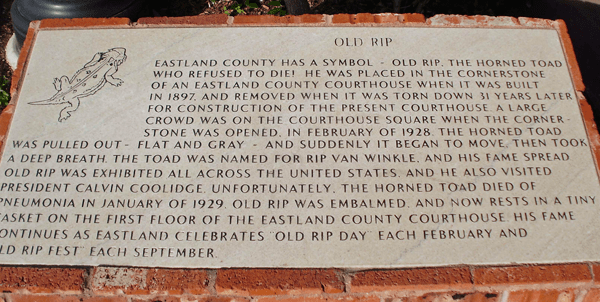 If you’ve never been to Eastland County, Texas, but this story sounds vaguely familiar, it may be due to the fact that in 1955, Old Rip was the inspiration for a Looney Tunes cartoon titled One Froggy Evening, which tells the story of a frog that is rescued from a cornerstone and was so happy he sang songs to celebrate. The story evolved into the character of Michigan J. Frog, the official mascot of the Warner Brothers Television Network.


The next time you’re driving along Interstate 20, from Abilene to Fort Worth, take a break and get off the highway in Eastland, and stop by the county courthouse to pay your respects to Old Rip. But keep a close eye on him… you never know when he might come back to life again!

Thought For The Day – Cancel my subscription because I don’t need your issues.

One Response to “The Legend Of Old Rip”