A couple of days ago in my blog Where The Trail of Tears Ended I told you about the hardships so many Native American suffered when they were forced to leave their homelands and relocate to what is now Oklahoma. This is a story from those days about a brave young Indian woman whose courage and compassion should not be forgotten.


We’ve all heard the story of Pocahontas, the beautiful Powhatan Indian princess who saved the life of Indian captive John Smith in 1607 by placing her head upon his to shield it when her father raised his war club to execute him. While it makes a good tale, many historians have suggested that the story is pure romantic fiction.

But in March of 1818, during the First Seminole War, a well documented act of compassion did take place that history has long overlooked.

Milly Francis (sometimes called Malee) was the daughter of Josiah Francis, better known as the Prophet Francis, the religious leader of the Red Stick movement in the Creek Nation. Born in the Upper Creek villages of Alabama around 1803, by all accounts Milly grew up to become a pretty young woman who was popular with everyone who knew her.

That time period was one of harsh struggle between the Indians and white settlers who wanted their ancestral homelands. Prophet Francis led his warriors against the United States army and white militiamen in the Creek War of 1813-1814, a futile effort to preserve the Indians’ way of life.

Prophet Francis (sometimes called Hillis Hadjo) fled to Florida with his family and the surviving members of his tribe after Andrew Jackson defeated the Creeks at the Battle of Horseshoe Bend, in 1814. War weary, homeless, and starving, they settled on the Wakulla River, hoping to live in peace. But peace would not come to them.

Always pressing forward, settlers demanded access to Indian lands in Florida, leading to the First Seminole War. Francis and his followers joined the new conflict and took part in several battles. Ordered to suppress Indian resistance at all costs, Andrew Jackson invaded Florida in March of 1818, and established Fort Gadsden on the former site of a British post on the Apalachicola River.

Soon afterward a young soldier named Duncan McCrimmon strayed from camp and was captured by two Creek warriors. Taken to the Prophet’s village on the banks of the Wakulla River, after he was interrogated about any information he might have about the strength of Jackson’s army, his captors prepared to execute him.

When Milly realized what was about to happen, she begged her father to save the young man’s life. While he was sympathetic, the Prophet explained that under Creek law, the young man’s fate was in the hands of his captors. He suggested that she speak with the warriors who were busy preparing to kill McCrimmon, but warned her that it would probably do no good. One of them had lost two sisters in the Creek War and was thirsty for revenge against any white soldier.


Undeterred, Milly went to the warriors and pleaded for the man’s life. One was willing to allow their captive to live, but the other stubbornly refused. Only blood could atone for the loss of his family members. Fifteen year old Milly would not give up and eventually convinced him that killing this young soldier, who was not much more than a boy, would not bring the warrior’s sisters back. McCrimmon’s life was spared and he was eventually ransomed by the Spanish commander at San Marcos de Apalache (Fort St. Marks) for 7 1/2 gallons of rum. He rejoined his own forces shortly afterward.

Days later the Prophet was lured aboard the USS Thomas Shields, a Navy warship, to discuss surrender and he was turned over to Andrew Jackson, who had seized the fort of San Marcos from its Spanish garrison. Jackson had what many have called a psychotic hatred of all Indians, and he immediately ordered that the Prophet and another Red Stick chief, Homathlemico, be hanged. Milly watched as her father was executed. Jackson, who had ordered the hangings, remained in his tent and did not witness the event.

Milly, her mother, and sister were ordered to Fort Gadsden to begin their return to the Creek Nation in Alabama, making their way on foot across today’s Apalachicola National Forest with only what they could carry on their backs.

By the time they arrived there, the story of how she had saved Duncan McCrimmon from death was spreading across the country. Newspapers called Milly the “New Pocahontas” and the “Creek Pocahontas.” Dismayed by her desperate plight, people began donating money to help Milly and her family. Duncan McCrimmon himself, now discharged from military service, traveled back to Fort Gadsden to deliver the money and to ask Milly to marry him.

While Florida legend claims that they married and went on to raise a family on the Suwannee River, that is not true. Milly thanked McCrimmon for his generosity, but gently declined his marriage proposal, explaining that her actions that day on the bank of the Wakulla River had been born of compassion for a fellow human being, a frightened boy in a terrible situation, and not because of any romantic interest. They parted as friends, and Milly returned to the Creek Nation with her mother and sister, where she eventually married a young Creek man. Unfortunately, her story does not have a “happily ever after” ending.

Widowed in 1836 when her husband died of fever while serving with the Creek Brigade against the Seminoles in Florida in the Second Seminole War, Milly Francis also lost at least two of her children to disease and famine. She walked the long Trail of Tears when her people were forced to march overland to Oklahoma Territory during the Indian Removal. She arrived at Fort Gibson, in present-day Oklahoma, in early 1838 and built a dirt-floored log cabin on the site of today’s Bacone College in Muskogee, Oklahoma, where she lived in poverty with her children, eking out a living any way she could.

It appeared that things might improve a few years later when Lieutenant Colonel Ethan Allen Hitchcock, a grandson of Revolutionary War hero Ethan Allen, was sent to Indian Territory to assess claims that corrupt Indian agents were cheating the people they were assigned to help. He met Milly and heard her story, and vowed to do something about it. He petitioned the War Department to do something to help Milly, and after two years of debate, in 1844 Congress approved a bill to give Milly a pension of $96 per year. Congress also awarded her a special “medal of honor” for saving the life of Duncan McCrimmon. But it then took another four years for the money and medal to actually be sent to Oklahoma. By then it was too late. Milly Francis died of tuberculosis in 1848.

Today this monument, funded by students in the 1930s, marks her gravesite on the campus of Bacone College in Muskogee, Oklahoma. 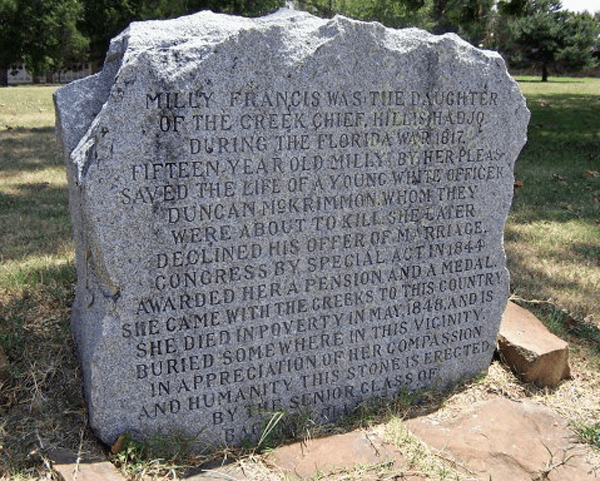 A second monument honoring the Creek Pocahontas is at San Marcos de Apalache Historic State Park in St. Marks, Florida, and a historical marker at Fort Gadsden Historic Site in Eastpoint, Florida also tells her story. You can learn more about the life of this amazing woman in the book Milly Francis: The Life & Times of the Creek Pocahontas, available on Amazon.

Congratulations John Berquist, winner of our drawing for an audiobook of Big Lake Burning, the sixth book in my Big Lake mystery series. We had 71 entries this time around. Stay tuned, a new contest starts soon.

Thought For The Day – Some days I have no idea what I’m doing out of bed.

2 Responses to “The Creek Pocahontas”