A couple of miles north of the friendly small town of Franklin, Kentucky, we came across a unique looking home with a fascinating history.


Octagon Hall, which is listed on the Register of Historic Places, was built by a gentleman by the name of Andrew Jackson Caldwell, following the style of octagon shaped houses that were popular in the mid-1840s. It was believed that the design allowed for better airflow, a stronger structure, and provided more usable square footage than traditional square or rectangular shaped buildings did. 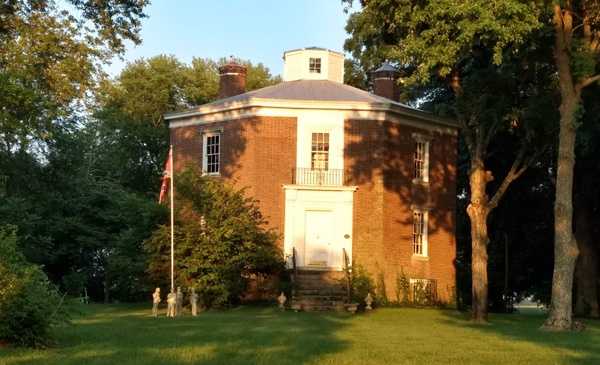 Caldwell and his slaves began working on the project, which he named Octagon Hall, in 1847, and it was completed in 1859. Ideally located on the L&N Railroad and the Nashville Pike, between Bowling Green, Kentucky and Nashville, Tennessee, the house became a local landmark.

Andrew Jackson Caldwell owned as many as 25 slaves and was a strong supporter of the Southern cause in the years leading up to and during the Civil War. As Union troops advanced in February,1862, the Confederate army retreated south from Bowling Green, as many as 10,000 of them camping along the way at Octagon Hall.

Even when the region fell under Union army control, Caldwell remained defiant. He secretly provided shelter and refuge to an untold number of wounded and fugitive Confederate soldiers to protect them from capture by the enemy. He also resisted in subtle ways, like routinely having his slaves plow up the road near his plantation to make it difficult for Union troops and supply wagons to navigate.

His efforts did not go unnoticed, and more than once Union soldiers raided the property in search of any Rebel stragglers. Frustrated that he would not cooperate with them, they killed all of Caldwell’s cattle, threw the carcasses of the dead animals into the wells to taint the water and confiscated anything of value they wanted. But even when they threatened to burn his home to the ground, Caldwell would not be intimidated. He had a brother who was a colonel in the Confederate Cavalry, and he told the Union commander they would soon face his sibling’s wrath, who was on the way there with a large force. The ruse worked and the boys in blue departed, leaving the house intact.

But they returned many times, sometimes in the middle of the night, hoping to catch Caldwell hiding a Confederate soldier. They never succeeded because the homeowner took advantage of hidden compartments incorporated into the building’s design, including one under the front steps of the home, along with escape tunnels to help his charges avoid capture.


Caldwell died in 1866 from typhoid fever, and his second wife, Harriet, continued to live in Octagon Hall until 1918. when the property was sold. Over the years it served as a private residence and a rental property until the Octagon Hall Foundation obtained it in 2001 and began a restoration project.

Today the historic old house is a museum displaying Civil War artifacts, and is home to the Kentucky Confederate Studies Archive. Visitors can tour the house, learn about Andrew Jackson Caldwell and his family, and do genealogical research in the archives. 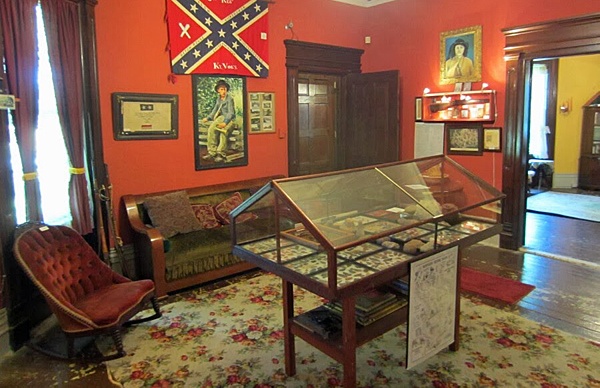 It’s not surprising that a house this old, with this history, should have a ghost story or two attached to it and sure enough, Octagon Hall does. Mary Caldwell, the daughter of the home’s builder and his first wife, Elizabeth, was about three years old when she fell into a fireplace in the basement kitchen and died from her injuries. It is said that the curtains in what was her bedroom move on their own, even when there is no breeze. According to one story I read, somebody was hanging a picture of Elizabeth Caldwell, the child’s mother, on a wall and clearly heard a little girl say “Mama” from behind him. When he turned around there was no one there

Visitors and staff have also reported hearing the sounds of men moaning in pain in the upper levels of the house, and photos taken have revealed such things as the shadowy image of women in long skirts from the Civil War era in rooms inside the house, and at least one soldier in a Confederate army uniform on the grounds outside. Several ghost hunting expeditions have been held at the property and it has been featured on more than one paranormal television show.

Besides the main building, the property also includes a couple of smaller buildings that were used for work projects or slave quarters. A small cemetery behind the house is the final resting place for both of Caldwell’s wives, his daughter Mary, and an unnamed baby boy. A path leads to a separate slave graveyard, and near it are the graves of two Confederate soldiers who died from wounds received in battle.

At one time there were thousands of octagonal houses in the country, but today only a handful of them remain. Octagon Hall is the only one still standing in Kentucky and is well worth the time to visit and take a tour. And who knows? You might run into the ghost of somebody from the past who can tell you some amazing first-hand stories!

Today is your last chance to enter our Free Drawing for an audiobook of Big Lake Burning, the sixth book in my Big Lake mystery series. To enter, all you have to do is click on this Free Drawing link or the tab at the top of this page and enter your name (first and last) in the comments section at the bottom of that page (not this one). Only one entry per person per drawing please, and you must enter with your real name. To prevent spam or multiple entries, the names of cartoon or movie characters are not allowed. The winner will be drawn this evening.

Thought For The Day – Do you ever listen to somebody talking and wonder, “How do you manage to get such a large foot into such a small mouth?”

One Response to “Octagon Hall”