We all know that’s a recipe for disaster, don’t we? The majority of car salesmen and RV salesmen have one thing in common – if their lips are moving, you can pretty much assume they are lying. And before you start jumping on me telling me that you know a good car salesman, note that above I used the word “majority” in describing the bad ones. I say that not just as a consumer, but as somebody who once spent some time as a car salesman in my often regretful past. Yes, there are some good ones out there, but in my experience from both sides of the sales desk, the sharks outnumber them at least 10 to 1.


As it turns out, you can’t trust a lot of the people working the car dealership service departments, either. Yesterday we had to take Terry’s Chrysler Pacifica minivan in for two recall issues, and at the same time we needed an oil change, filter, and tire rotation, which are included in our extended warranty.

We bought the minivan at a Chrysler/Dodge/Jeep dealership in Daytona Beach, but since then they have opened a second location in New Smyrna Beach, which is a lot closer to us. Hoping to avoid the longer drive and save some time, I called them to schedule the work.

When I made the appointment, the lady told me it should take no more than 90 minutes to complete everything. Okay, that’s not bad.

Finally, at 2 PM, 90 minutes after our scheduled appointment, we looked outside and the van was still parked right where it had been all along. I found one of the service writers and asked what was happening and he said he would check and get back with me. A couple of minutes later when I walked by his office again he was shooting the bull with two other company employees.

A few minutes after that, one of the service writers came up and told us they were just getting the ready to pull the van into the garage for the recall work, which would only take a few more minutes. I asked what was taking so long, and he said they had already changed the oil and rotated the tires. Terry asked how that was possible, since the van was still sitting in the parking lot where it had been since we arrived. He told her they did that kind of work outside where it was parked. I kind of doubt that when they have a huge indoor, air-conditioned service facility available.

So we waited, and then we waited some more, and half an hour later the same guy came along and handed me the paperwork, and said the van was almost done and they would be pulling it around in just a moment. Finally, at 3 o’clock, I tracked another employee down and asked where the hell my van was. He said he would find out, and a couple minutes later they did pull it into the pickup zone, more than an hour past the last predicted time for the job. I noticed that we didn’t get our complementary carwash, which is supposed to be included with every visit to the dealership, but I wanted to get home in time to watch a TV program at 8 PM, so I didn’t say anything and push my luck.

We really have no idea if they actually changed the oil and rotated the tires in the crowded, hot parking lot. But I do have a sticker in the windshield reminding me of my next scheduled oil change. I guess I won’t be going back there to get it done.


I think I’ve probably already told you before about how I talked myself into my first job as a printer’s devil at a small town newspaper when I was about 8 years old (it was a different world way back then). I knew even back then that I wanted to be a newspaperman and a writer someday. I was always fascinated by the huge, heavy old 4×5 inch Speed Graphic cameras that newspaper photographers used in those days and always wanted one of my own.

Last week I bid on two different ones on eBay and actually won both bids. Both cameras date back to the late 1940s to mid-1950s.The first one arrived today. It came with the original case, half a dozen film magazines, and a bunch of accessories. I think it looks pretty cool with my antique cabinet radio and wall phone. As for the second one, I’ve got two cabinet radios and two wall phones, so how could I not have two Speed Graphic cameras? 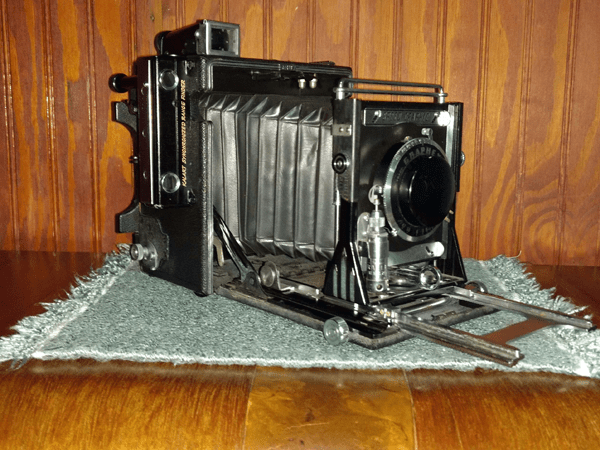 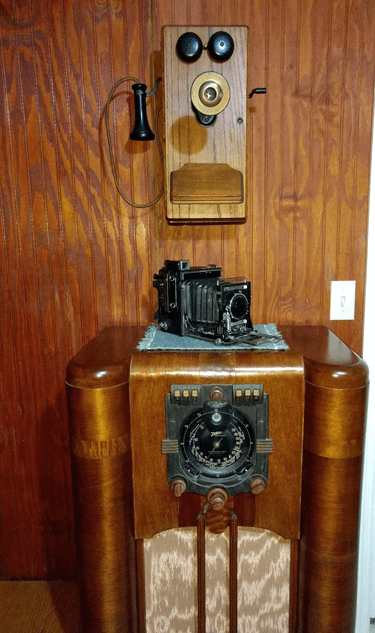 Thought For The Day – I have to stop chasing my dreams due to a restraining order.