Nick's Blog » I Am My Father’s Son

I wish you could have met my father. He was quite a character. He could play any instrument with keys or strings, though he never had a lesson in his life and couldn’t read music. He loved books, he was a fantastic storyteller, and he had a wicked sense of humor.


I guess I am my father’s son because except for the music I inherited at least a tiny bit of his other characteristics. When it comes to music, forget it. I can’t even play the stereo in my car. I tried to learn to play the saxophone once. I never was able to blow a single note, but I could scare the hell out of Terry’s cat.

When I was a kid, my dad did not much care for one of his brothers-in-law, a person who shall remain nameless. This fellow was pretty much a freeloader who abused everybody’s hospitality whenever he could. One time he showed up at our place and, like he always did, he overstayed his welcome.

My dad was driving home from work one evening and a large rattlesnake crossed the road. He got out and shot it, then got a wild idea for a prank. He had an old laundry basket in the trunk of his car and he coiled the dead snake up in the basket. When he got home, he told my uncle he had bought a bunch of steaks and ribs to throw on the barbecue, and asked him to run out and get them from the basket in the trunk of his car. Always looking for a free meal, the patsy hurried outside in the twilight, grabbed the basket from the trunk, and was back under the front porch light before he ever looked down and saw what was in it. The way I hear the story, they could hear his scream from half a mile away.

Another time, my dad had a car with a visor over the front windshield, similar to this one, although this is just a picture I found on the Internet. I don’t remember how it worked, but there was some kind of a knob on the inside of the car above the rearview mirror, and Dad could turn the knob to raise and lower the visor a bit. 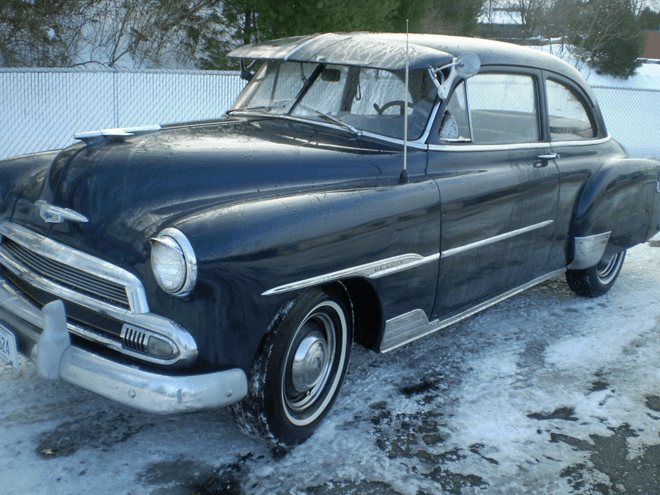 
I’ve been known to tell a fib like that now and then myself. Years ago we were having one of our Gypsy Journal RV rallies at the fairgrounds in Casa Grande, Arizona. At the time I had a beautiful Yamaha V-Star 1100cc motorcycle, which rode in the back of the van we towed behind our MCI bus conversion. I got the bike out of the van before the rally started, thinking I would take it for a ride. But, as it turned out, the battery was low. No problem, I had a battery tender, which is a small charger that connects to the motorcycle’s battery, which was under the seat and out of sight. I pushed the bike over to a power pole that had an electrical outlet on it, hooked up the connections to the battery, lowered the seat back down, and plugged in the charger. 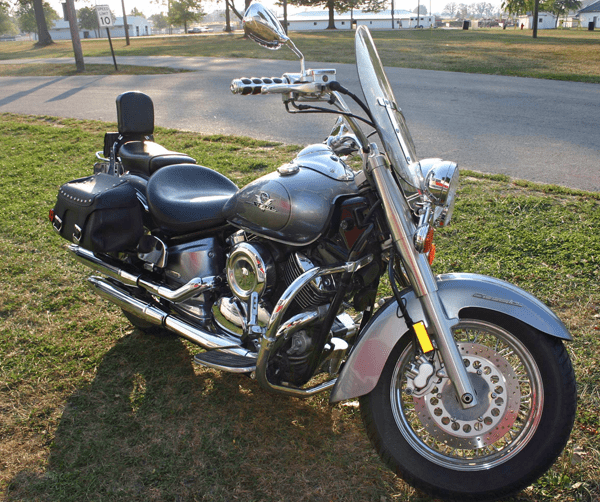 A couple of hours later one of the people who had arrived early for the rally asked me why my motorcycle was plugged in. I told him it was one of those new hybrid motorcycles that could run on either gas or electricity, and I was charging the batteries. He said he had never heard of a hybrid motorcycle. I told him they were new and hard to come by, but got amazing mileage. I said the last time I had put fuel in the motorcycle was almost 2,000 miles ago, and the tank was still almost full. “No way,” he said incredulously. “I swear to God it’s true,” I told him. And it was true; the last time I put gas in it was way back in Elkhart, Indiana and the bike had been riding in the back of the van ever since.

This gentleman told me he absolutely had to have a hybrid motorcycle like that and asked if I wanted to sell it. I told him no, they were too hard to come by and I didn’t know when I would find another one. The next day he told me that he had gone to the Yamaha dealer there in town and they told him they had never heard of a hybrid motorcycle. I suggested he just had to keep checking around, because like I told him, they were new to the market and most shops probably didn’t even know about them yet.

The rally began, everybody had a good time, and then we all headed for wherever our next stop was. I had completely forgotten about the incident with the motorcycle until I got an e-mail from the gentleman telling me that he had looked at over a dozen Yamaha dealerships across the country, and not one of those fools believed him when he told them about my hybrid motorcycle, even when he told them he had seen it with his very own eyes! I just smiled, kind of like my dad used to do.

The mosquitoes have been horrendous here this year, so yesterday I treated the yard with some stuff I got at the hardware store. You connect a garden hose to the bottle and lay down a cover spray all over the grass. It’s supposed to be very good at killing them. Then I realized that I had gotten some of the spray on my pickup, and not knowing what it might do to the paint, once the yard was done I decided to hose it off. While doing that I noticed some bugs and stuff that needed some extra effort, so I got a sponge and washed them off. Then I saw some more, and before I knew it I had half the truck washed. So I figured I might as well finish the rest. About the time I got that all done I remembered that our Ford Explorer was looking pretty grungy, so I washed it, too.

Meanwhile, Miss Terry was weeding and trimming up our banana palm trees. We finished up about the same time and agreed we’re too old for that kind of work on a hot, humid Florida day. But a tepid shower and a bottle of cold water made it all better. Once I cooled down I got to thinking about it and realized that I am not nearly as smart as my old man, because he wouldn’t be out there doing that kind of nonsense in this weather. Maybe I’m not my father’s son after all.

Thought For The Day – Sometimes even the devil on my shoulder asks, “What the hell are you doing?”