After our very long day driving through West Virginia that I wrote about in yesterday’s blog, we were both exhausted and slept very well at the Hampton Inn in Wytheville, Virginia.


One thing Terry and I discovered on the trip is that king size beds seem to be the norm in hotel rooms these days. We have a queen bed here at home, and since we usually fall asleep spooning and then wake up facing each other holding hands the next morning, we like the closeness it gives us. In a king bed it was hard to find each other! So the choices were either to sleep close to one side or the other of the bed, which meant the person on the inside had spent a lot of time finding the other edge when they had to get up to go potty, or to sleep in the middle so at least we each had the same amount of distance to travel. We seemed to do that most nights.

Wytheville seemed like a pleasant little town, though things weren’t always so pleasant around there. During the Civil War a lead mine in the area provided as much as one third of the lead the Confederate Army used for their bullets. That and a railroad connection to ship the lead out made Wytheville a strategic target for the Union Army. In July, 1863, Colonel John Toland led a force of over 800 men to take the town. While many people fled before the soldiers got there, about 120 of the town’s citizens, both men and women, stayed behind to defend their community.

The action was a disaster for the invaders. Firing single shot muskets from the doors and windows of their homes and businesses as the enemy rode down the main street, the defenders wreaked havoc on the Union troops. By the time the smoke cleared 86 of them had been killed or wounded, while the defenders suffered 11 dead and somewhere around 30 wounded. Among the dead was Union leader Colonel Toland. Two years later Wytheville was attacked again during Union General George Stoneman’s raid through the region in March, 1865.

The end of the Civil War did not mean the end of hard times for Wytheville. Many people suffered during the Reconstruction era, and old hatreds died hard. After Reconstruction, Jim Crow laws were enforced, and in 1926 the last lynching in Virginia took place there when it was discovered that an African-American man named Raymond Bird had had an affair with a white woman. She became pregnant, and although she said the relationship was consensual, it didn’t stop what happened next. Bird was shot, dragged behind a truck for several miles, and then his body was hung from a tree as a reminder of what could happen to those who stepped over the line. The crime provoked national outrage.

Some might say that karma was paying the community back for its sins during the polio epidemic of 1950, when Wytheville was hit hard by the terrible disease. Of the just over 5,500 citizens living there, 184 came down with polio, with 17 of them dying.

Today a museum exhibit in Wytheville tells the story of the days when polio destroyed so many lives. I’ll tell you about that and some other interesting places to visit in Wytheville in future blogs.

We originally planned to continue to take back roads going home, but between our experience on US 52 in West Virginia and the fact that a storm system was sitting over the area and didn’t seem like it was going to let up anytime soon, we instead decided to stick to the interstates. We stopped a couple of times in North and South Carolina along the way, but for the most part all we did was drive in the rain. Lots and lots of rain. At several points visibility was down to a car length or less, and myself and other drivers with any common sense were in the right hand lane with our flashers on, driving about 40 miles per hour. Meanwhile, others were passing us at what seemed to be at least twice that speed. There’s absolutely no reason in the world to drive that fast in those kinds of conditions.


Usually when we get to Jacksonville, Florida we take the Interstate 295 loop around the west side of town. But my GPS was alerting us to accidents on that route and on I-95 through the center of the city. So we decided to take the eastern loop instead. I won’t do that again. Traffic was crazy, and then we came to the Dames Point Bridge over the St. John’s River. It’s a really, really big bridge! I sniveled all the way to the top and all the way back down, and I’m not ashamed to say so. 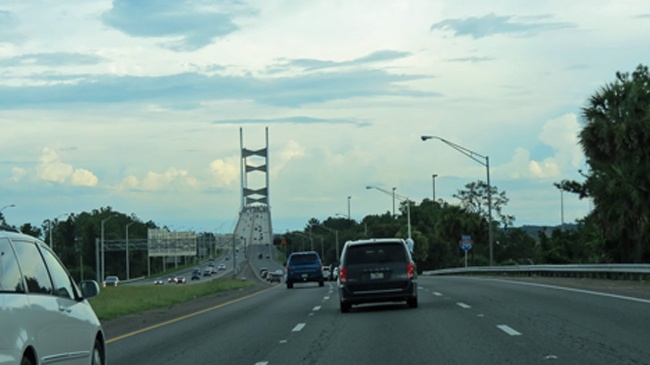 It sure was nice to get back home and sleep in our own bed for a change. We really enjoyed our trip, and we look forward to many more of them. But right now we’ve got plenty to do here at home to keep us occupied.

Several people have asked how we like traveling in the Pacifica and doing the motel thing after so many years of living and traveling in a motorhome fulltime. There is no question about it, both modes of travel have their positives and negatives. The RV was home and we had everything we needed with us wherever we went. We can only pack so much in the van to take on a trip. However, it is nice to be able to get on the back roads whenever we want to, and it’s so much easier to get off wherever we want, to explore some interesting site in the van or just to get fuel or a bite to eat.

This was our third long trip out of state in the van, and in those trips there has only been one hotel that we wouldn’t go back to. That was the Baymont Inn and Suites in Tuscaloosa, Alabama. It was a filthy armpit. Everyplace else we have stayed, mostly Hampton Inns, Fairfield Inns, Comfort Inns, Best Westerns, and a Microtel, have all been clean and comfortable. Considering the fact that our Winnebago diesel pusher averaged about 7 miles per gallon on the road, while the Pacifica gets an average of 27+ miles per gallon, the difference in fuel costs alone covers a lot of the expense of staying in a hotel. And remember, RV parks aren’t free. At this point in our lives, we are comfortable doing things this way.

It’s Thursday, so it’s time for a new Free Drawing. This week’s prize is an audiobook of Big Lake Lynching, the second book in my Big Lake mystery series. To enter, all you have to do is click on this Free Drawing link or the tab at the top of this page and enter your name (first and last) in the comments section at the bottom of that page (not this one). Only one entry per person per drawing please, and you must enter with your real name. To prevent spam or multiple entries, the names of cartoon or movie characters are not allowed. The winner will be drawn Sunday evening. 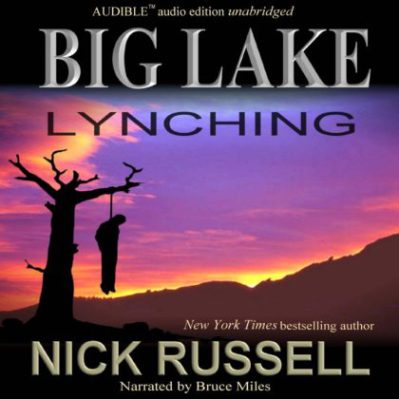 Thought For The Day – You have a very strong grasp of the obvious.

3 Responses to “Time To Go Home”