While it may seem odd to say that we enjoy visiting the dead, we have found some of our best stories while exploring cemeteries. After all, what better place could there be to learn about history than where those who made it are laid to rest?


On a trip to Muskegon, Michigan, we discovered the inspiring story of Captain Jonathan Walker, the man with the branded hand.

Walker was born on March 22, 1799, on Cape Cod in Barnstable County, Massachusetts. He grew up on the water and worked on fishing boats as a young man, married and fathered eight children, eventually becoming captain of his own vessel and enjoying at least moderate success

Looking for other opportunities, in early 1837 he moved to Florida and took on a contract to build a railroad. In those days it was common for slave owners to rent their slaves out as laborers, and Walker had several of them working for him. A staunch abolitionist, like many New Englanders, Walker found slavery repulsive, and while they were in his employ the slaves stayed at his family’s home, ate at the same table, and were treated as equals.

This quickly raised the ire of his neighbors, who did not appreciate Walker’s actions and let it be known that if he did not change his ways there would be consequences. By 1844, Walker and his wife Jane had grown weary of the attitudes of the pro-slavery citizens of Pensacola and decided that they did not want to raise their children in a place where slavery was the accepted practice. They moved back to Massachusetts, but once he had his family settled, Walker returned south to retrieve a small sailing sloop he had left behind.

As he prepared to sail back home, several of the slaves who had worked for Walker begged him to take them with him. Knowing that helping slaves escape was a serious crime, Walker still could not bring himself to leave them behind. So on June 22, 1844, he set sail along with seven fugitive slaves, intending to drop them off in the Bahamas, where British law would ensure their freedom.

Unfortunately, Walker was ill, and soon after leaving Pensacola his conditioned worsened. But rather than turn back to seek medical help, which would have resulted in his passengers being returned to bondage, the determined Yankee seaman continued onward.

Somewhere near Key West they were discovered and taken into custody by a Navy ship. Arrested and returned to Pensacola, Walker was locked in chains and thrown into a dank jail cell, where his physical condition worsened as mobs called for his lynching. But while many were eager to see him punished, Walker also had friends in Pensacola who came to his aid and tried to intervene on his behalf.

Facing the death penalty for his crimes if he even survived long enough to stand trial, Walker’s case soon became a nationwide cause. Abolitionists in the North demanded his release, newspapers took up the debate pro and con, and funds were raised to help his destitute family survive in his absence and to cover Walker’s legal expenses.


When he was finally brought to trial in November, 1844, Walker was convicted of four counts of slave stealing, sentenced to another 15 days in jail, forced to stand in the pillory for one hour while slave owners pelted him with garbage, fined $150, and the letters SS, standing for Slave Stealer, were branded into the flesh of his right hand. He remained stoic, never uttering a sound as the hot branding iron was applied to his skin.

But if Walker thought his ordeal was over, he was wrong. He remained in a cell while friends up north raised the money to pay his fine and court costs, and when they were satisfied, he was informed that he would still not be released because he was now going to be tried for the theft of the other three slaves who had been with him.

Disheartened with the news, late one night the prisoner tried to escape but was recaptured before he ever got out of the jail. As the months dragged on, Walker refused to apologize for his so-called crimes and he continued to speak out against the evils of slavery.

His second trial was held in May, 1845, and the judge instructed the jurors to find him guilty. They refused to do so, instead ordering a $45 fine and his immediate release. Even then, Walker remained in jail until another $2,000 was raised from supporters up north and he was finally set free.

Physically weakened and scarred emotionally as well as physically, he returned to New England where he received a hero’s welcome. For the next several years Walker appeared at abolitionist events across New England and the Midwest, where he received standing ovations and cheers whenever he stepped up to the speaker’s podium. Many times he shared the stage with escaped slaves, who told of their own suffering at the hands of cruel masters.

Those letters SS that had been burned so cruelly into his flesh took on another meaning to the anti-slavery crowd. Instead of a Slave Stealer, to them Jonathan Walker was a Slave Savior. John Greenleaf Whittier celebrated Walker with his popular poem The Branded Hand.

In 1850, Walker moved to the Muskegon, Michigan area, where he and his wife operated a fruit orchard, and he continued to be active in social reform movements for the rest of his life. Through the years his courage and dedication to his fellow man had not been forgotten. When he died in May, 1878, at the age of 79, a monument was erected in his memory and Frederick Douglass read his eulogy, calling Walker “a brave but noiseless lover of liberty.”

Today visitors to Evergreen Cemetery in Muskegon can stop at Walker’s monument to pay their respects to a man who suffered so much in a vain attempt to save others from bondage. His monument includes a hand branded with the letters SS, reminding us for all time that there are causes that are worth going to extreme measures for, no matter what consequences one may face. 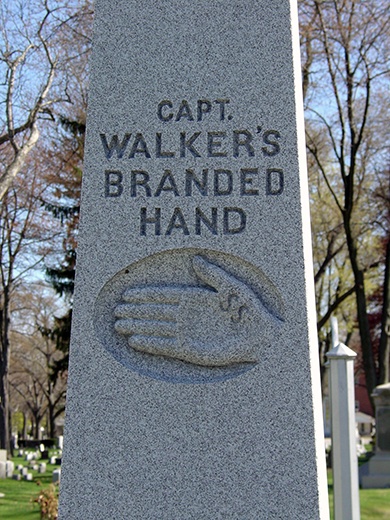 Thought For The Day – We’re going to need a bigger rock bottom.

3 Responses to “The Branded Hand”