When the Lewis and Clark Expedition reached the Pacific Ocean, the bedraggled group of explorers were exhausted and desperate for a break from their long overland journey. Captains Meriwether Lewis and William Clark established their winter quarters at Fort Clatsop, just south of present-day Astoria, Oregon, in December of 1805, but it was not going to be a pleasant respite. The weather was often harsh, supplies were low, and many of the men were ill.


Their diet ranged from elk to fish and dog, whatever they could hunt or purchase from the neighboring Clatsop and Tillamook Indians. Knowing that a supply of salt was necessary to improve the taste of their food, five men were sent to the coast to establish a salt works to boil seawater to obtain its salt.

They found a spot fifteen miles southwest of Fort Clatsop, in what is now Seaside, that was suitable for the operation. They reported back to Clark that the seawater had a high salt content, and game and wood were abundant. The crew camped in tents, near the mouth of the Necanicum River and the ocean.

There is no written description of the structure the crew built for boiling ocean water, but oral testimony about the site reported that stones were placed in an oven or rock cairn with one end left open. Working through the open end, a fire was built inside the stone oven and the kettles placed on the top.

Boiling the seawater in five brass kettles, and working around the clock in shifts, the crew was able to produce nearly a gallon of salt a day. Over a period of several weeks they produced almost four bushels of salt to last through the winter and on the expedition’s return trip east. Captain Clark applauded the men’s efforts and wrote in his journal that the salt they produced was “excellent white and fine.”

Keeping the fire hot enough to boil the salt water and maintaining the supply of fire wood was hard physical work. Records report that the salt camp was always short of food and that a hunting party was dispatched from Fort Clatsop to hunt game for the salt camp.

By the beginning of February the nonstop labor, lack of food, and bad weather had taken a toll on the men stationed at the salt works and all were sick. One of the men, George Gibson, was so sick that he had to be carried back to Fort Clatsop, and William Bratton suffered from back pain for the rest of his life.

With sufficient salt to last through the rest of the expedition, the camp was abandoned on February 20, 1806. Over time, nothing remained of the salt works except a stack of fire-blackened rocks which were once the furnace.


The Oregon Historical Society created a memorial at the old salt works in 1900 to honor the Corps of Discovery. Since there were few records, much of it was based upon the memory of a Clatsop Indian woman who was born in 1816 and remembered her mother’s stories of white men boiling water to make salt. In 1979, the site became an addition to Fort Clatsop National Memorial. 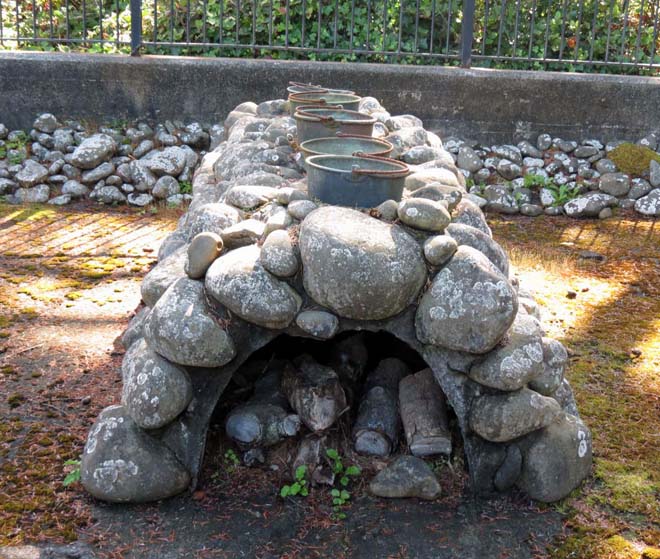 Today visitors can see a re-creation of the original salt works inside a fenced area on the south side of Seaside. From U.S. Highway 101, turn west on Avenue G and follow the green signs to South Beach Drive and Lewis & Clark Way. The narrow residential streets are not suitable for an RV. Leave your rig at one of the nearby campgrounds and drive your tow vehicle when you visit.

Thought For The Day – My priest said the demon really wants to leave, but I’m too clingy so the exorcism didn’t work.

One Response to “Seaside Salt Works”