Nick's Blog » It Is A Small World

Our reasons for being in the Cincinnati area were threefold, to do some book promotion, to meet with my author friend Carol Ann Newsome for a discussion on books and publishing projects, and to do some genealogy research.


We started the day we were scheduled to meet Carol Ann by visiting a place called Monmouth Street Antique Gallery in Newport, a 14,000 square foot place filled with all kinds of interesting and unique antiques and collectibles from days gone by.

I had not planned to buy anything, but you may recall that after I acquired my first antique cabinet radio a while back I came across the second one that was even better, and bought it, too. Something I like as much as antique radios are the old hand cranked wall telephones, and one hangs in my office above my second radio.

While we were at the antique mall I came across this old Lincoln Telephone and Telegraph Company phone at a price that was just too good to pass up. So, following the rule that if one is good, two is better, I bought it to keep my first phone company. It has some scuffs acquired over time, just like the scars I’ve picked up over the years, but a little furniture polish should hide most of them. I wish it worked that well for my scars. 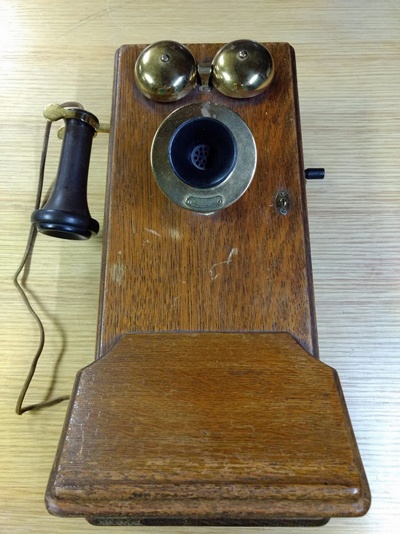 There was a yarn shop a block or so down from the antique mall, and while I was putting the phone in the back of the van Miss Terry stopped in there. With the phone safely secured, I joined her and we looked around for a little bit. It was getting close to the time we were supposed to meet Carol Ann, so I pulled Google up on my cell phone and asked for directions to Boswell Alley in Cincinnati.

This gave us the first of several small world reminders we would have that day. When the woman behind the counter at the yarn shop heard me, she said that Boswell’s was in her neighborhood across the river in Cincinnati. She asked if we lived there, too, and I told her no, we were meeting a friend for lunch. She asked who that was and I told her Carol Ann Newsom, and she said she knew Carol Ann from her days in the art scene, and even had one of Carol Ann’s paintings hanging in her house. Think about that. With well over two million people in the Cincinnati metropolitan area, what were the chances of meeting somebody in a small shop across the river in Kentucky who knows our friend?

Miss Terry had removed a shaft switching setup from one of her big Glamakra looms because she didn’t want to use it in that configuration. Don’t ask me what a shaft switching setup does, because it’s very confusing and way above my pay grade. At any rate, she found a buyer online who lived in, of all places, Cincinnati. So instead of having her pay for shipping, we said we would bring it with us and she could meet us to pick it up. We agreed to meet her and another weaving friend of hers at Boswell’s a half hour before our scheduled lunch with Carol Ann.

While I loaded the equipment into the back of their SUV, the women showed Terry some handmade shuttles and perns and said they got them from a place called the Weavers Loft in Indiana, about 30 minutes west of Cincinnati. As it turns out, we know Barbara, who owns the Weavers Loft. Back during our RVing days Terry bought a small loom and yarn from her and even took a one day class at her shop. That was our second small world incident for the day.


Located in a beautiful old brick building, Boswell Alley is a typical neighborhood pub, one of those places that remind you of the old Cheers television sitcom, where everybody knows your name. 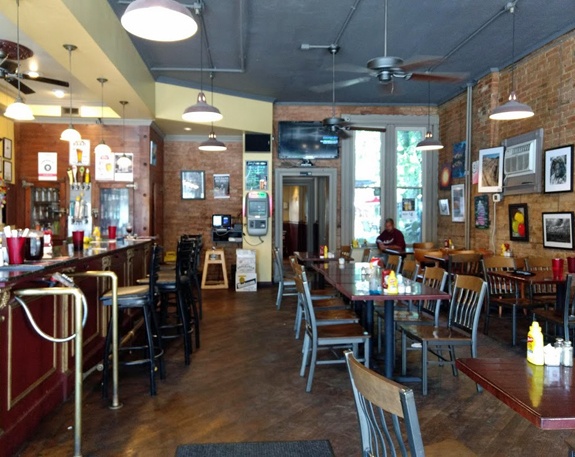 We had an excellent lunch there while visiting with Carol Ann, discussing writing techniques, book promotion, writers’ retreats and workshops, and how the self-publishing industry is constantly changing. If you are not familiar with Carol Ann and her excellent Dog Park mystery series, you really should be. Not only is she one of the nicest people you’ll ever meet, she’s a fine author who knows how to tell stories that keep you coming back for more. The first book in her series, A Shot In The Bark, is free on Amazon. 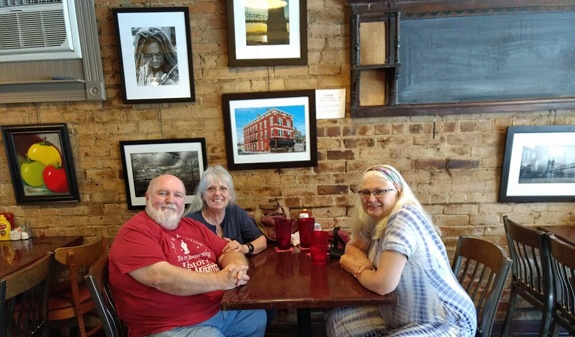 Carol Ann knows how much Terry and I love history, and that we spent a lot of time wandering through old cemeteries in our travels around the country. She had sent me a link to historic Wesleyan Cemetery in that same neighborhood in Cincinnati, suggesting that if we had time, we might want to check it out. Founded in 1843, Wesleyan is the oldest continuously operating cemetery in Hamilton County, Ohio. It was also the first cemetery in the area to accept African-American internments. 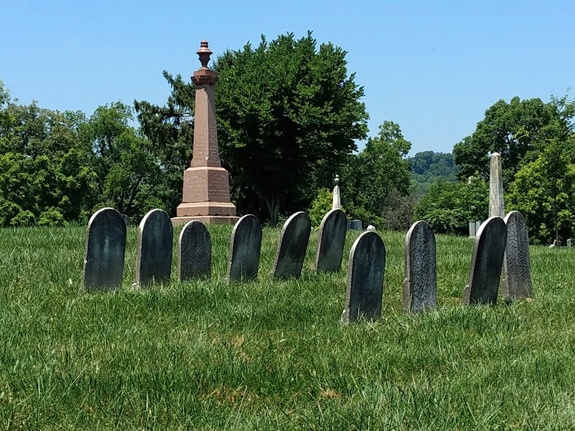 The historic cemetery was vital in what became known as “The Escape of the 28”, which was one of the largest escapes of runaway slaves in the history of the Underground Railroad. It happened in 1853 when an abolitionist farmer named John Fairfield led 28 fugitive slaves through Cincinnati to Wesleyan Cemetery in broad daylight, posing as a funeral procession. From there they made their way north to freedom across the border in Canada. Unfortunately, the cemetery has seen better days and has fallen into disrepair, with many headstones toppled and vandalized. 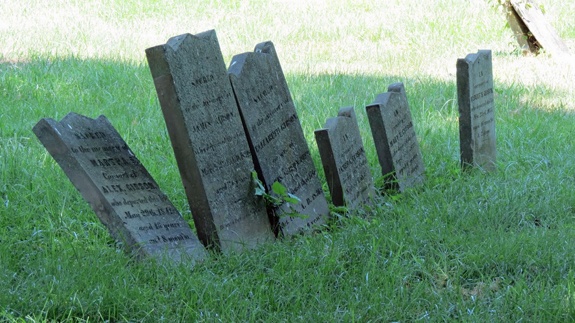 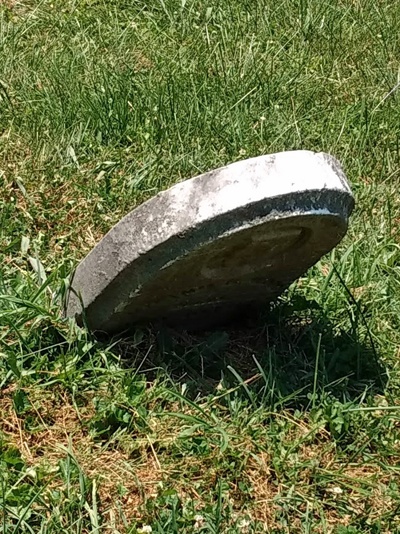 After our lunch with Carol Ann, we decided to drive to the Weavers Loft so Terry could invest the money she got from the shaft switching device in more yarn because, as any fiber addict can tell you, you can never have enough yarn.

We had a nice visit with Barbara, and then took the long way back to Newport, crossing the Ohio River and driving winding State Route 8 along the river.

Passing through nearby Covington on our way back to the hotel, we made a stop at the Kenton County Library, which has an excellent genealogy section. A very nice lady named Elaine, the chief researcher in the genealogy department, helped me look up some things on my family history, and in the process she helped me get through one of the brick walls I have been dealing with for a long time.

John Sanders Stephens was my paternal grandmother’s father, and I have learned a lot about him and his family in my research. I also knew that my paternal grandfather’s father, Richard G Russell, had lived in Cincinnati and served in the Union Army during the Civil War. But I didn’t know much else about him, except that he died in 1890. Elaine discovered that he was buried in the very same Wesleyan Cemetery that Carol Ann had told us about earlier that same day. Yes, it is a small world, isn’t it?

All Elaine could find was the section number of the cemetery, but not the actual plot he was buried in. We went back to Wesleyan hoping we might actually locate his headstone, but as I said before, many of them are missing. We were not able to find his grave, but it still felt good to know we were somewhere close to yet another link from my past. We would find even more links while we were in the area, including a couple of startling discoveries about my grandparents. I’ll tell you about them in another blog.

Be sure to enter our latest Free Drawing. This week’s prize is an audiobook of Ken Rossignol’s The Chesapeake: A Man Born to Hang Can Never Drown. It’s a collection of adventures in prose from around the Chesapeake tidewater region told by an erstwhile and eclectic collection of bards, poets, and tale-tellers. Fans of short stories will enjoy this fourth book in the Chesapeake series and the valuable history shared about the Chesapeake region. To enter, all you have to do is click on this Free Drawing link or the tab at the top of this page and enter your name (first and last) in the comments section at the bottom of that page (not this one). Only one entry per person per drawing please, and you must enter with your real name. To prevent spam or multiple entries, the names of cartoon or movie characters are not allowed. The winner will be drawn Sunday evening. 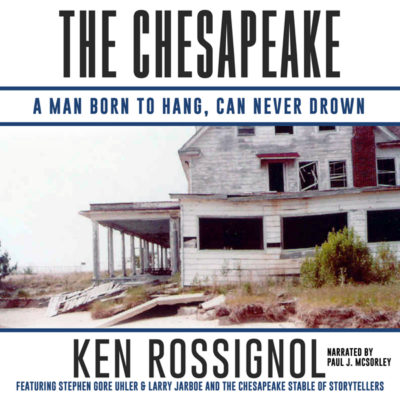 Thought For The Day – I thought growing old would take a lot longer.

3 Responses to “It Is A Small World”