As I said in yesterday’s blog, we took a road trip to visit family and friends and do some genealogy research, along with gathering lots of stories about interesting places to visit for my blog readers. Rather than cram too much into one very long blog, I will be talking about the overall details of our trip in the next few blogs, and then I will post blogs dedicated to some of the interesting places we visited along the way.


We left Florida on Friday, July 6 and made the 640 mile trip to Tuscaloosa, Alabama in one day. That’s a very long day in an RV, and it was even long in our Chrysler Pacifica. Or maybe I’m just getting too old to do that anymore.

Part of the problem was that our GPS decided to take us on the scenic route about the time we passed Fort Benning and Columbus, Georgia. I spent some time there when I was a young soldier learning how to jump out of perfectly good airplanes, and I wasn’t all that fond of the place back then. I’m still not.

We eventually made it to Tuscaloosa and checked into the Hampton Inn near the University of Alabama campus, then drove a couple of miles to my son’s house. Travis and his pretty wife Geli greeted us with hugs and kisses that made all the long miles worthwhile.

Travis is a fine young man, even though he looks pretty intimidating with his beard and tattoos. And while I hate to say it, I’m thinking about having a DNA test to find out if he’s really my kid. People say he looks like me, but I’m just not convinced he’s really mine. You see, my son is a gardener. He absolutely loves growing things. I, on the other hand, don’t have a green thumb. About the only thing I’ve ever been able to grow is a belly. A really big belly!

Travis had all kind of things growing in his garden, including tomatoes, cantaloupe, peppers, and several kinds of melons. 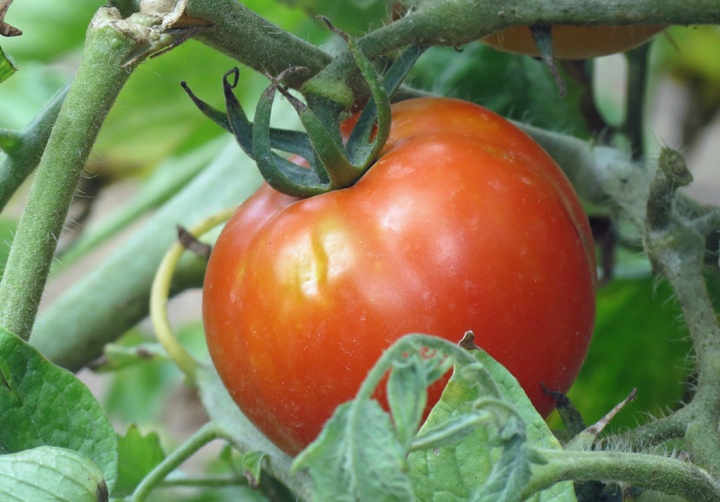 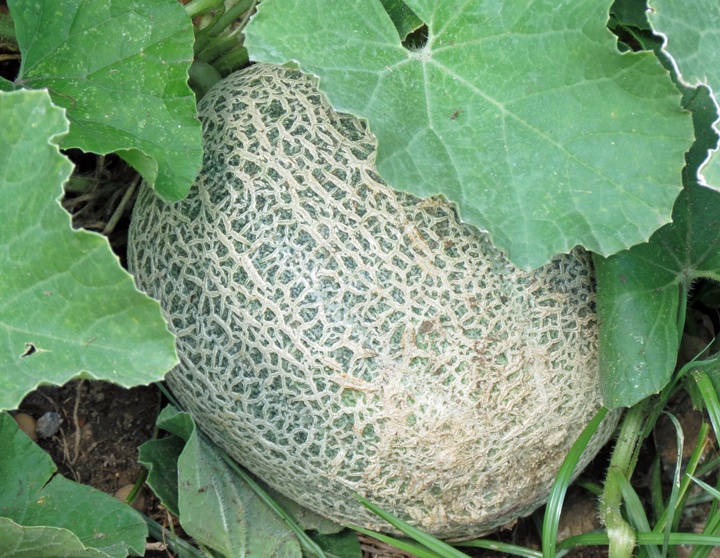 And not only does he grow all these things, he eats them! Travis and his wife are vegans, if you can believe that. Me, I’m strictly a meat and potatoes guy. Fried dead meat, barbecued dead meat, baked dead meat, if it’s meat and it’s dead, I will eat it. Not Travis. He tried to get me to eat some kind of burger made out of soy or beans or some such nonsense. He even had bacon and sausage with no meat in them. And what the hell is hummus? I tried to explain to him that those fake foods are like taking a pretty lady on a date and finding out at the end of the evening that she’s really a guy under all that makeup and lipstick. It’s just not the same. Like I said, I think a DNA test is in order.


Okay, while I don’t eat vegetables or other things that gardeners raise, I do make a few exceptions to the rule. One of them is watermelon. We picked this one from the garden and cut it up to eat. It was really delicious and beats anything you’re ever going to buy in a grocery store. 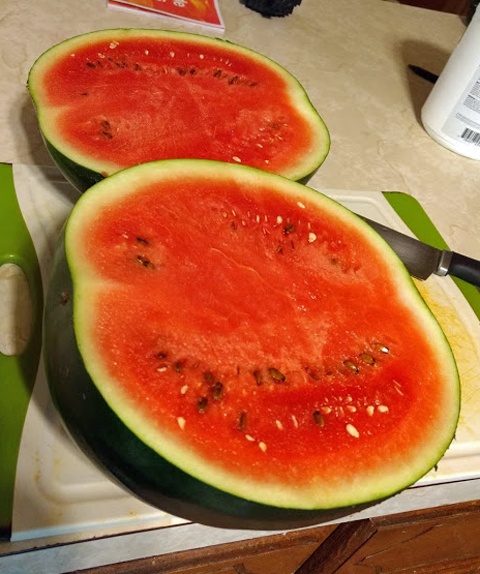 While we were in Tuscaloosa we discovered a really good pizza place called Pyro’s. This restaurant is really cool, because you pick all of your favorite items such as meats, cheeses (regular and vegan), and vegetables, even your sauces, from the options in front of you like you do when going through a Subway sandwich shop. Except at Pyro’s you can have any amount for a fixed and very reasonable price. Then they cook it right in front of you in a wood fired oven!

Did you know vegans eat pizza? They do as long as there are no animal products in it. This was Geli’s veggie pizza. 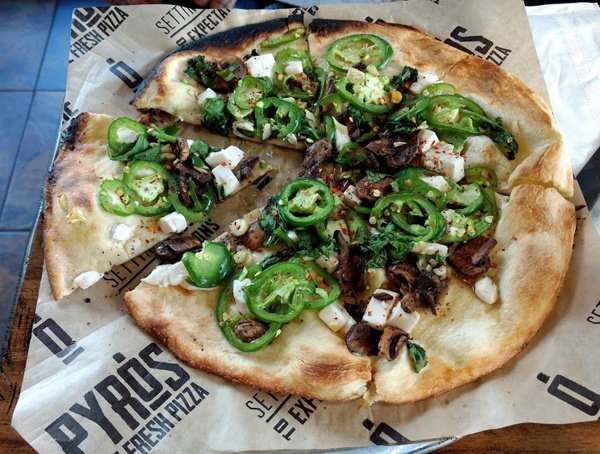 At least Miss Terry had the good sense to request pepperoni on hers. I’d show you my pepperoni pizza, but some fat guy ate it before a picture could get taken. 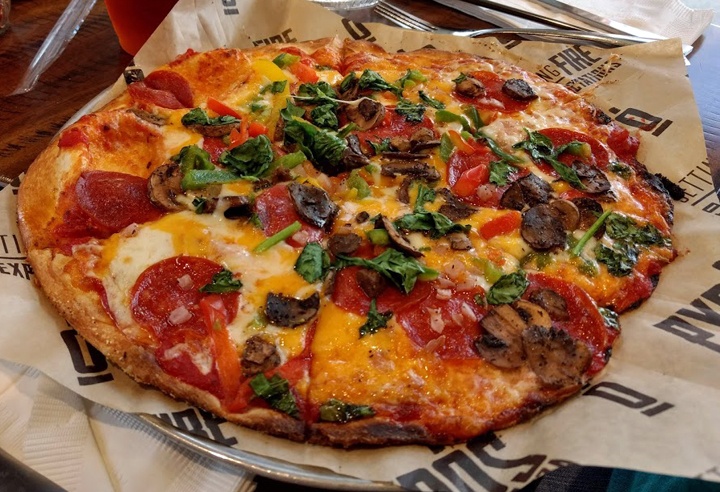 The food was so good at Pyro’s that we went back another day while we were in town. They have several locations in different cities in the South, but unfortunately none of them here in Florida that I could find.

Here’s something else about the place that really impressed me. An automatic hand washing station. How cool is that? 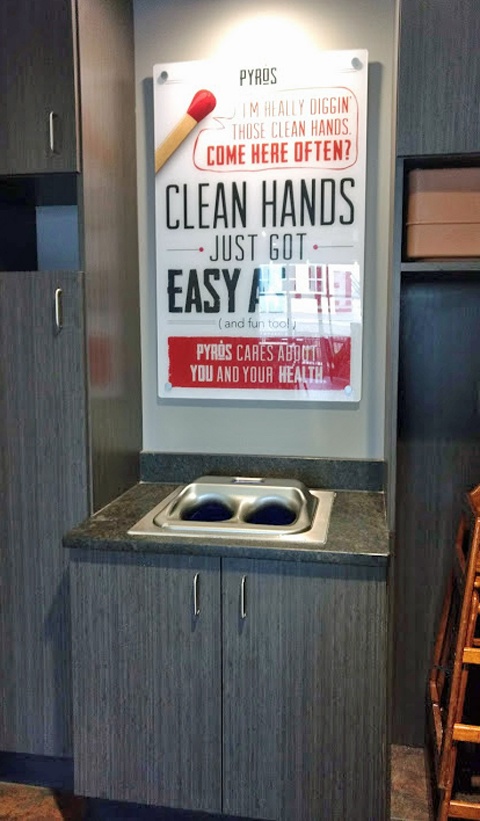 You just stick your hands in these openings and they are automatically washed and then rinsed for you. What will they think of next? 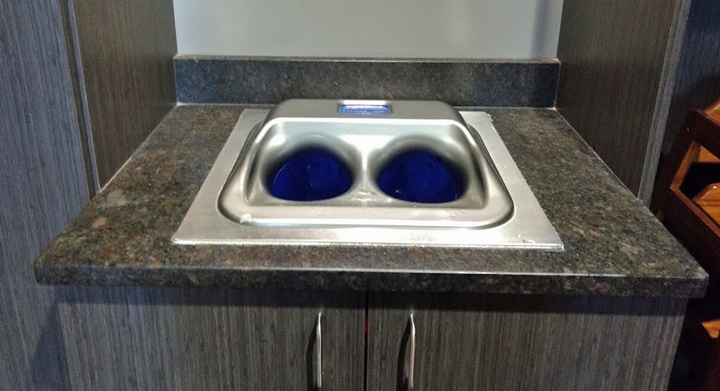 While we were in Tuscaloosa we visited a couple of antique malls and at the first one Terry found a vintage ricer with the stand and pedestal, something she’s been looking for for a long time. And then at the next place they had another one! And believe it or not, a third one at another shop! She was thrilled, to say the least. 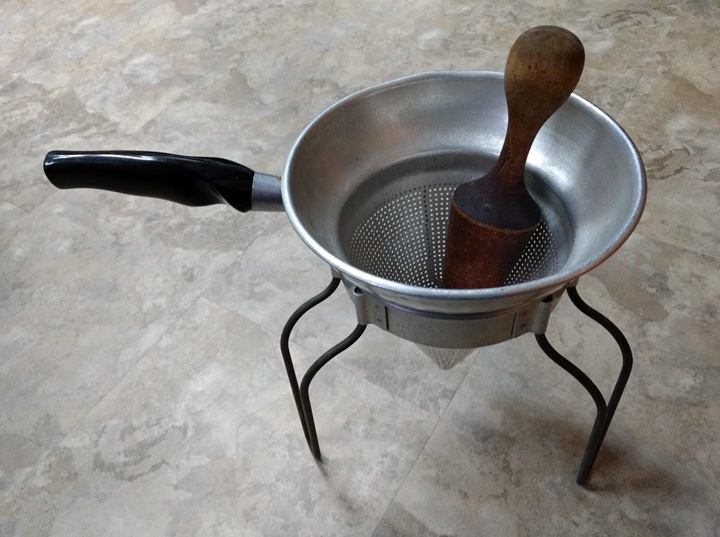 We spent several days in Tuscaloosa with the kids, and really had a good time. And since they’ve got a couple of dogs and some cats, Terry and I managed to get our puppy and kitty fixes, too.

In tomorrow’s blog, I’ll tell you about our trip north from there, and a stop in southern Kentucky to meet up with longtime RVing friends Tom and Barbara Westerfield.

While we were off playing, some of my author friends were busy working. My pal Mona Ingram just released a new light romance titled Love on the Half Shell. It’s about the mayhem ensues when a 12-year old decides to find a husband for her mother. Mona is an excellent author and I guarantee you’re going to enjoy it. 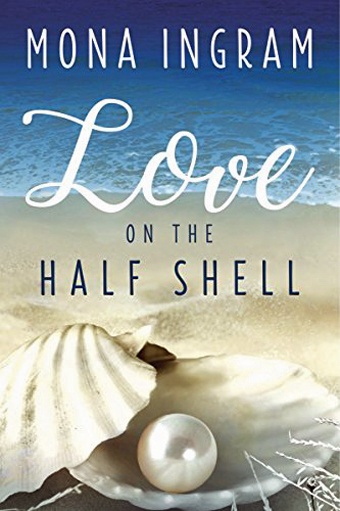 Thought For The Day – I keep my enemies close because you can only throw a rock so far.