Back when we were teaching at Life on Wheels we spent a lot of time in southern Kentucky since one of our venues was at Western Kentucky University in Bowling Green. So it kind of felt like old home week when we were visiting our friends Tom and Barbara Westerfield just south of there in Franklin.


When we left them, we traveled north to Louisville on Interstate 65, then turned east on Interstate 71 for another 75 miles or so before hooking up with Interstate 75 for the short drive north to the Ohio River. This was only the second or third time we had ever taken Interstate 71, and I’m not a fan of it. Most of the way it’s a four lane divided highway, with quite a few hills and curves and lots of 18 wheelers in both lanes to keep you from making very good time. And, of course, Interstate 75 is a madhouse just about every mile of the way from Northern Michigan all the way down to Florida.

We had reservations at the Comfort Inn in Newport, Kentucky, just across the river from Cincinnati, Ohio. We were really pleased when we got there to discover they had upgraded us to a king suite on the fifth floor with an amazing view of the Cincinnati skyline across the river. 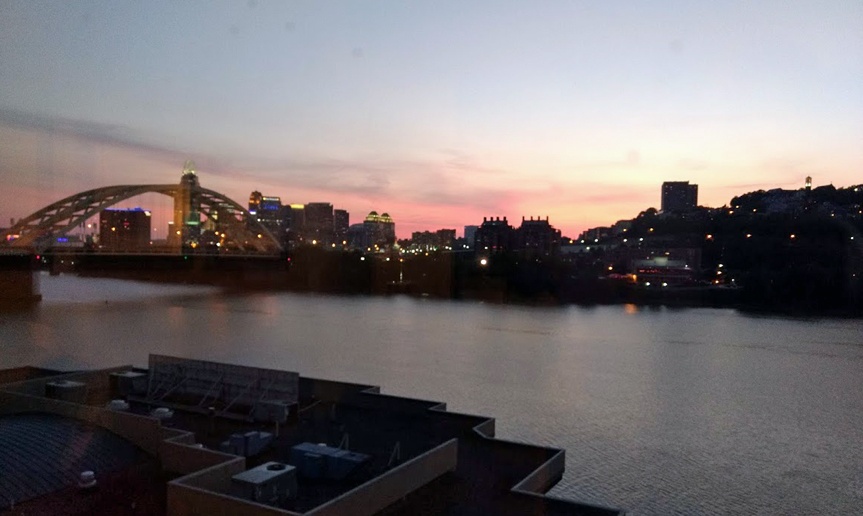 There was always a lot of traffic on the river, everything from small pleasure boats to barges, and even paddlewheel tour boats. Just sitting, watching it all go by was interesting and relaxing. 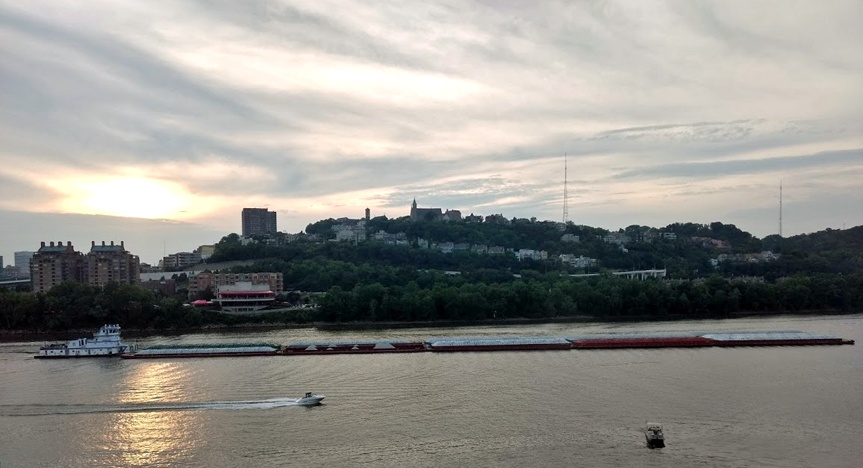 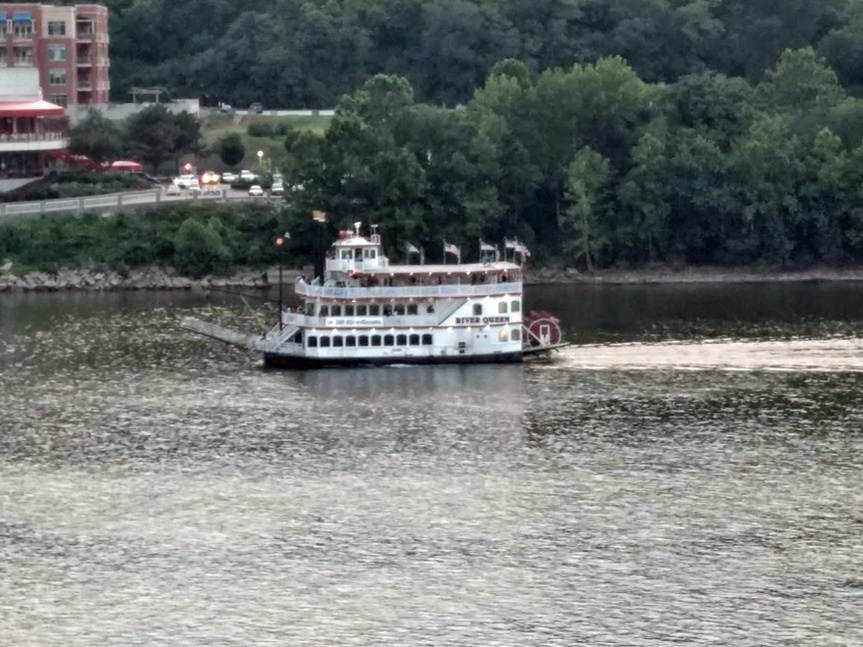 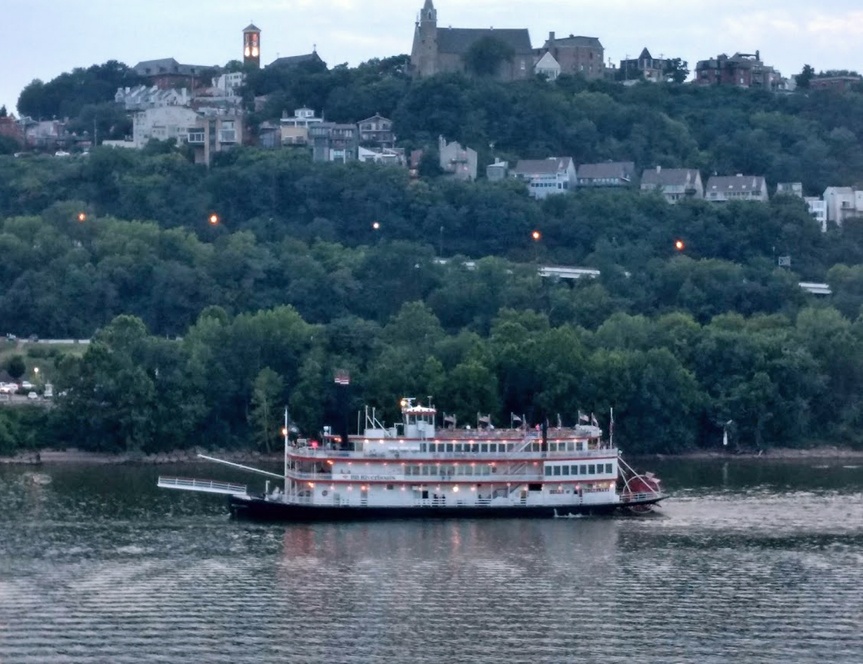 While it’s a clean, friendly community full of beautiful old homes and commercial buildings these days, Newport has quite a history, and it was not always pretty. Settled in the 1790s, the city’s strategic location on the Ohio River made it important both as a shipping point and as a military base. In 1803, a military post called Fort Washington moved there from Cincinnati and was renamed the Newport Barracks.

During the Civil War, both Union and Confederate recruiting officers were kept busy in Newport. The city was also a frequent stop for runaway slaves who knew if they could make it across the river to Ohio from there, they stood a good chance of escaping the slave hunters who were always hot on their trail.

When the Volstead Act brought prohibition to the United States in 1919, Newport became popular for its speakeasies, brothels, and gambling halls, earning it the name Sin City. Today Monmouth Street in Newport is home to interesting restaurants, shops, and boutiques, but back in the day it was the epicenter of corruption. No matter what your vice was, you could find it there.

We had dinner at two places on Monmouth Street, Mad Mike’s Burgers & Fries, which claims to have the best burgers in town. The portions were generous and the food was okay, but nothing to write home about, in my opinion. But right next door, Strong’s Brick Oven Pizzeria was outstanding. We’d go back there again anytime.

Newport’s wild and woolly days are long gone, and today the city has reinvented itself as a family friendly tourist destination, featuring the Newport Aquarium and the Newport on the Levee entertainment complex, with restaurants, a comedy club, pubs, and concerts.


Newport has a lot of neighborhoods that seem to be entities unto themselves, with their own corner stores, restaurants, taverns, and other small businesses. 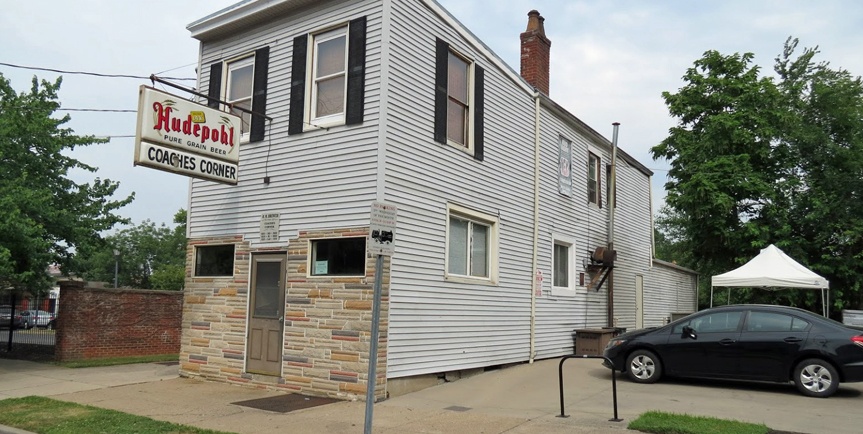 We spent a lot of time just driving around the neighborhoods admiring the local architecture. There was a time when the big money financiers from across the river in Cincinnati built stately homes in Newport, though these days many of them have been converted to apartments and things like law offices. 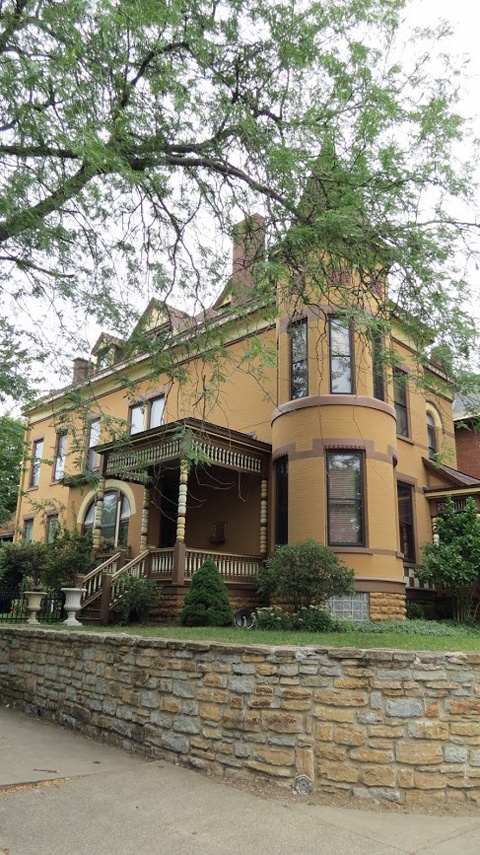 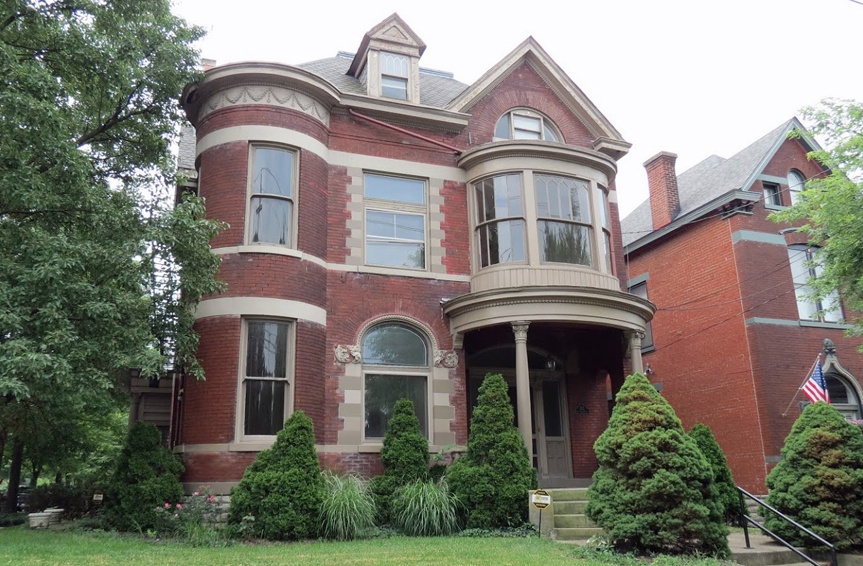 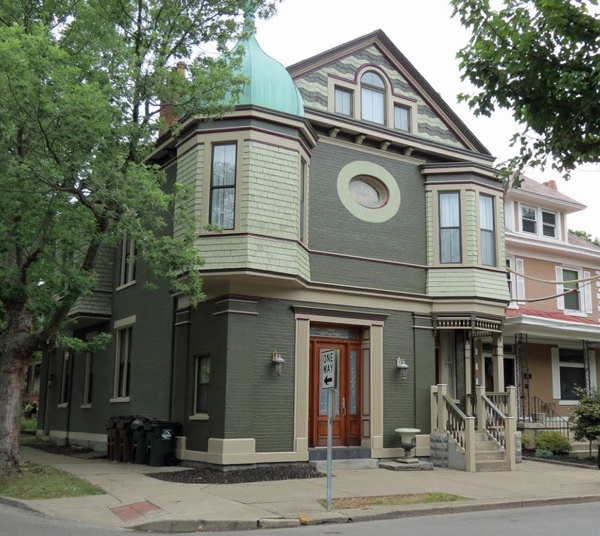 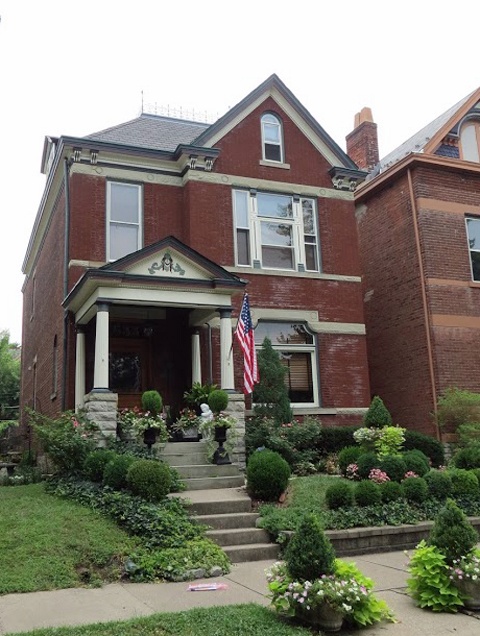 This house was the boyhood home of old time television personality Durward Kirby, who was the sidekick on the old Garry Moore Show, and later on Candid Camera. 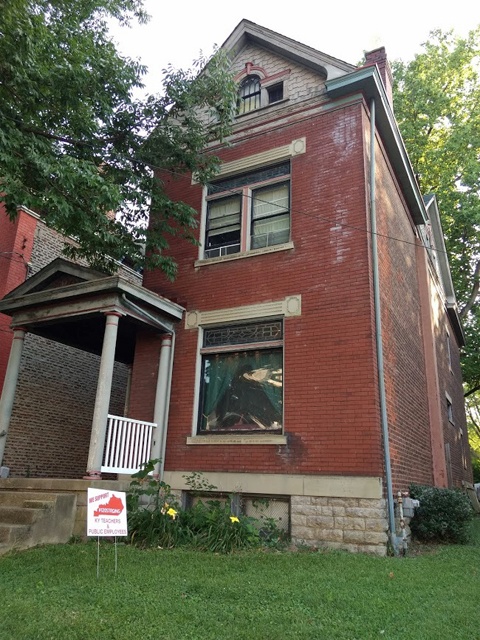 Some of the side streets are pretty narrow, and I wouldn’t want to drive an RV through them. 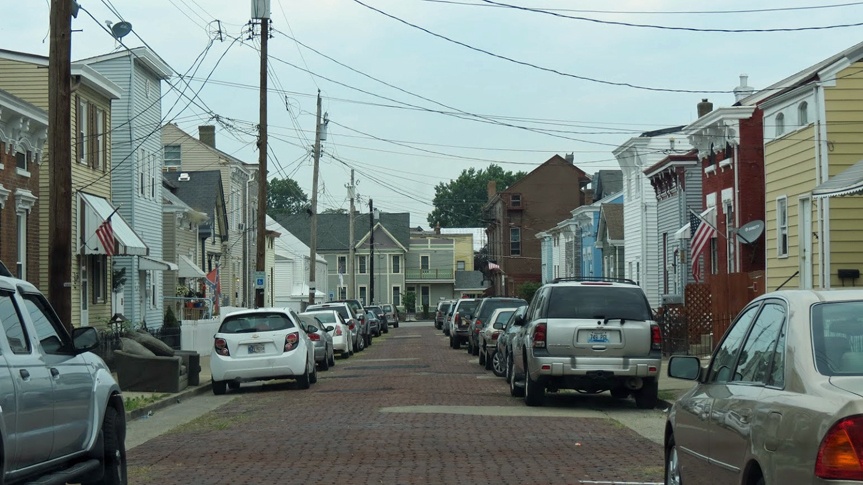 We had a good time in Newport, even if it’s no longer Sin City. Or maybe because it isn’t. But visiting Newport wasn’t our main reason for being in the area, and I’ll tell you about some of that in tomorrow’s blog, as well as about a series of coincidences we encountered that show we really do live in a small world.

Be sure to enter our latest Free Drawing. This week’s prize is an audiobook of Ken Rossignol’s The Chesapeake: A Man Born to Hang Can Never Drown. It’s a collection of adventures in prose from around the Chesapeake tidewater region told by an erstwhile and eclectic collection of bards, poets, and tale-tellers. Fans of short stories will enjoy this fourth book in the Chesapeake series and the valuable history shared about the Chesapeake region. To enter, all you have to do is click on this Free Drawing link or the tab at the top of this page and enter your name (first and last) in the comments section at the bottom of that page (not this one). Only one entry per person per drawing please, and you must enter with your real name. To prevent spam or multiple entries, the names of cartoon or movie characters are not allowed. The winner will be drawn Sunday evening. 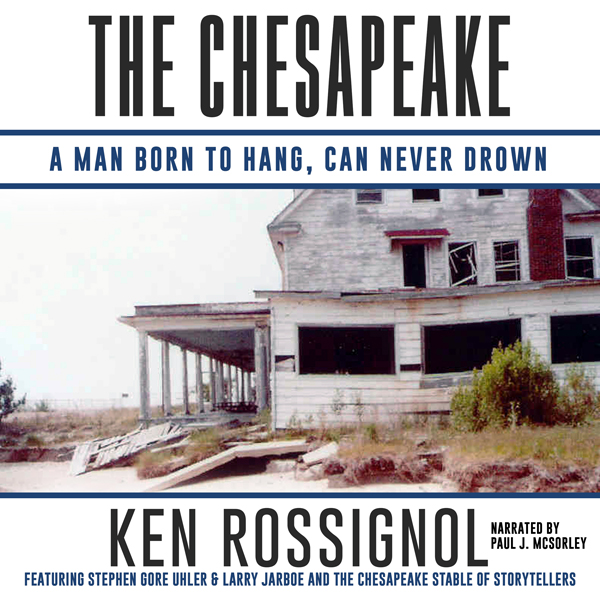 Thought For The Day – Apparently I snore so loud that it scares everybody in the car I’m driving.