We have had several incidents that resulted in serious injuries and even some fatalities here in Florida recently. And while I’m sorry for the victims, I can’t help but wonder what the heck they were thinking.

Florida is known as the lightning capital of the United States. You have got a better chance of being struck by lightning here than any place else in the country. And you really increase those odds when you do dumb things like stand around in wet sand in the middle of a lightning storm, or crawl on a boat with massive metal pontoons holding it up in the water, or get up on a roof. The local weather people say that you don’t have to be in the middle of a storm to get hit by lightning. You can be as much as 15 miles away and still be a target.

And it’s not just here. On several occasions during our fulltime RV life we saw people washing the roofs of their RVs during storms. Now think about it, you’re standing on top of a metal box, making you the highest thing around, in the middle of a storm. What could possibly go wrong? Somebody told me once that he was safe because the RV had rubber tires, which insulates it. I don’t know if that’s true or not, but I’m damn sure not going to crawl up on the roof of one during a thunderstorm to find out! When the weather is bad, I take my own advice and stay inside!

Speaking of weather, there are two things you can count on this time of year in Florida; it’s going to be hot and sticky, and you’re going to get a thunderstorm every afternoon. So, taking my own advice as I mentioned above, I have been spending a lot of time at the computer. I was hoping to get another 5,000 words in yesterday, but Steve the computer, being Steve, decided it would be a good day to mess with me. So he did, losing video and data several times, slowing down to the speed of sludge, along with all of the same nonsense he’s been doing for a while.


Finally, late in the afternoon, he seemed to tire of it and began working correctly again, and I managed to end the day with just under 3,000 words. As soon as Steve’s replacement is here, he’s in for a rude surprise. I can’t decide if I should shoot him, gut him out and throw what’s left in the trash, or put him up on the roof and wait for the next lightning storm.

If you like science fiction, historical fiction, and time travel, check out my buddy Stephen Arsenault’s brand-new book Quantum Civil War, the first book in his new Quantum saga. It will keep you reading late into the night!

Be sure to enter our latest Free Drawing. This week’s prize is an RV camping journal  donated by Barbara House. Barbara makes several variations of these, and they all have pages where you can list the date, weather, where you traveled to and from that day, beginning and ending mileage, campground information including amenities at RV sites, a place for a campground rating, room to record activities, people met along the way, reminders of places to see and things to do the next time you’re in the area, and a page for notes for each day. To enter, all you have to do is click on this Free Drawing link or the tab at the top of this page and enter your name (first and last) in the comments section at the bottom of that page (not this one). Only one entry per person per drawing please, and you must enter with your real name. To prevent spam or multiple entries, the names of cartoon or movie characters are not allowed. The winner will be drawn Sunday evening. 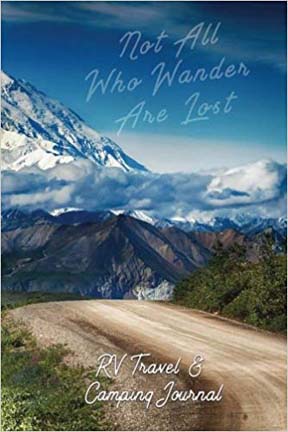 Thought For The Day – Life doesn’t just hand me lemons. Sometimes it puts lemons in a sock and beats me with them, prison style.

11 Responses to “Stay Inside!”