Just steps away from the Mayflower II on the Plymouth, Massachusetts waterfront can be found an immortal icon to American history. Plymouth Rock has been a symbol of the pioneer spirit and the potential America holds for all who come here. Seen as solid, steadfast, and everlasting, the original large granite boulder upon which the Pilgrims first set foot on America is revered. The only problem is, the story may well be a myth. 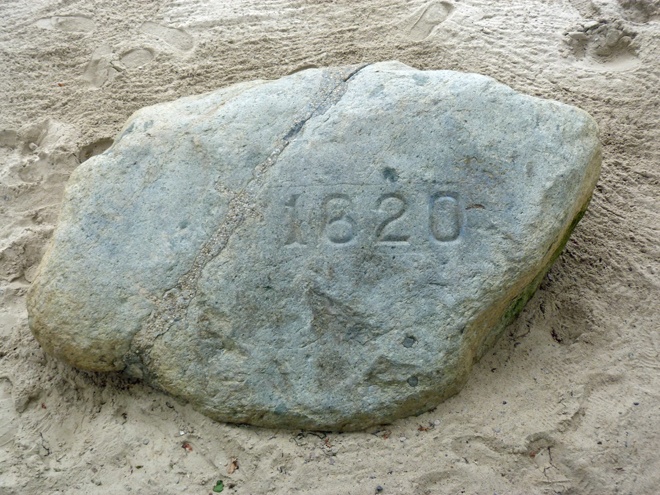 Even ignoring the fact that the Pilgrims first landed at the tip of Cape Cod, at present-day Provincetown, where they spent several weeks exploring before they decided to settle at present-day Plymouth, neither William Bradford nor Edward Winslow, both of whom wrote extensive journals describing nearly everything about the Pilgrims’ experience, ever referred to the rock in descriptions of the scene.


Some speculate that the rock was only a convenient landmark, or was used as the base of a makeshift pier. In fact, it wasn’t until 1741, over 120 years after the Pilgrims arrival, that the rock was ever mentioned as their landing place. That year a shoreline construction project to build a wharf began and Thomas Faunce, a 95 year old Elder in the First Church who knew some of the original Pilgrims, said the rock should be spared because it was where the Pilgrims first made landfall.

During the American Revolution, in 1774, the rock was accidently broken in half when it was moved to Town Square and displayed as a monument to liberty. The townspeople decided to only move the top half, which still required 30 teams of oxen. The bottom half was left in place and became part of Hedges Wharf. In 1834, the top half of the rock was moved again, this time to Pilgrim Hall on Court Street.

In the mid-1800s, the original base of the rock was swept off from time to time, and a hammer and chisel were reportedly kept nearby to be used by souvenir hunters.

In 1867, the long-neglected bottom half of the rock was trimmed to fit inside a new Gothic-style granite canopy. Thirteen years later, in 1880, the top half of the rock was moved once again, and reunited with its base. At that time, the date 1620 was carved into the rock, to replace the painted numbers that had adorned it.


To celebrate the 300th anniversary of the Pilgrims’ landing, in 1921 a new portico was built over the rock. In 1970, Plymouth Rock and the portico were listed in the National Register of Historic Places. 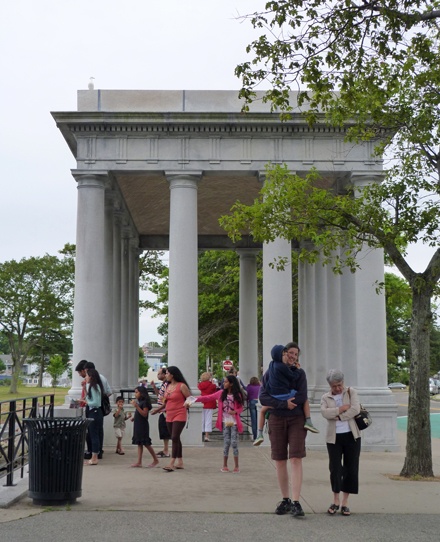 So did the Pilgrims actually step on Plymouth Rock? Nobody really knows, but the story has became part of the fabric of American culture. And though Plymouth Rock is only a third of the size it was when the Pilgrims arrived, it remains a powerful icon, visited by hundreds of thousands of tourists every year.

Thought For The Day – I’m done chasing people who won’t do the same for me. After today, the ice cream man can go to hell.