Being an old newspaperman, I’ve spent a lot of time in print shops over the years. It’s one thing to watch newspapers rolling off a press, and something else entirely to watch money being churned out. On a visit to Washington D.C., we got to see just that!


Located in the heart of the nation’s capital, just a few blocks from the Washington Monument, the Bureau of Engraving and Printing’s Tour and Visitor Center is the place to learn all about U.S. paper currency – its history, how bills are designed, how it’s printed, and security measures used to battle counterfeiters. 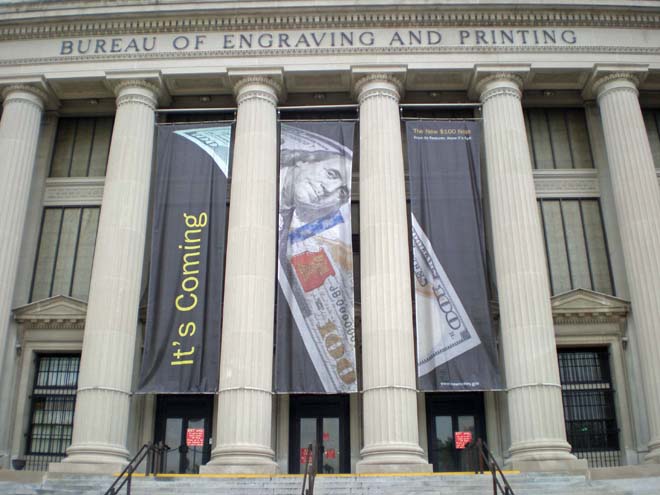 Due to a shortage of coins, the United States government issued the first paper currency in 1861, which were called Demand Notes. These notes gave the bearer the right to redeem them for specie (gold or silver) “on demand.”

Because it was easily available and its relatively high resistance to chemical and physical changes, green ink was chosen for the new money, hence the term greenbacks. Paper money was lighter than coins, and easier to carry and use, and quickly became the main form of currency in the country.

The first currency was engraved and printed by private banknote companies but signed by Treasury Department employees. In 1863, the government began printing currency along with private companies commissioned to do so. In 1869, the Engraving and Printing Bureau, the forerunner to today’s Bureau of Engraving and Printing, was created. By 1877, all United States currency was produced by the Bureau.

U.S. currency has been produced in several denominations over the years, the largest being the $100,000 Gold Certificate, Series 1934. These notes were printed from December 18, 1934, through January 9, 1935, and were issued by the Treasurer of the United States to Federal Reserve Banks only against an equal amount of gold bullion held by the Treasury. The notes were used for transactions between Federal Reserve Banks and were not circulated among the general public.

The Bureau of Engraving and Printing is the federal government’s most secure and efficient source of vital government securities. The Bureau of Engraving and Printing manufactures the financial and other securities of the United States. It designs, prints, and furnishes not only money, but also a large variety of security products, Treasury securities, government identification cards, naturalization certificates, and other special security documents.


In order to stay ahead of counterfeiters, the U.S. government continues to redesign our paper money on a regular basis.

Visitors can take a free 40-minute tour of the money making process at the Bureau of Engraving and Printing’s Visitor Center in Washington. The tour includes an introductory film and a gallery tour of the production process. 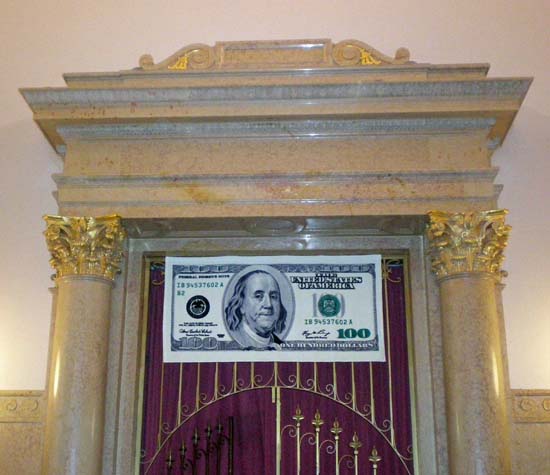 No photographs are allowed during the tour, but we could take pictures in the lobby and in the gift shop after the tour. The visitor center includes exhibits and currency products for sale. Here is a stack of $1millon in $10 bills! That’s a lot of money! 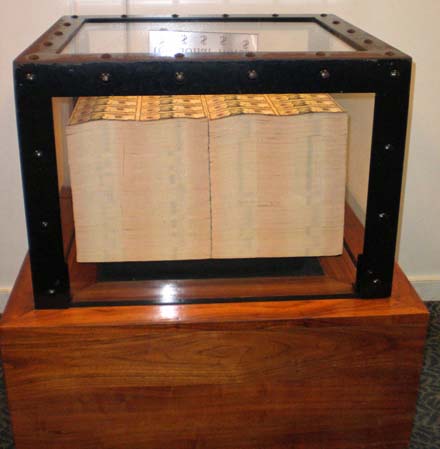 After the video, a very personable and knowledgeable guide led us through a doorway and up a short set of stairs to a catwalk where we could watch employees below us making money, in the truest sense of the world. There were millions of dollars being printed right in front of us as we looked on from above! The employees seemed like the pressmen in every shop I’ve been in, and not at all impressed that they were printing huge sums of money every day.

Our tour guide explained the many steps involved not just in the printing process, but also those necessary to make sure the finished bills meet the quality standards that the government demands.

Today’s paper money isn’t actually paper at all, but rather a special blend of 25% linen and 75% cotton. Various safeguards such as watermarks and special inks, as well as things our tour guide wouldn’t share with us, are incorporated into the bills’ design and production to make it immune from counterfeiters, though that doesn’t keep people from trying, and occasionally succeeding.

The bills are produced in large sheets, and each bill has its own individual serial number. These numbers are checked from the beginning to the end of the production process, and each bill must be accounted for. If somewhere in the production process, a bill or sheet of bills is determined not to meet the standards set by the government, it is destroyed, and a replacement is printed. You can tell if you have a replacement bill in your wallet because it will have a star in its serial number. Go ahead and check, I’ll wait here. 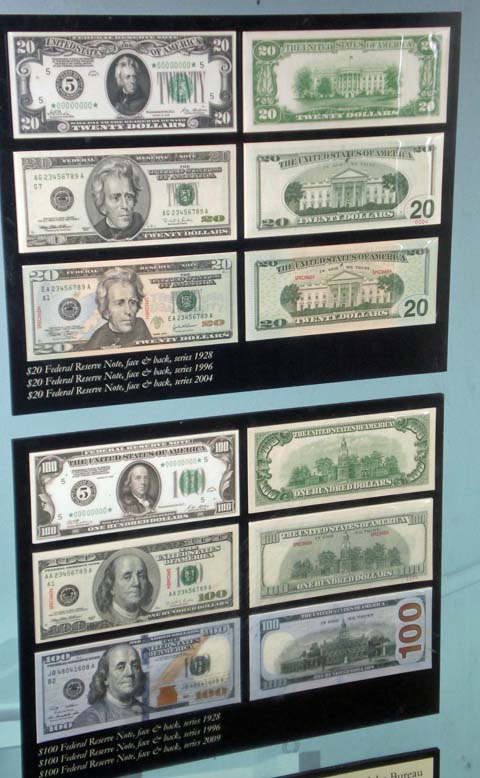 The tour ends at the gift shop, where visitors can see several different types of currency on display, and buy souvenirs of their visit, including bags of shredded money. 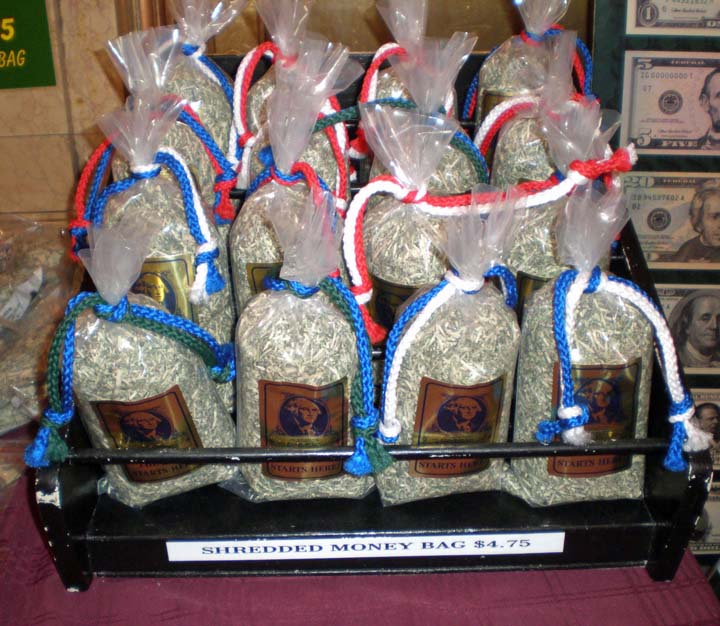 They also have a tall tube of shredded $100 bills and you can see how much money it would take to match your height. According to this, Miss Terry is about $1,491,000 tall, but I wouldn’t take a thousand times that for her! 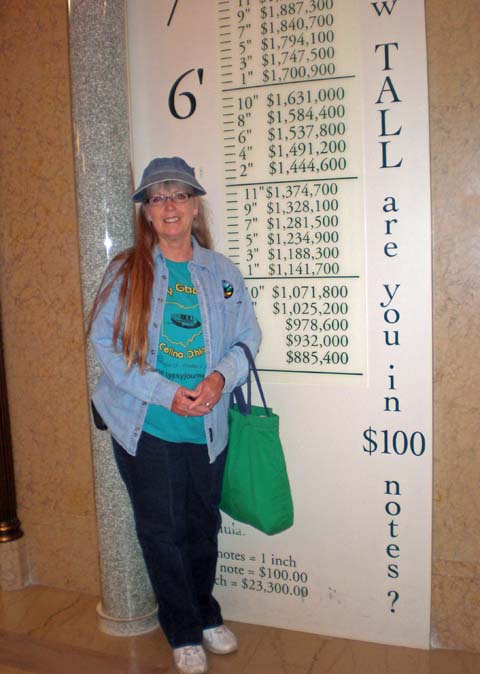 The Bureau of Engraving and Printing’s Visitor Center, located at 14th and C Streets, S.W. In Washington, D.C. is open Monday through Friday from 9 a.m. to 6 p.m., and tours run every 15 minutes. The Visitor Center is closed on weekends, Federal holidays, and the week between Christmas and New Years Day. All visitors are required to go through security screening.

During peak visitor times (March – August), free, same-day tickets are distributed at 8 a.m. on a first-come, first-served basis at the ticket booth on Raoul Wallenberg Place (formerly 15th Street). The booth remains open until all tickets for the day have been distributed. Lines form early and tickets go quickly, usually by 9 a.m. During our visit in late September, we arrived late in the morning, and there was no delay in taking a tour.

Thought For The Day – I never let my kids eat dessert until they finished all my vegetables.