Nick's Blog » Six Out Of Eight

I wanted to give you an update on our erosion control project. In a blog a few days ago I said that we tried sinking the first two 5-foot lengths of PVC pipe into the ground and got them down a foot or so and ran into rock or something and couldn’t pound them in any deeper. It was over 90° and pretty miserable out there so we knocked off and decided to go back at it the next day.


When we started the next day, Miss Terry found a piece of rebar that somebody had abandoned a while back and she used that to probe the ground in a circle roughly the diameter of where we wanted to put the next pipe. That did an amazing job of making things easier for us!

It only took a couple of hours to sink the next four pipes a couple of feet into the ground when she had prepped each location with the rebar. It really made a difference! It also helped that it wasn’t nearly as hot on that second day. So now we have six PVC pipes in the ground and still need to put two more in. 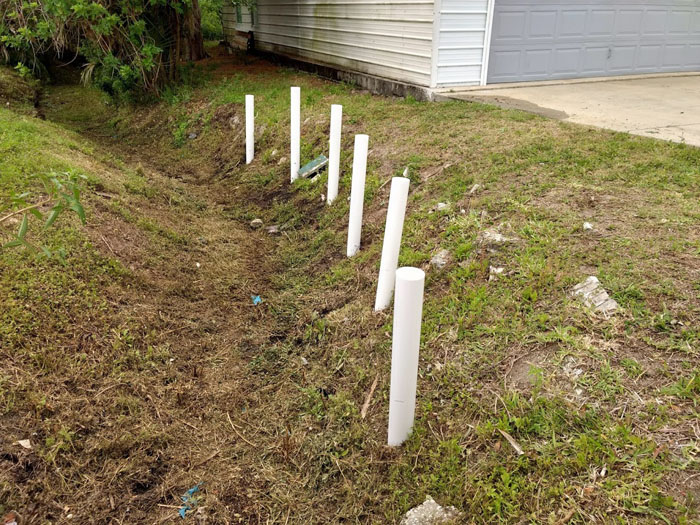 I also want to get them all down to the same height before we fill them with concrete. The engineer friend of mine who has been advising us told me to get a 5 foot length of three-quarter inch PVC and to glue a garden hose fitting on one end, making a water drill out of it. Then he said to stick it all away down in the PVC we are installing until it’s touching the ground and turn the water on and let it run until it starts breaking the dirt up so we can get down deeper. This is the same method they use to sink pilings for piers, just on a smaller scale.


A couple of readers have asked why we didn’t use some kind of metal fence posts instead of the PVC. We considered that, but we are 800 yards from salt water and things like that don’t seem to last long in this environment unless they are galvanized. And, because it will be bordering the county’s ditch, they won’t let us use metal because they say it will eventually rust and pollute the water in the ditch as it flows into the canal and then the Indian River, which is part of the Intercoastal Waterway.

They have a lot of dumb rules here. For example, the fish cleaning station on our pier had a fresh water hose to rinse things off with. Some bean counter from an office someplace came along and said that wasn’t allowed because the fresh water would pollute the salt water of the Intercoastal. I guess nobody told them that rain is fresh water, and so is the water flowing from the storm ditches like the one next to us.

Some readers have asked me how I feel about the cold laser therapy that I’ve had done on my back recently. Overall, I’m very pleased with the results. I am feeling a lot better than I was before I started it, and I’m continuing with it three days a week. When you consider that just a few weeks ago I needed two canes to walk and was in agony, and now I’m out pounding those PVC pipes into the ground, I think it’s made a tremendous difference.

It started raining sometime Sunday night, and has been pretty much nonstop since then. The weatherman says we will get a few short breaks, but that’s pretty much what we can expect for the rest of the week. I’m thinking that all that rain has to have softened the ground up somewhat, and when we do get one of those lulls between the storms we plan to get those next two pipes pounded in so we can proceed to the next phase of the project once the weather clears up.


And in closing, here is another funny sign from our collection acquired traveling around the country as fulltime RVers. 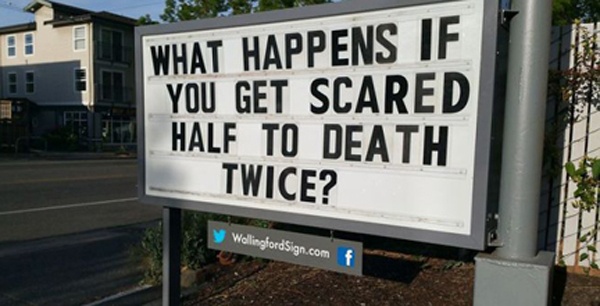 Thought For The Day – Find a group of people who challenge and inspire you; spend a lot of time with them, and it will change your life. – Amy Poehler

2 Responses to “Six Out Of Eight”