After reading yesterday’s blog about how quickly we filled up our house and garage after living in a motorhome for so many years, somebody e-mailed me to say that human beings are hoarders by nature and it’s ingrained into our DNA. Hey, I guess that’s as good an excuse as any.


We are about to take on another project here at the house. And this one is a bit intimidating. There is a county-owned flood control ditch that runs beside our property and feeds into a canal, which then feeds into the Indian River. Over time the bank on our side of the canal has eroded away. According to the man who mows our grass every week, and did for the previous owner as well, a piece of it about 20 feet long has lost about three feet in the last five years. 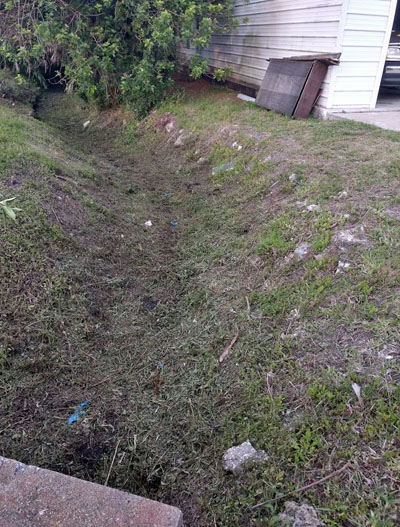 I had someone from Volusia County come out and check it out a year or so ago, and he didn’t seem to think it was a big issue. I guess if it’s not your place, it’s not a big deal. In the last year we’ve noticed that more of it has been lost and it’s getting close to our driveway. So the man from the county came out again this week and didn’t have much to suggest except that something needed to be done, but basically, it’s our problem to fix it.

In researching solutions, a while back I talked to a friend of mine who is an engineer and has built retaining walls and handled problems like this before. He said there are lots of ways to deal with it, and none of them are cheap. I, on the other hand, am cheap. My friend suggested that we try sinking some lengths of 4-inch diameter thick-walled PVC vertically into the ground at the edge of the ditch, fill them with dirt or cement for reinforcement, then lay railroad ties against the PVC tubes to form a rough seawall. Then we can haul in some fill to replace what has been washed away and raise it up to the proper level.

Stephen, my advisor, said to run water through a hose down into the PVC tube and it will help wash the ground away under it enough to make it easier to sink. This is basically the same technique they used to replace the pilings on our community pier after Hurricane Irma, only on a smaller scale. The other day I got a two foot long piece of the PVC and tried an experiment to see what it would do. Using just a piece of wood over the top of the PVC and pounding on it with a small handheld sledgehammer, I was able to sink it about 6 inches with no problem.


So yesterday we drove down to Lowe’s in Titusville, bought three 10-foot lengths of the PVC, had them cut in half, and then bought a post driver, which is basically a heavy-duty two-handed pounding device. We will give this a try and see what happens. I’ll let you know how it works out.

As we were driving into Titusville I noticed a bunch of cars parked along the water on US Highway 1 across from the Kennedy Space Center. It turned out SpaceX was going to be launching a Falcon 9 rocket, and lift-off was scheduled at 5:47 PM. That gave us an hour and a half or so to get our shopping done at Lowe’s and get back in time to see it. 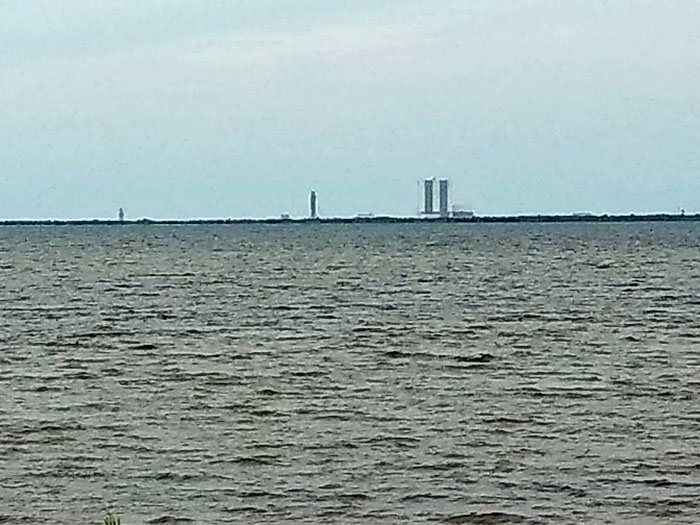 We have seen a lot of rocket launches from our place here in Edgewater but have never been in Titusville to see one lift off from the Space Center. We arrived about twenty minutes before the scheduled launch and waited. And then we waited some more. And some more. Then it was announced that the launch had been scrubbed at the last minute because of some kind of technical issue. They re-set it for today, but I don’t think we’ll drive back down again, since they are saying there’s only about a 60% chance of it going up due to the weather. If it does happen, we will probably just watch it from here, like we always do.

Be sure to enter our latest new Free Drawing. This week’s prize is an audiobook of A Shot In The Bark, the first book in my pal Carol Ann Newsome’s excellent Dog Park mystery series. To enter, all you have to do is click on this Free Drawing link or the tab at the top of this page and enter your name (first and last) in the comments section at the bottom of that page (not this one). Only one entry per person per drawing please, and you must enter with your real name. To prevent spam or multiple entries, the names of cartoon or movie characters are not allowed. The winner will be drawn Sunday evening.

Thought For The Day – A different you exists in the minds of everyone who knows you.

4 Responses to “Scrubbed At The Last Minute”