Anybody who knows me or has been reading the things I scribble every day for very long knows that for years my own personal rain cloud followed me around. Wherever Nick was, you can bet there was going to be bad weather.


Seriously. Once we were holding one of our Gypsy Journal rallies in Yuma, Arizona, and that desert city got more than a year’s worth of rain on the day we were parking a couple of hundred RVs that came in for the event. I’ve gone places that had not seen a drop of rain in three or four months, and they got a downpour the day I arrived. If you were sitting under your RV’s awning on a beautiful summer day and storm clouds gathered and you started to hear thunder rumbling and see lightning flashing, there’s a pretty good chance I was parked in the site next to you. If it was a pretty spring day when I showed up someplace, get out your parka and your mittens, because there was a good chance you were about to get hit by a snowstorm.

But since we hung up the keys and bought a house here on the east coast of Florida, things seem to have changed. Apparently I have traded my storm cloud for an umbrella. We have been amazed at how many times the weather reports have told us to prepare for heavy rains and strong thunderstorms, and about the time it got to us the bad weather suddenly went north or south. Sometimes the storms even split and go on both sides of us, leaving us with a sprinkle at most. Of course, you know what that means. Apparently now I can bring drought anywhere I go.

We had a visitor when we went outside yesterday morning. This fellow was in the middle of the street and came into our driveway, where he headed for the flood control ditch next to our property. It’s a gopher tortoise, and they are found all over Florida. They get their name because they live in burrows underground. He (or she) was a good sized specimen, close to two feet long. 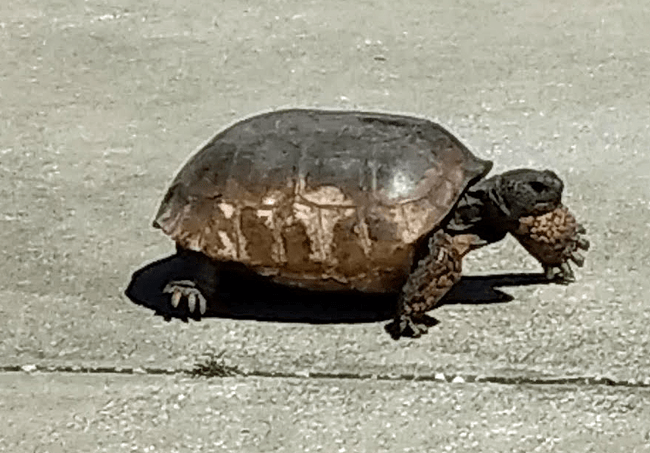 The other day I mentioned that we had installed some Arlo security cameras in the house and garage. Yesterday we put up the last two, one in the carport where a door leads to my office, and one by the front door. Here is Terry making the final aiming adjustments to the one on the carport. 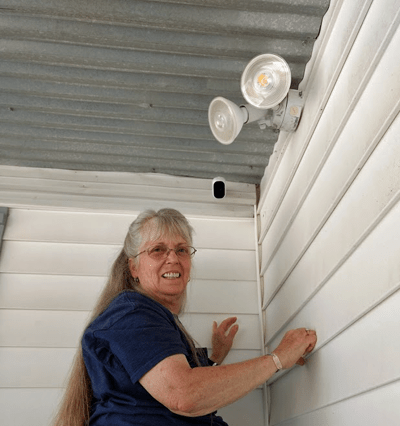 They have a very wide field of view and we are both amazed at the quality of the video these things put out, even in the dark. With no lights on in the carport, just ambient light, I went outside about 9:30 p.m. and walked around under the camera near the door and Terry could easily tell who it was.


If you want a security camera for your RV, or to monitor your pets when you are away, these are something to consider. They are battery-powered, so you can even use them when boondocking. They do require WiFi however, as most of the modern security systems do.

I’m not sure what’s on the game plan for today. We may make a quick run down to Titusville to pick up a few things at Lowe’s and have dinner at Asian House Chinese restaurant, which we discovered a while back and were really pleased with. Or, we may just stay home and write and weave. We’ll see what the day holds in store for us

Thought For The Day – Friendship is born at that moment when one person says to another: “What! You, too? I thought I was the only one.” – C.S. Lewis

3 Responses to “I Traded”